By NewsroomSeptember 7, 2021Conservation, Science and technology
No Comments 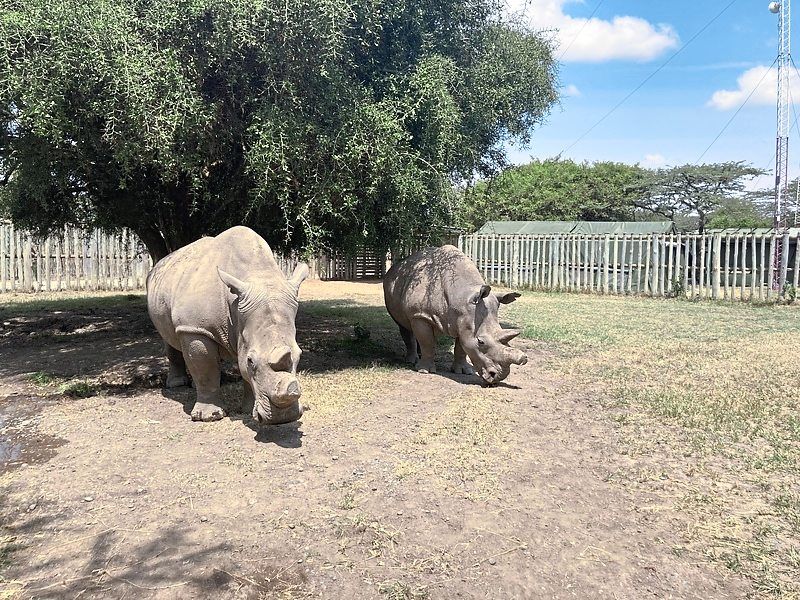 Najin, left, and her daughter Fatu graze at the Ol Pejeta Conservancy. Scientists are hoping to save the northern white rhino from extinction with an elaborate procedure that includes harvesting their egg cells. Image: As originally published by The Star.

A sustained groan can be heard from one corner of the enclosure as Fatu, a 1.8-ton northern white rhino, is being put under general anaesthesia. She sinks to the ground, surrounded by German and Kenyan veterinarians monitoring her oxygen levels and pulse.

There’s little room for error during the procedure: Fatu and her mother, Najin, are the last of their subspecies.

The two animals have been living in the Ol Pejeta Conservancy at the foot of Mount Kenya since 2009, where they are guarded by armed rangers.

According to veterinarian Stephen Ngulu, who has looked after them for six years, Fatu is a “gentle giant”. She often comes to greet him, grunting and demanding to be petted.

The mud covering her giant belly has dried, her grey skin feels coarse. Fatu has a broad mouth with which she calmly grazes – her species is also known as the square-lipped rhinoceros.

Fatu seems unaware of all the hopes that have been pinned on her. An international syndicate led by Thomas Hildebrandt from the Leibniz Institute for Zoo and Wildlife Research, Germany, is trying to save the species from extinction.

“If we save the northern white rhino, we directly and indirectly save hundreds of other species that are closely associated with this animal,” Hildebrandt says.

The northern white rhino plays a key role within the ecosystem, fulfilling several functions like distributing seeds for many plants.

The researcher’s team collects Fatu’s egg cells every couple months, which are fertilised with the sperm of a dead male in a lab in Italy.

The group has already grown 12 embryos, with all eggs coming from Fatu. Taking eggs from her mother, Najin, has been less successful.

The embryos are to be implanted into a surrogate mother of the related southern white rhino subspecies. Fatu herself has cysts on her uterus, while the much older Najin has cancer.

Extracting egg cells requires precision. The Berlin-based team usually arrives with 500kg of equipment – a gigantic ultrasound probe specially developed for the procedure. The black case is marked to let airport security know that it’s research equipment, not a weapon.

Once the animal is anaesthetised, Hildebrandt’s colleague, Robert Hermes, kneels behind Fatu and gives her an enema. Then he inserts the probe, with which Hildebrandt punctures the ovaries.

His colleague, Susanne Holtze, operates a hand pump with which she pumps a red liquid containing the valuable oocytes into a bottle. It’s immediately taken to a nearby container to be cooled.

During all of this, Fatu barely moves, only emitting a snort now and then. Frank Goeritz is responsible for the anaesthesia. In the background, beeping devices are monitoring Fatu’s vital functions.

The entire procedure is monitored by the Kenya Wildlife Service, which has been responsible for the welfare of the country’s wildlife since 2009.

The northern white rhino was never native to Kenya. Fatu and Najin’s ancestors used to live in swampier parts of Africa, such as Uganda, Sudan, Chad, the Central African Republic or the Democratic Republic of Congo. They were sometimes hunted, caught between civil war fronts or sold to foreign zoos – like the Dvur Kralove Zoo in the Czech Republic, where Najin and Fatu were born.

In case the team succeeds in breeding a herd, some experts would like to see the animals returned to their native environment.

But it’s still a long way until then.

The Kenyan Wildlife Service is currently mulling whether to allow the procedure on rhinos living in Kenya, which the scientists believe would yield higher success as their fertility is often better than that of their conspecifics (members of the same species) in European zoos.

Time is running out, warns Goeritz, adding that a living calf is vital for the development of a new population. People who are sceptical about the project are more likely to be won over if the subspecies is not yet completely extinct, he says.

And a newborn calf should get the opportunity to cohabitate with the last of its kind and to learn species-specific behaviour, explains Holtze. This includes social behaviour and specific dialects that distinguish the northern from the southern white rhino, he says.

After the egg cell extraction is completed, Fatu’s horn is shortened with an electric saw before she wakes up again, to stop poachers from injuring or even killing her.

The smell of burnt hair – keratin – lingers in the air.

Slowly, Fatu gets up, still wobbly on her feet. Somewhat dazed, she trots around the enclosure, watched for several hours by doctors and keepers. While she recovers from the surgery, her mother Najin and a southern white rhino keep her company.