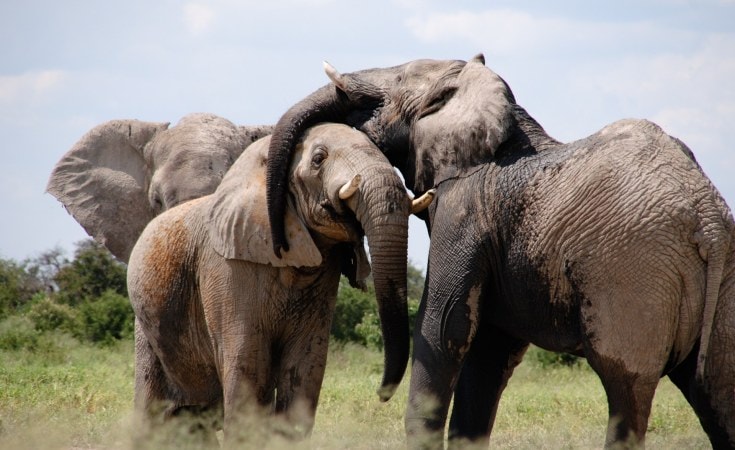 Elephants embrace each other. Image: Pexels.

Zimbabwe is considering mass killing of elephants for the first time since 1988 in a bid to reduce the 100,000 strong population of the animals and protect the environment.

The proposed culling, along with a plan to sell 500 elephants to professional hunters, is part of the country’s efforts to depopulate its national parks, Environment minister Nqobizitha Mangaliso Ndlovu said.

Zimbabwe has over the years come under attack from animal rights groups over its decision to sell baby elephants to Chinese zoos, and the proposal to cull the animals is likely to be met with fierce resistance.

“A lot of noise is coming from people, who have no genuine interest in the conservation that is taking place in Zimbabwe,” Mr Ndlovu told the State-owned ZTN television network.

“We are trying to reduce the numbers. We have to discuss at policy level. Options are on the table, including culling. We haven’t made a decision on that.”

The Zimbabwe Parks and Wildlife Management Authority (Zimparks) says the country killed more than 50,000 elephants on five occasions between 1965 and 1988 to manage populations at its game reserves.

Zimbabwe Professional Guides Association chairperson, Rob Lurie, said culling was one of the ways the country could manage its big elephant population.

“It’s a big animal, it eats a lot, it wanders a lot and does not stay in one place, so the next best tool is the harvesting of it by culling,” Mr Lurie said.

“It’s not an easy task and would require a lot of manpower and financing to be done correctly,” he added.

Zimbabwe has the world’s second-largest population of elephants after neighbouring Botswana. Zimparks says the large number is causing massive destruction of habitat needed by other species and is a threat to human life in communities surrounding game reserves.

Last month, the authority said it will soon start selling rights to shoot 500 elephants this year to raise money for conservation activities.

Zimparks said declining tourism revenues owing to the outbreak of Covid-19 was one of the reasons it was selling the elephants.

Countries such as Zimbabwe and Botswana, however, have seen their elephant populations grow significantly in the past few years.