By NewsroomFebruary 11, 2020Anti-poaching
No Comments

Government has purchased more body bags and more military personnel are due to be deployed to rhino poaching hotspots as the State mounts a ‘war’ to save rhinos whose population is reportedly on the brink of extinction in the country.

Ministry of Environment, Natural Resources Conservation and Tourism permanent secretary, Oduetse Koboto told Mmegi that strategic interventions on the rhino crisis are being finalised, but in the meantime more body bags had been already ordered to cater for the expected higher fatalities amongst poachers. 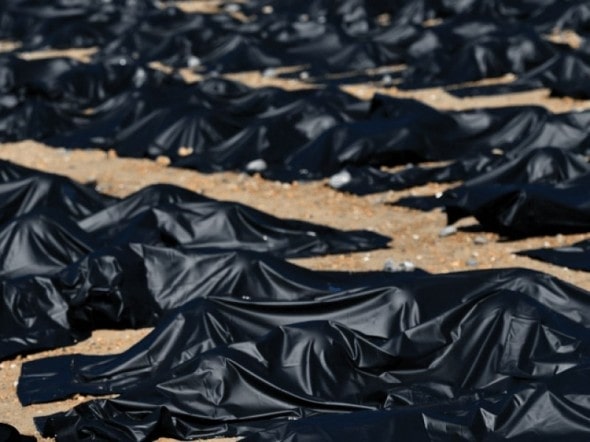 Original photo as published by Mmegi Online: More poachers to be shot.

Cabinet is due to soon consider a raft of interventions proposed by the ministry and other experts to stem the poaching crisis in which 35 or so rhinos have been slaughtered in the past nine months, leaving the overall population at dangerously low levels. Since April last year, the country has been losing up to two rhinos per week, prompting government to issue a rare admission last October that the frequency would wipe out the beasts in “one or two years”.

Government officials, from the ministry up to President Mokgweetsi Masisi are playing their cards close to their chests on what the planned interventions are, saying any revelations would forearm poachers.

However, Koboto said ahead of the decision on which interventions to adopt, the “shoot-to-kill” policy had been fortified.

“The issue of the number of bodybags does not have to wait for the strategic interventions; that one we have already done it,” he told Mmegi.

“If anything happens, we will not shy away from taking these people out when they put our people at risk. “Anyone who puts our people in danger, we expect that they will be brought in alive or dead. The bags are to collect them.”

It is understood the Department of Wildlife and National Parks has stepped up its intelligence gathering efforts to root out the drivers of the onslaught on rhinos and the strategic interventions to be considered will speak to the data gathered.

“Poaching is not a straightforward activity when it is being done by professionals,” Koboto said. “Sometimes, these people even go beyond what we would
anticipate, in terms of their planning. They invest in these plans because the activity is high risk and they come up with strategies to beat ours.

“In some cases they may even infiltrate our operations to try and get information about what we are planning.” He added: “We are working to establish networks and we have an idea of what is going on. Our strategic actions will look at that.

“These incidents previously were not happening and we have to invest in this area of knowledge. “We want to know how they are operating and the information they have.”

Koboto said strategic decisions were due to be taken urgently as the crisis was continuing. “We may announce the nitty gritty of what we will do because they will try and counter that. However, we will be clear on the objective.

“There are trials of some actions also taking place on the ground because this is an ongoing concern.

“As we sit here, the problem is going on.”

The latest rhino crisis is not without precedent, as in 1992, poachers ran black rhino numbers to zero and white rhinos to just 27. Aggressive interventions by the Botswana Defence Force, government policy to move the beasts into sanctuaries saw numbers gradually rise.

Relocation exercises from South Africa also helped shore up the numbers, before the crisis which came to light last year.

“People may think we are not doing anything about this problem, but it does take time.

“We are also working with our partners in the private sector on this.

“This type of situation is not like buying bread from a tuckshop; it’s a difficult matter and we are also asking the media not to sensationalise it.

“We don’t want to lose our men on the ground and in fact, the security of our people is the priority here,” Koboto said.