By NewsroomAugust 27, 2020Anti-poaching, Science and technology
No Comments 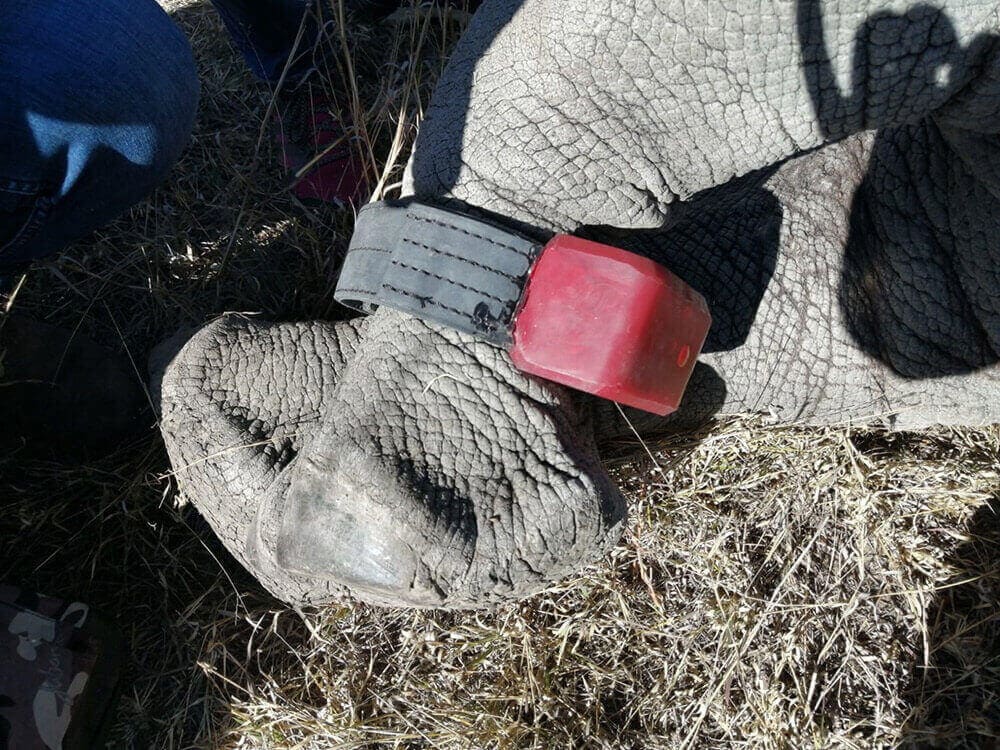 Tracking collars are attached to the rhino’s front legs, as seen here. Photo as originally supplied by Digital Matter.

Poaching has been a persistent problem plaguing the animal kingdom since ages. While the dead wild animals were treated as trophies by the royal families earlier, in current times, they have become targets of greed.

The incessant incidents of poaching of wild animals have led to large decline in iconic mammals such as elephants, rhinos, zebras, and gorillas.

Governments world over are continuously struggling with this menace. The forest departments have tried cameras and sensors but without much success. With the rural population involved in the crime, it becomes all the more difficult to track the poachers and save the animals.

Countries like India and Africa are rich in biodiversity and consequently face the brunt of poaching greatly. One horn rhinos are a popular target for poachers.

According to TRAFFIC, the wildlife trade monitoring organization, South Africa is home to about 80 percent of the world’s 29,000 rhinos.

Though 2019 is the third year in a row the number of rhinos poached in South Africa has dropped—from a high of 1,215 in 2014—African rhinos remain under severe threat from poaching and habitat destruction.

For these reasons, very few African rhinos now survive outside of protected areas and sanctuaries.

In addition to reducing demand for rhino horns, conservationists are implementing proactive and preventative anti-poaching technologies to protect rhino populations across Africa. GPS Tracking is enabling conservationists to track the movements and location of the animals. This help in rescuing injured or orphaned rhinos due to poaching.

In partnership with Rhino 911, a not-for-profit organization providing helicopter rescue to injured or orphaned rhinos due to poaching and other injuries, TG Tracking is using the Oyster2 battery-powered GPS and Telematics Guru to help prevent poaching in South Africa.

Designed for location tracking, behavior monitoring, theft recovery, and more, the Oyster2 is installed or concealed on, or in, all sorts of assets – mainly industrial ones, like vehicles, trailers, containers, and more.

But when it comes to tracking rhinos, well, things get a bit more complicated.

Safely Securing a GPS Device to a Rhino

Prior to fitting animals with the custom collars, the Osyter2 is provisioned using a Device Management platform, where the frequency of location updates, geofences, accelerometer settings, and other tracking parameters are carefully set.

In order to protect both farm managers and the animals themselves, the rhinos are first sedated from helicopters and safely guided to a clear, unobstructed area. Collars are attached to the rhino’s front legs.

The time of collaring, veterinary information, and more information on the animal is captured and saved in Telematics Guru. The rhinos are then closely monitored as they regain movement.

Anti-poaching units monitor the rhino’s locations 24 hours a day. Location data captured by the Oyster2 is also used to understand daily routes and distance travelled, areas of grazing, and other general behavioural patterns to ensure high-traffic areas are always protected.

Geofencing works alongside location tracking by creating a virtual boundary around specific areas of the park. If animals move beyond these boundaries, units are immediately alerted. Geo-fence downloads and alerting allow the farmers to be informed if the Rhino has moved out of its usual behavioural locations – possibly due to poaching.

The Oyster’s 3-Axis Accelerometer enables smart movement-based tracking features. If the rhino reaches a certain speed for a set amount of time, a “running alert” is triggered, alerting units of a possible disturbance on the grounds.

Immobility, or “rhino down” alerts are also configured and immediately triggered if the animal stops moving for a configurable amount of time.

Recovery mode is available on the Telematics Guru tracking app, a one-touch button which activates live-tracking at 30 second intervals, allowing units to follow the rhinos path in real-time if injury or poaching is expected.

These features make the GPS solution an excellent innovation for ensuring that the wild animals live safely and peacefully in their habitats. TG Tracking tracks leopards and elephants as well using Digital Matter’s wide range of devices.