Guardians of the northern white rhino: The world’s most endangered species

By NewsroomOctober 26, 2021Photography
No Comments 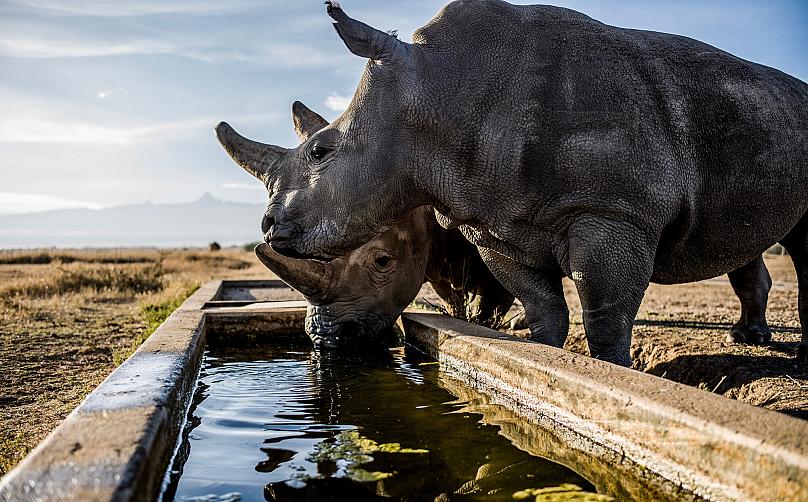 With no male northern white rhinos left on the planet, these photos are a love letter to the armed guards protecting the last two remaining females, Fatu and Najin.

The rhino duo, a mother and daughter, were born in captivity in European zoos and were brought to the sanctuary along with two other males back in 2009. It was hoped that a return to their native environment would increase the chances of reproduction.

By 2018 both males had died and the fate of the species was left in the hands of the two females, a team of German scientists, and their armed protectors.

A Biorescue team led by researchers from the Leibniz Institute for Zoo and Wildlife Research in Germany, has been racing against time with a breeding program including IVF techniques, which use the frozen sperm of dead male rhinos.

Last week however, the team announced they had decided to retire Najin, a 32-year-old northern white rhino, from their breeding program for ethical reasons. Effectively leaving the fate of the species on the shoulders of her daughter, Fatu.

Once common across northern Africa, the northern white rhino subspecies has suffered catastrophic decline due to widespread poaching and civil war in their native habitat and are now considered extinct in the wild.

Najin and Fatu reside in a 700-acre enclosure with 24-hour armed security. The caretakers who patrol the park encounter the likes of lions and marauding poachers, the latter of which fired on the guardians in 2018 leading to a firefight that left three poachers dead.

The aim of the contest is to share important global stories, in order to focus our eyes and minds on issues that are current and crucial in our world.

‘No Man’s Land’ opened to the public yesterday along with other winning works at the Px3 Paris Photo Prize exhibition, which is open until October 31 at Espace Beaurepaire in Paris.