Herd of wandering elephants finally head for home after 17-month, 300-mile trek across China that captivated the world

By NewsroomAugust 10, 2021Global conservation
No Comments 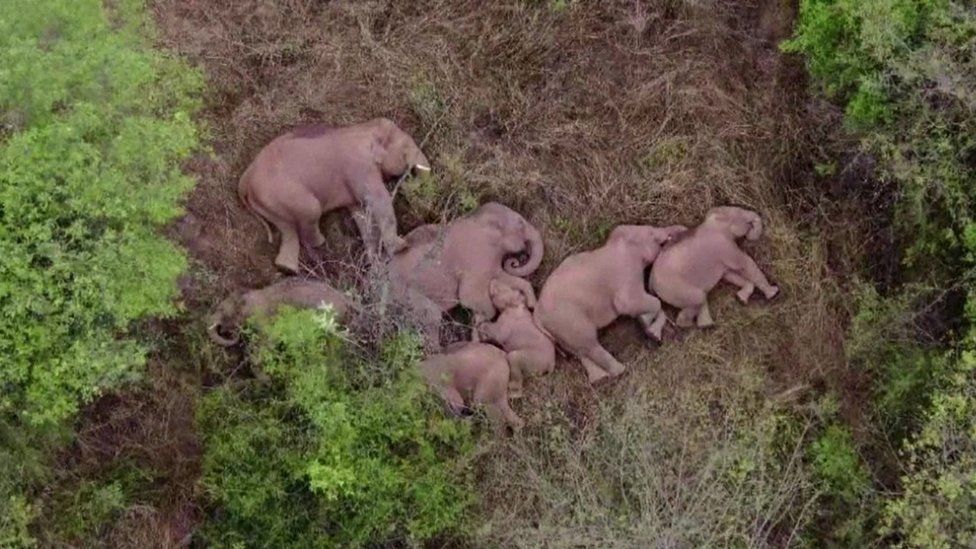 The herd taking a nap. Image: As originally published by Daily Mail

A herd of wandering elephants are finally heading for home after a 17-month, 300-mile trek across China that has captivated the world.

The 14 Asian elephants have given birth to two babies, caused more than £760,000 of damage, gone viral for taking a nap, sucked in 400 emergency personnel, some 120 vehicles, and an armada of drones on their odyssey.

The herd was spotted roaming across a plantation in Yuanjiang county, Yunnan Province, on Saturday, around 125 miles north of their home nature reserve in southern Yunnan.

The trunk-swaying convoy got underway in March last year, leaving their long-standing natural habitat to traverse busy highways, city centres and housing estates, in a journey which has stumped scientists.

On the way, they have been raiding shops, smashing doors, stealing food, heading into people’s homes and even taking a group nap in a widely-shared photo taken earlier this month, which scientists now believe shows how exhausted they are.

After reaching the outskirts of Kunming, a booming metropolis filled with businessmen and tourists, they turned south again.

For years, it has been common knowledge that elephants are incredibly intelligence creatures, something which makes the unprecedented journey as mystifying as it is is fascinating.

Joshua Plotnik, assistant professor of elephant psychology at Hunter College at the City University of New York, told the BBC: ‘The truth is, no-one knows. It is almost certainly related to the need for resources – food, water, shelter – and this would make sense given the fact that, in most locations where Asian elephants live in the wild, there is an increase in human disturbances leading to habitat fragmentation, loss and resource reduction.’

Some experts believe the mammoth journey could also be to do with the social dynamics of the herd.

Elephants are matriarchal animals and usually follow the oldest and wisest female.

But after puberty, males break off and travel alone or with other elephants of the same sex, only meeting up with females to meet before leaving again.

Chen Mingyong, a professor at Yunnan University, has suggested the matriarch of the herd may have ‘led the whole group astray’, possibly because she was ‘lacking in experience’.

This herd started off as a group of 13 females and three males, two of which peeled off after a month and the third parting just weeks ago.

Ahimsa Campos-Arceiz, professor and principal investigator at the Xishuangbanna Tropical Botanical Garden, said: ‘It’s not unusual, but I’m surprised he stayed that long. It was probably because of unfamiliar territory. When I saw them walking into a town or village, they were moving closely together – that’s a sign of stress.’

This herd started off as a group of 13 females and three males, two of which peeled off after a month and the third parting just weeks ago.

Ahimsa Campos-Arceiz, professor and principal investigator at the Xishuangbanna Tropical Botanical Garden, said: ‘It’s not unusual, but I’m surprised he stayed that long. It was probably because of unfamiliar territory. When I saw them walking into a town or village, they were moving closely together – that’s a sign of stress.’

Another expert said the photos of the elephants sleeping in a forest near Kunming, in China’s southwest Yunnan province, is uncommon.

Lisa Oliver from Game Rangers international based in Zambia said babies normally sleep on the ground and adults lean against something so they can get up quickly in the event of danger.

‘So much of their communication is infrasonic sound – the vibration of their feet – but in the towns and cities they are hearing the sounds of vehicles.’

The herd has not followed a fixed route, with scientists in agreement that they were not migrating.

China is one of the only countries in the world where the population of elephants is growing thanks to conservation efforts and a crackdown on poaching, with numbers in Yunnan province rising from 193 in the 1990s to 300 today.

But the effects of deforestation and urbanisation have reduced habitats and experts believe this herd could be looking for a home with better access to food.

The Chinese government, local authorities and conservationists have been working together to track the animals and study their habits on the trek.

On their journey officials have used food bait including corn, pineapples and other delicacies, and have blocked roads in an effort to redirect them to safety.

The elephants were guided across the Yuanjiang river on Sunday night and a path is being opened for them to return to their home in the Xishuangbanna Dai Autonomous Prefecture.