By NewsroomFebruary 12, 2021Anti-poaching
No Comments 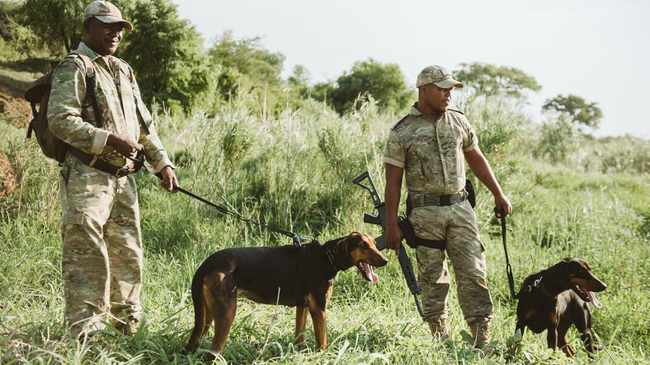 The ecently established dog unit, known as HiP K9 Unit will operate inside Ezemvelo’s Hluhluwe iMfolozi Park (HiP) and aims to stop rhino poachers in their tracks. (Image: As originally published by IOL)

KwaZulu-Natal’s fight against rhino poaching has been given a boost following the collaboration of private sector organisations and Ezemvelo KZN Wildlife who have bandied together to establish a dog unit.

The recently established dog unit, known as HiP K9 Unit will operate inside Ezemvelo’s Hluhluwe iMfolozi Park (HiP) that has been the scene of gruesome poaching in recent years.

And already the unit has had success.

Since its inception six months ago, it has carried out numerous interventions which have resulted in three notable successes with three arrests and a number of poaching groups interrupted before they have poached a rhino.

Between November 16 and 23 last year, in one of the bloodiest, seven white rhino carcasses were found at Hluhluwe iMfolozi Park after being killed by poachers.

The drop in poaching has been attributed to the country’s hard lockdown to curb the spread of the coronavirus.

A statement by Ezemevelo Wildlife and Wildlife Act – a registered non-profit organisation which was established in 2010 with a vision to save Africa’s iconic and endangered species from extinction – the K9 Unit has adopted a proactive approach to apprehend poachers before they poach rhinos.

Some of the operational expectations regarding this unit is that it is used to intercept poaching groups before they shoot rhino. The unit also needs to align well with other law enforcement agencies that are actively involved in combating rhino poaching, the statement said.

The partners who have been critical in the establishment and funding of the K9 Unit are in addition to the Wildlife Act are Hills Pet Nutrition, Save the Rhino International, Wild Tomorrow Fund and Shannon Elizabeth Foundation.

Expressing his excitement with this initiative, Dennis Kelly who is HiP’s Makhamisa Section Ranger and Project Leader of the K9 Unit said, “The use of canines is a very effective tool and has been used successfully in Kruger and in other parts of Africa.”

He said the dogs were useful in many ways for law enforcement.

“Their noses – which have 50 times more scent receptors than humans – are their most valuable tool allowing them to follow and detect specific scents.

“This is of crucial importance in combating ever determined and evolving poaching teams which have become more sophisticated and can easily hide their tracks once they are inside protected areas,” Kelly said.

The unit currently consists of two handlers and two “cold scent” dogs, Doberman/Bloodhound Crosses, which can follow older scents for up to 8 hours old.

According to Ezemvelo, there are already further expansion plans in place to establish a detection unit for gates (to check vehicles and people for animal products and firearms) as well as to procure and train another two Hot Scent Belgian Malinois combinations which can be put onto fresher tracks less than 4 hours.

The HiP K9 Unit has been effective within HiP for over six months, with daily operations that have included training, simulations, reaction and follow-ups.

They have carried out numerous interventions which have resulted in three notable successes with three arrests and a number of poaching groups interrupted before they have poached a rhino.

The HiP K9 Unit is used to react to the messages received through the high-tech early detection system situated in HiP’s Operational Command Centre.

Ezemvelo said this early detection system is part of the Smart Park initiative set up by Ezemvelo and various partners including the Peace Parks Foundation and Wildlife Act.

The Smart Park concept makes use of the latest technology, including camera traps and detection fences, placing Ezemvelo Anti-Poaching teams one step ahead of poaching suspects.

“The key to success of any K9 Unit is consistency over the long term, with dedicated handlers and dogs learning and understanding the landscape and the specific working environment of the park. It is great to be able to support the Unit and ensure all the elements of the Park’s strategy are enabled.” said Mark Gerrard, managing director of Wildlife Act.

The unit also works with the Project Rhino K9 Unit, a long-established team in the region with numerous successes.  This relationship ensures that the dogs and handlers gain the best mentorship, training opportunities and experience to be most effective.

Project Rhino is a collective of 32 like-minded conservation organisations, working together to address wildlife crime in the region.