By NewsroomOctober 7, 2019Anti-poaching, Conservation, Science and technology
No Comments

The devices provide park management with a real-time position of the critically endangered rhinos every hour. The locations are collected by the Smart Parks network and presented in the control room situated at the headquarters of the park. By knowing the whereabouts of the animal, the park can allocate its resources to protect the rhino more efficiently. 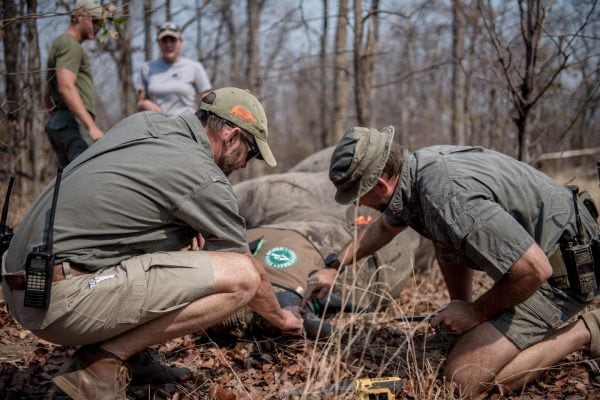 “The insertion of the GPS tracker unit in the horns of our rhino enables accurate live time tracking, a significant development in the monitoring and security of this vulnerable species. This is one of the most significant breakthroughs in rhino conservation in recent times.”

The new GPS-rhino tracker uses LoRaWAN™ to communicate, making it one of the most secure devices in the field of conservation. The protocol uses well-vetted algorithms for end-to-end security.

In previous situations, rhinos were tracked by either a VHF-tracker or a LoRaWAN™ Geoloc solution. The VHF tracker required a ranger to go into the field and detect the signal, which made it very labor-intensive and also a risk to security. The LoRaWAN™ Geoloc method (also introduced by Smart Parks) requires significant infrastructure and is less accurate than the GPS-tracker.

The rhino sensor is provided to parks for 150 euro. Smart Parks was able to develop this affordable sensor thanks to financial supporters of the Smart Parks Foundation, but also thanks to the vital support by the companies TAOGLAS, IRNAS, and the University of Amsterdam.

Important information for wildlife protectors
Smart Parks is equipping another 30 rhinos with the new tracker before the end of the year. Wildlife managers and conservationists can make pre-orders for new deployments or enquiries for collaborations by contacting: