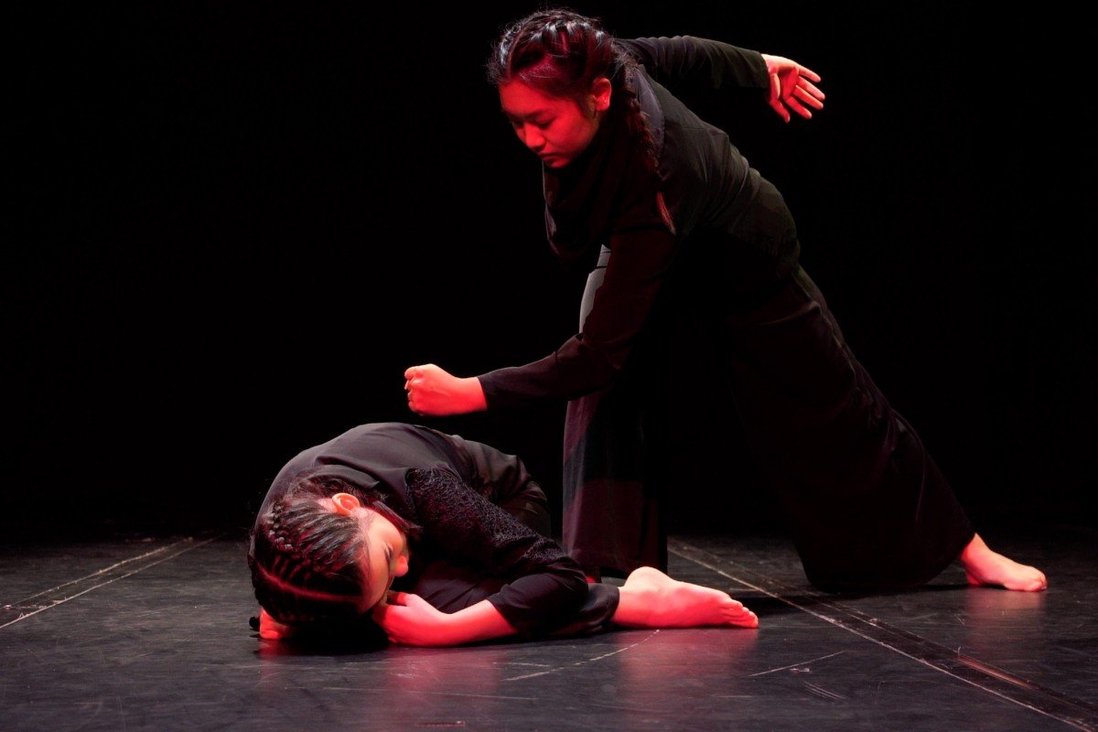 Dancers perform Tipping The Scales, to raise awareness about the plight of pangolins. Image: As originally published by South China Moring Post.

Tang is assistant director of Tipping the Scales, a dance film by the Hong Kong Youth Arts Foundation (HKYAF) that draws attention to the plight of the pangolin – the creature that has the unenviable title of the world’s most trafficked mammal.

For creative inspiration, Tang dug deep into the world of pangolins. “Pangolins have many distinct and unique characteristics and movements, such as curling up into balls as a defence mechanism, so we used these to help shape the choreography,” she says of the HKYAF film, which features the dancing of 11 girls aged between seven and 14.

Tang’s sister Caitlyn, 14, also performs in Tipping the Scales. Both are students at Chinese International School. “I was happy about the pangolin project because not many people know how endangered they are,” says Caitlyn.

There are eight species of pangolin – four in Africa and four in Asia. All are at risk of extinction, according to the International Union for Conservation of Nature (IUCN). “And compared to other animals, they don’t get as much coverage,” Caitlyn adds.

Another dancer is 11-year-old Izzie Young of Shema Academy. “What I’ve learned is that pangolin scales are made of the same material [keratin] as our fingernails, and that the scales are used to make medicine that doesn’t work,” says Young.

The poaching of pangolins has been fuelled by false claims in traditional Chinese medicine that its scales relieve ailments from asthma to poor kidney function, and can improve lactation.

“Pangolins are the most heavily trafficked mammals on Earth, yet many people still don’t know what they are, what their body parts are used for or even realise that Hong Kong has become one of, if not the, leading hubs for trafficking this species,” says Sam Inglis, wildlife programme manager at ADM Capital Foundation, a Hong Kong-based environmental non-profit organisation that supported the HKYAF project.

“From our research documented in the Trading in Extinction reports, it became apparent just how dire the situation is. At least 57 metric tonnes of pangolin scales and carcasses have been seized in Hong Kong since 2015. We’re talking about well over 100,000 animals being poached.”

Hong Kong’s legislature recently passed an amendment to include the illegal wildlife trade in the Organised and Serious Crimes Ordinance.

“The Amendment Bill is a major win for wildlife, providing a clear mandate and an array of tools to our city’s law enforcement to treat wildlife crime as ‘organised and serious’,” says Inglis. “Now that the government, legislators, NGOs and the wider public are unified on this issue, we have the impetus and powers necessary to take the fight to the organised and serious criminal syndicates who are profiting from this brutal trade.”

Inglis says engaging and educating the city’s youth is crucial: “They are our next generation of leaders, activists, politicians and consumers […] and they are the generation that will inherit a planet already under the severe pressures of climate change and environmental degradation.

“They have tremendous potential to divert us away from unsustainable and exploitative behaviours – and have the power to educate in their own right. They are our best hope for influencing their parents and grandparents, who are more likely to be the consumers of wildlife products.”

The performance is part of #BeTheChange, a HKYAF dance and spoken-word film series encouraging young people to tackle social issues through the arts.

“We have focused on issues concerning domestic helpers to the role of food banks and the impact of plastic pollution,” says HKYAF founder and director of the film Lindsey McAlister. “It’s a fun and engaging way to raise awareness about serious social issues.”