By NewsroomOctober 14, 2019Anti-poaching, Conservation
No Comments

The documentary Stroop: Journey into the Rhino Horn War should have torn apart any idealistic illusions that might encourage venturing into the horror of animal trafficking on the conjecture that deliberately dehorning rhinos and selling their horns is guaranteed to raise funds needed for rhino preservation.

This harrowingly emotive film was researched and made over four years by two courageous, determined women, Susan Scott and Bonne de Bod, who covertly penetrated the infernal underbelly of Vietnamese and Chinese trafficking syndicates to gain first-hand insight into the results of their iniquitous modus operandi.

Presently, the Convention on International Trade in Endangered Species bans international trade in rhino horn, but it is evident that some private rhino owners are illegally trading with Asian markets, even stockpiling horn in the expectation that prices will rise.

For so-called conservationists to advocate any attempt to become legally entangled with such enterprise is manifestly criminal and recklessly immoral. 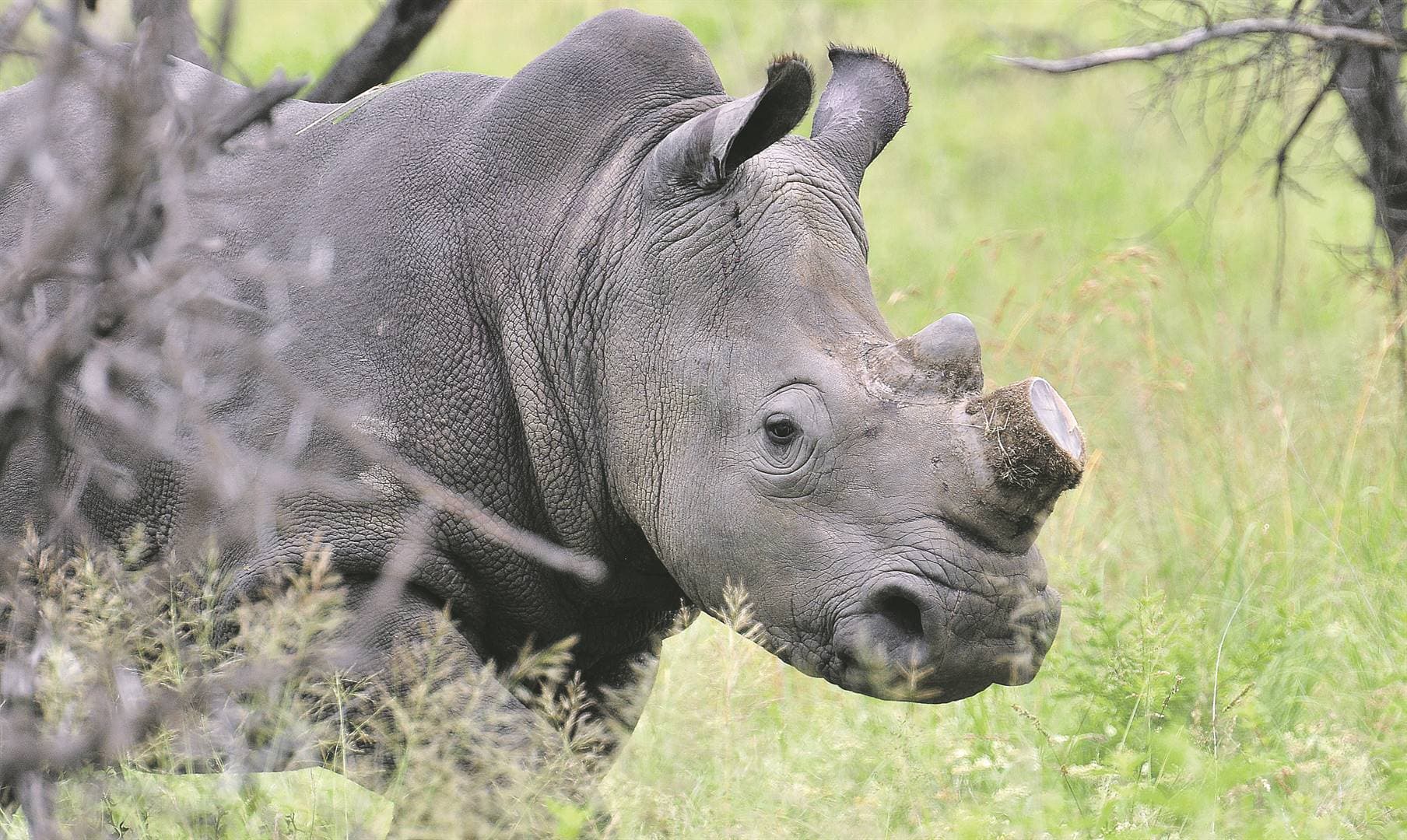 Original photo as published by City Press: A rhino stands after its horn has been removed at Nambiti Private Game Reserve. (PHOTO: Jonathan Burton)

Claiming the only way to quantify the value of rhinos is by utilising the monetary value of their horns, regarding them as commodities sold to the highest bidder, alarmingly plays into the notion that the only true value of anything is measured in financial terms – ignoring the fact that all creatures have inherent worth, regardless of their perceived value to humans, let alone to ruthless traffickers who reduce these iconic creatures to useless street-market items and fake cures.

Nineteenth century philosopher John Stuart Mill observed that animals are capable of suffering, maintaining that ethical actions are those which minimise pain and maximise pleasure.

This demonstrates that animals are subjects of ethical concern, disputing the anthropocentric view of the superiority of humans, assumed to bestow the right to manipulate and exploit all animal life.

Respect for animal wellbeing is a matter of justice, not merely compassion, according them the right to a flourishing existence.

Contemporary thinkers such as Peter Singer, Lori Gruen and South African novelist JM Coetzee are at the forefront of championing animal rights.

Animal rights theory emphasises the sentience of animals, possessing rights which accord them equal consideration and protection with humans.

Thus they should never be reduced to the status of a useful resource, existing primarily for the benefit of humans.

They have a right to not be tortured, mutilated, confined, hunted for sport, raised or trapped for their fur or other parts, or trained to perform in circuses and rodeos to entertain humans.

Linking human rights and animal rights emphasises that all exploitation of, and violence against, living creatures is inextricably interconnected.

Animal trafficking syndicates are frequently engaged in trafficking of women and children, as well as guns and drugs.

Anything that will garner high profit is regarded as fair game. Virtually all exploitation of animals is motivated by unscrupulous material greed that relegates animals to merchandise.

The case against legalising trade in horn also involves the means/ends argument. The ends do not justify the means.

If you believe the end goal is ethically justified, you must employ ethical means to achieve it, lest the integrity of the goal is sabotaged by the use of incompatible methods.

It is therefore morally inconsistent to advocate that breeding captive lions to sell for slaughter to opulent Americans with high-powered assault rifles lusting for blood sports is an acceptable method of conserving our irreplaceable wildlife in its natural habitat.

Attempting to stamp out poaching and illegal trafficking by engaging the traffickers in their own evil game, attempting to legalise what is essentially destructive and without moral justification is a travesty, is fundamentally flawed and lacks all integrity.

There is no foolproof way to distinguish legal from illegal rhino horn.

Supporting trade in horn sustains the myth of its medical potency, conceding that this fallacious conviction is ineradicable, its demand too entrenched to be defeated.

The documentary illustrates how continually capturing, sedating and mutilating rhinos to sustain trade in their horns is intolerably invasive, stressful and injurious to the wellbeing of these ancient noble giants.

Deprived of their horns, rhinos are rendered vulnerable, unable to dig for food and water, and stripped of the main means of protecting their young from predators such as hyenas.

Sustaining anachronistic, cruel practices that are inimical to human, animal and environmental wellbeing must be faced head-on, even if it involves uncomfortable discarding of medieval mind-sets.

Surely all compassionate humans should recognise these arguments as incontrovertibly conclusive and refuse to turn a blind eye to this continual shameful, human-imposed suffering.

I believe the single long-term approach to protecting creatures of this planet is to ban all trade in animal parts, rigorously focusing efforts on eradicating the machinations of depraved, avaricious poachers and traders.

Stroop* reveals the many combined initiatives involved, such as working together with rural communities near national parks, educating them to appreciate the value of wildlife for the long-term survival of our natural environment and discouraging men from succumbing to the temptation of recruitment by trafficking syndicates.

We must demand that our government show more commitment to saving its irreplaceable wildlife by acting decisively against the corruption of government ministers implicated in cover-ups of poaching and trafficking.

We must implement more efficient prosecutions of arrested poachers and immediately halt their devastating plunder.

Finally, we must recognise that rhino horn removed from the animals is a symbol of death and suffering, not life and health; that nature endowed rhinos with horns and this is where they belong.

*Stroop means to poach or, literally, “to strip bare”.

Diesel has a doctorate in religious studies from the University of Natal and is an animal rights activist.