How Gen Z is shaping the future of conservation 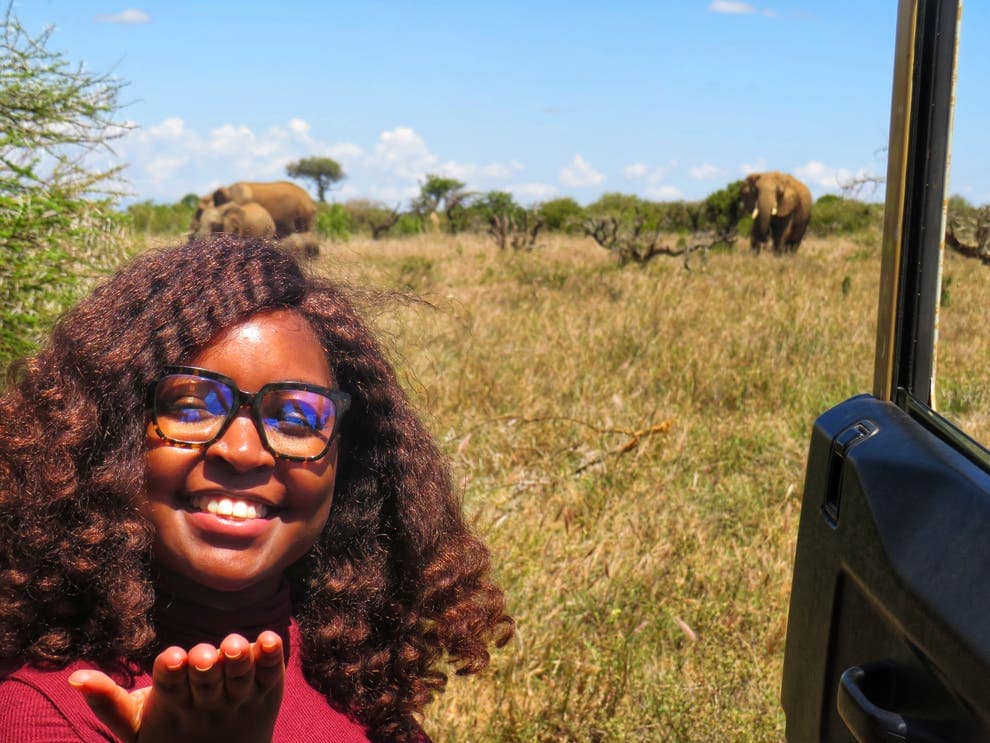 Idah Murithi meets some of the elephants she is determined to protect. Image: As originally published by The Independent

“Growing up, my grandma would tell me wonderful tales of how she lived side by side with elephants near Mount Kenya,” says Idah, who is a student at African Leadership University and interning with international conservation charity Space for Giants. Having lost close friends and family members to human-elephant conflict, Idah understands the urgent importance of educating communities about the value wildlife. “My mission is to mitigate human – elephant conflict by providing sustainable solutions that are beneficial to both the communities and wildlife,” she says. “We must do something now, [and] do the best we can. There is no planet b.” Now aged 23, Idah’s internship at Space For Giants sees her supporting the analysis of conservation science data and leading a community engagement project that aims to create educational conservation clubs in human – elephant – conflict hotspots.

“We, the Generation Zers, need to speak up now,” says Tumiso, a 15 year old self-styled wildlife warrior. “If we see conservation as a big problem it can be solved.” The eldest daughter of Kenyan musicians Wahu Kagwi and David Mathenge, AKA Nameless, Tumiso set up initiative Wildlife Savers to encourage young Kenyans to nurture their passion for wildlife and environment. calls on government leaders to increase support to community-led conservation. She calls on them to do what they can to fight to protect species and preserve ecosystems. “We are a very powerful generation,” Tumisosays. “Find your own way of helping. Speak to leaders. Speak to people with money. Do something to make positive change.”

“My generation is constantly fed digital content,” says Damilola, 19, who passionate about creating the most impactful visual ways to bring conservation information to a younger audience. As a student at Rwanda’s African Leadership University, he combines his commitment to wildlife with graphic design prowess, deploying “succinct text, contrasting colours, and clear imagery to tell stories and grab the attention of Gen Z.” Damilola is on a one year internship for Space for Giants, the conservation charity partner of The Independent’s Stop The Illegal Wildlife Trade campaign. He believes his peers are ready to take on the fight against illegal wildlife trade to protect wildlife. “The mantle is being handed over to us whether we like it or not,” says Damilola. “However, I believe we’re ready to take on that mantle and continue the work our parents have started.”

Emily was just 13 when she founded Kids Against Animal Poaching (KAAP) from her Los Angeles bedroom. After learning of the grave threats facing elephants, rhino, zebra and other species, Emily set up the non-profit to help spread awareness and fundraise, and since KAAP began working with Space For Giantsin 2016 it has raised over $100,000. Now aged 19, Emily launched the #StandTallForGiraffes campaign last year after learning that giraffes were on the path to extinction due to demand for their body parts and skin. Emily now is studying Industrial Engineering and Computer Science and International Studies at University of Michigan alongside running KAAP. She is currently working on Space for Giants’ Young Giants programme which is a platform to engage young people around the world who want to make a positive impact on the planet and its wildlife. “It really has been left to my generation to protect our planet’s wildlife,” she says. “We simply cannot wait any longer or these magnificent creatures will be gone forever.”

Kenyan conservation activist Tiassa is the founder of movement Teens f4Wildlife an advocacy and mentorship platform campaigning against poaching and illegal wildlife trade, and educating young people about environmental protection. “I’ve also always been interested in wildlife,” says Tiassa, 20. “At the age of 14 I began to really take a stance in wildlife conservation after I heard about the fast rates at which we were losing species.

“Teens4Wildlife, is a space for African youth to come together and share their thoughts and ideas, learn, discover, explore and value the importance of our wildlife, and then take charge to protect it.” Tiassa was also part of African Leadership Academy’s Redefine Expectation series, and her mission is to work the ground protecting animals.