How rhino surveillance has paid off

By NewsroomMarch 18, 2021Science and technology
No Comments 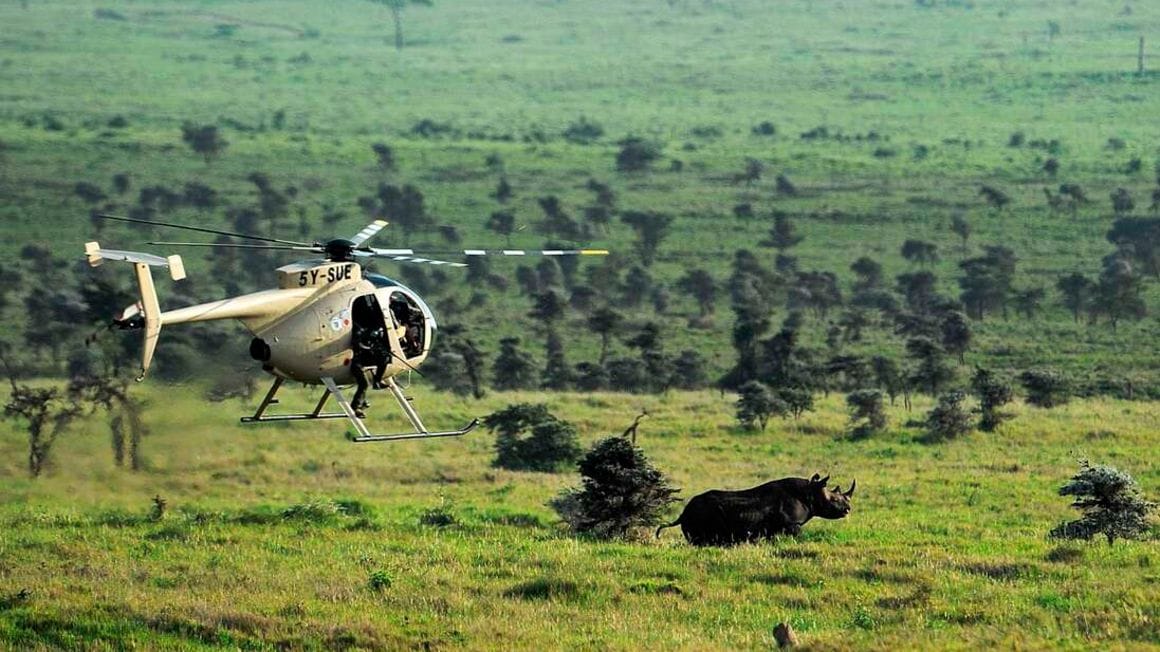 A Black rhinocerous attempts to get away from an approaching helicopter at a conservancy in Laikipia county. Image: As originally published by Business Daily.

Out of these, rhinoceros and elephants are the most targeted by poachers for their valuable horns and tusks, which are in high demand in Asian countries such as China.

Africa’s rhino population has been decimated over the decades to feed demand for rhino horn, which, despite being made of the same stuff like hair and fingernails, is prized in East Asia for its perceived medicinal value and as jewellery.

Over the years, frequent poaching saw their population plummet at an alarming rate.

The black rhinos are distributed in government land (303), private land (280), municipal land (39) and community land (one).

But, in March 2018, only two female northern white rhinos remained at the Ol Pejeta Conservancy in Kenya after the only surviving male counterpart (Sudan) died of poor health.

To protect the remaining two northern white rhinos from poachers, the private conservancy unit runs a team of seven dogs that includes bloodhounds and Dutch Malinois breeds as well as rangers who offer 24/7 security.

Their specialities are to track poacher scent, detect ammunition as well as attack and detain poachers.

On its part, KWS has also embarked on public-private partnerships (PPPs) to avert possible extinction.

The system uses human recognition software to monitor park boundaries, sending real-time video from the sensors back to the operations room.

Then, an alarm alerts KWS staff when a human or vehicle is detected. This enables the arrest of would-be poachers.

Tourism Cabinet secretary Najib Balala said there is a need to work with partners such as stakeholders, anti-poachers and intelligence-led operators to avert poaching.

“In 2020, zero poaching of rhinos was reported across the country,” he said.

Poaching in the country can be traced back to numerous administrative changes in the wildlife sector that saw the formulation of different policies and structures on rhino management.

Before 1970, policies were centred on land clearance for human settlement through problem animal control, protection in national parks/reserves and legal hunting of the rhino.

However, between the 1970s and 1980s, wildlife management worsened with poaching reaching a tipping point.

To reverse the trend, the government enacted the Wildlife Conservation and Management (Amendment) Act (CAP 376 No. 16, 1989, Republic of Kenya), which created the KWS.

Thereafter, a new policy framework was formulated that emphasised protection of rhinos through the creation of specially protected and fenced areas — sanctuaries.

Under the wildlife legislation, black rhinos remain the property of the State irrespective of the land tenure system in which they are found.

“We want to reduce this to zero,” says Mr Balala.

Last week, the Nairobi National Park stepped up surveillance on the endangered rhino species through new housing units that will be manned by armed rangers 24-7.

Through a public-private partnership, the KWS, Luigi Footprints and Maniago Safari Limited in collaboration with Stand Up Shout Out are constructing Sh25 million fully contained pre-fabricated containers that will house rangers to man the park.

Under the Dignity Housing Project, the houses will be equipped with modern amenities such as water tanks, kitchens, washrooms and solar panels.

KWS acting director-general parks and reserve management Charles Musyoki said the new facilities would provide a haven for rhinos at a time when they are facing extinction.

“They will house a 79-dedicated force that will monitor rhinos,” said Prof Musyoki who spoke on behalf of KWS director-general John Waweru.

The rangers are expected to protect the remaining 111 black rhinos and 24 southern white rhinos at the Nairobi National Park.

Rangers at the park are forced to stay in tents, which are insecure and prone to the vagaries of weather, which hamper their surveillance programs.

Mr Balala said there is a need for the project to be extended to other national parks and game reserves such as Meru National Park, Ruma National Park, among others.