How the battle to save rhinos became a full-scale war

By NewsroomOctober 4, 2019Conservation, Rescue and rehab
No Comments

Since 2008, poachers in Africa have slaughtered more than 7,900 rhinos for their horns, a tragedy driven by demand in Asia for the appendage’s purported—though nonexistent—medicinal properties. If the killing continues unabated, Africa’s 20,000-some remaining rhinos will vanish altogether by 2025.

This crisis is not new. In his 2013 book Killing for Profit, journalist Julian Rademeyer provided the definitive account of the situation, investigating the Southeast Asian kingpins and middlemen who finance the trafficking and the corrupt African officials who enable it, and exploring the various controversies swirling around it, like the much discussed option of legalizing the horn trade.

Alas, little has changed since Rademeyer (and other writers and filmmakers, including me) weighed in. In 2018, at least 769 rhinos were killed in South Africa alone. As far as storytellers are concerned, rhino poaching remains the gruesome gift that keeps on giving.

Now we have Save This Rhino, a two-part documentary airing on Outside TV from the award-winning surfing filmmaker Taylor Steele (available for streaming now on the Outside TV app; $5 for a monthly subscription). Unlike Rademeyer, Steele forgoes the big picture and instead keeps his focus narrow. Specifically, he has made an in-the-trenches combat film—and a quite compelling one.

Steele trains his lens on the park rangers, forensic investigators, and vets battling the poachers on the ground in and around Kruger National Park in South Africa, and we are reminded throughout his film that “this is a war.” One park ranger informs us that Kruger “has become a war zone. We have changed from conservationists to paramilitary personnel.” In another scene, Steele’s cameras venture into park headquarters, and we see guys in fatigues pouring over tactical maps, tuning up helicopters, and sorting through machine guns and night-vision gear. We are told that the place “feels like a military operation, not a wildlife reserve.”

This is a radical shift for Steele, a Californian who has spent his career making gorgeous films at the intersection of surfing and music, featuring the likes of Kelly Slater, Rob Machado, and Jack Johnson. Those three featured heavily in Momentum Generation, a critically acclaimed 2018 HBO documentary that achieved mainstream success and likely provided Steele with enough clout to finally break out of the surf-film genre.

Save This Rhino showcases Steele’s hallmark landscape visuals in the form of sweeping aerials over the semiarid bush, glowing African sunrises, and, in one inexplicable instance, a cheetah perched in a tree. We also get gruesome footage of bloody carcasses and traumatized baby rhinos. When it comes to wildlife poaching, you can’t have beauty without brutality.

Part one of the documentary focuses on the poaching problem, part two on potential solutions. The film’s two protagonists, Kevin Pietersen, a South African cricket star turned conservationist, and Matt Wright, the Australian host of National Geographic Channel’s Outback Wrangler, are spurred into action after meeting an orphaned baby rhino named Arthur at a sanctuary called Care for Wild.

Poachers have recently shot Arthur’s mother inside Kruger and hacked off half her face with an ax to get her horn. Rangers found Arthur whining next to his mother’s body, with deep gashes on his back and one foot, indicating that the tyke tried bravely to fight off the poachers. We see footage of a blindfolded Arthur with an IV drip being stretchered after the attack, lifted from a helicopter into the back of a pickup, and transferred to Care for Wild. Petronel Nieuwoudt runs the sanctuary and has saved 61 orphaned rhinos since 2012. She tells Pietersen and Wright that baby rhinos are often found trying to nurse from their dead mothers. After feeding Arthur from a plastic bottle and steaming over photos of his dismembered mother, the duo vows to dig deeper into the murder in hopes of better understanding the rhino crisis. 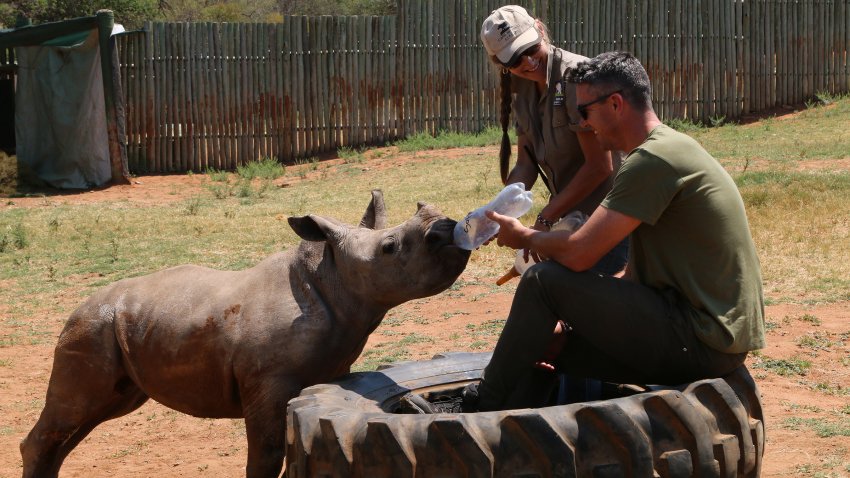 Original photo as published by Outside Online: (Photo: Courtesy Outside TV)

Their journey leads them to the crime scene inside Kruger, where Wright holds the sun-bleached skull of Arthur’s mother. They learn that two gunshots were heard at a nearby ranger station the night of the murder and that a pair of suspects was ultimately apprehended a few miles away. They also discover ten other rhino carcasses in various stages of decomposition in a 200-yard radius of the crime scene.

Kruger is a blood-soaked killing field. Later they come across a group of women and girls doing laundry and collecting water in a river inside the park. Their village abuts Kruger, but since it lacks running water, they enter the park through an opening in the fence three times a day. Clearly, these people need water to survive, but the compromised fence is like an “Entrance” sign for poachers. Four million people live along the edges of the park.

In part two, Pietersen and Wright bounce from one possible solution to the next. They go on night patrol with Kruger’s heavily armed rangers and learn that more than 100 rangers have been killed by poachers here in the last decade. They observe vets dehorning rhinos on a private reserve, a painless process designed to make the animals less attractive to poachers.

But the real ray of hope occurs when they visit another private game park next to Kruger that has been conducting a high-tech pilot program funded by Cisco Systems. By layering several technologies together—a long-range radio system, magnetic sensors to detect guns and axes, acoustic fiber to detect fence tampering, closed-circuit and pan-tilt-zoom cameras, thermal imaging, an 8,000-volt fence—the park had reduced its response time to intrusions from 30 minutes to less than seven. It had gone 436 days without a rhino being poached.

Still, all the technology in the world won’t stop poachers if local villagers aren’t on board. Pietersen and Wright spend time at Nkambeni Safari Camp, a community/private-sector tourism venture on land owned by the Nkambeni people inside Kruger. The project provides employment, education, and running water to the community, and other villages near Kruger view Nkambeni as a successful model. Pietersen talks to one school teacher in the community who expresses cautious optimism. “I think if there were job opportunities, it would drastically minimize the poaching in Kruger,” she says. “But you can never take away the greed from some of the people.”