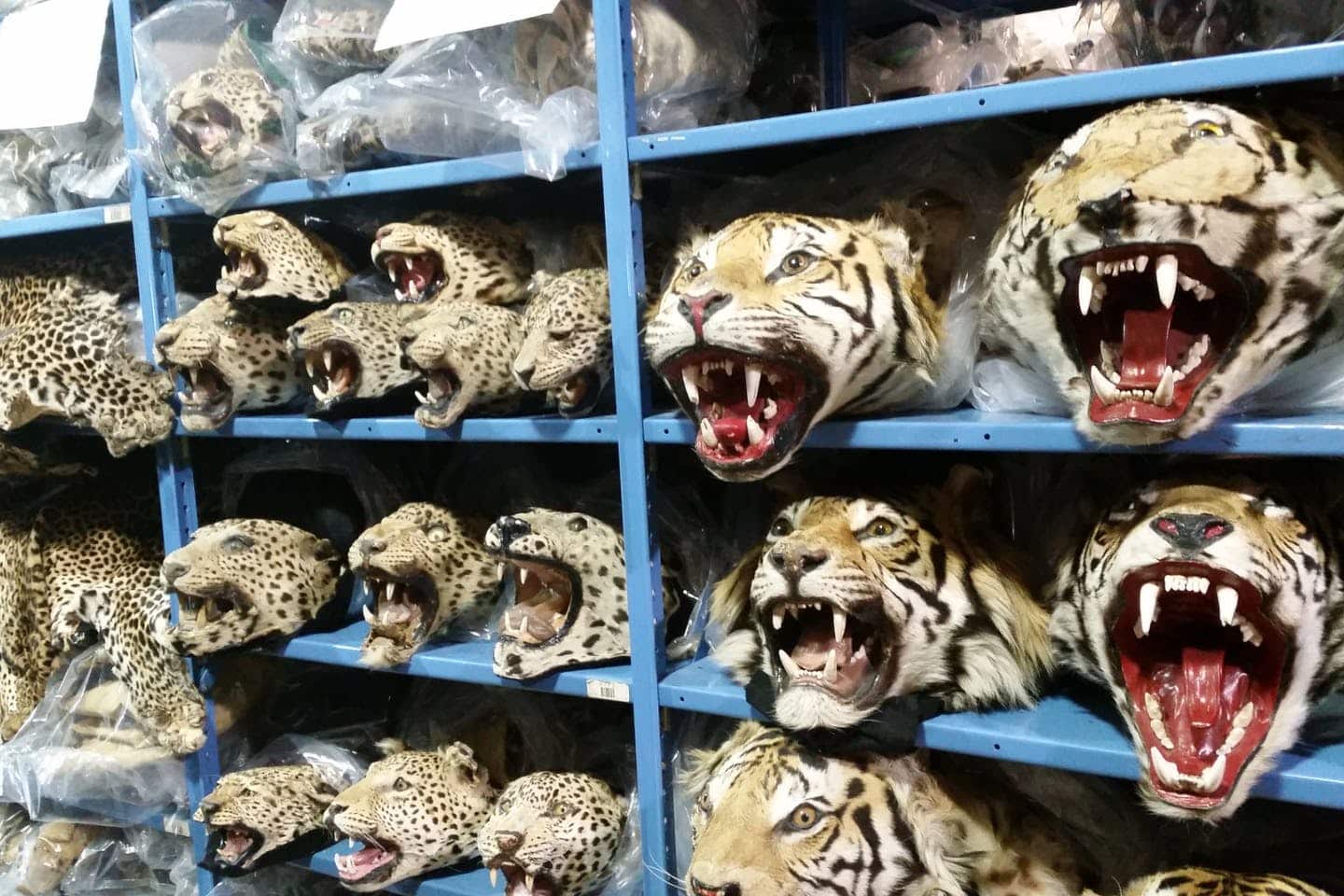 Seized illegal wildlife products. Tiger products are in such high demand that other big cat products are passed off as tiger. Image: Creative Commons.

Tourist guides and information centres in Southeast Asia have been fuelling the illegal wildlife trade by facilitating consumption by tourists, several investigations show.

Since the pandemic, and in many cases before it, traders have been moving their operations online, with more sellers springing up than being shut down.

Without a significant increase in effort from law enforcement agencies and online sales platforms, in-person sales are likely to pick up again once the pandemic recedes.

Illegal wildlife traders will often pay guides and tourist offices a commission to send people their way, says Hong Hoang, founder and executive director of CHANGE, an environmental NGO based in Vietnam.

In 2018, Hong visited Mong Cai in northeastern Vietnam, on the border with China, as part of an undercover investigation with WildAid. Via a hidden camera, the team recorded shops selling ivory to buyers from China and Vietnam.

Vietnam banned trade in ivory in 1992, but selling specimens produced before this date remained legal, allowing some shopkeepers to pass off recently carved ivory as old stock. Meanwhile, much illegal trade continues with impunity.

During Hong’s visit to Mong Cai, many shoppers appeared to be escorted by guides. “It was happening in broad daylight right under the noses of the police,” says Hong. The illegal wildlife trade within the tourism industry has “been there forever and everyone knows about it,” she adds.

Although improved policing means arrests related to wildlife crime are on the rise in Vietnam, the country’s reputation for patchy law enforcement endures.

Mong Cai, for example, is a notorious transit point for moving contraband across the border. After their 2018 trip, CHANGE and WildAid put up billboards and posters in the city, warning that buying, selling or possessing ivory carries a penalty of up to 15 years’ imprisonment.

“[But] it’s not just in the border town of Mong Cai,” says Hong. Wherever tourists flock, the black market in wildlife thrives. “It’s in Halong Bay, it’s in Nha Trang, it’s everywhere [in Vietnam]. We just don’t have a good chunk of money that we can dedicate to conduct a decent survey,” she adds.

Until recently there has been little data on the scale of tourist sector complicity in the illegal wildlife trade in Southeast Asia.

Last year, WWF commissioned a survey on the ivory consumption of 3,000 Chinese travellers abroad. Respondents answered questions about their pre-pandemic trips to seven countries and territories, including Vietnam and Thailand, between August 2019 and January 2020. Of those who reported having visited a shop which sold ivory, 60 per cent said they were referred there via a local guide, while 37 per cent said tourist information centres had sent them there. In total, 6.8 per cent ended up purchasing an ivory product. More than half (57 per cent) of all respondents who visited an ivory retailer said the salesperson spoke Chinese.

Ivory is also popular among Thai and Vietnamese consumers. For some middle-class people with growing disposable income, ivory projects wealth and social status. Spiritual beliefs also play a part in its appeal.

The smaller the item, the more convenient it is for a tourist with a limited baggage allowance to travel with, and the more likely a seller will close a deal. Shipping companies and postal services also play a role by facilitating delivery, with 44 per cent of customers having their purchase sent to them at home in China by mail, the WWF survey found.

“People are smuggling small pieces and customs are basically overlooking it,” said Yoganand Kandasamy, regional lead for wildlife and wildlife crime at WWF Greater Mekong. “In fact, that’s what shops are marketing: when they sell an object to customers they say ‘You know, a small piece and nobody will bother you when you’re crossing the border.’”

He adds: “An individual buying an item weighing no more than 100 grams doesn’t sound like much. The problem is that we have something like 100 million travellers from mainland China coming to the region (Southeast Asia, as well as Hong Kong and Japan), even if it’s just 10 per cent of visitors buying these products, it adds up.”

Many unsuspecting tourists will inevitably be targeted by tour operators and tour guides in Cambodia, Thailand and Vietnam. These people work with black-market traders, who are trained to sniff out potential buyers, not least to try and recover earnings lost to Covid lockdowns.

It is not just ivory that is marketed to tourists. “Items such as marine turtle combs and fans, small and popular as souvenirs … have always [been] primarily targeted [at] tourists,” said Douglas Hendrie, enforcement director at Education for Nature Vietnam (ENV), a non-governmental organisation.

E-commerce and social media help sell illegal wildlife products to tourists in Southeast Asia. Increasingly, tourist-focused businesses across the region are using these platforms to advertise and sell animal parts.

In the Laos capital of Vientiane, for example, illegal wildlife products are on open display in Sanjiang market, but much of the actual selling takes place online.

“They have QR codes you scan to friend them on WeChat. That opens up a whole album of products, which you can buy online through WeChat Pay and they arrange the delivery to your address in China,” says Debbie Banks, tigers and wildlife crime campaign lead for the Environmental Investigation Agency (EIA). EIA have documented ivory bracelets, tiger teeth, tiger bone wine, helmeted hornbill casques (“red ivory”), bear bile pills, and rhino horn trinkets for sale in the market.

Digitally savvy sellers have been able to withstand the in-person sales slump caused by Covid-19 better than most.

For Hendrie, daily successes in suppressing wildlife crime are not keeping up with sales growth. “We are essentially throwing sand at an internet tide of sales,” he says.

Trade in tiger products ‘out of control’

In Vietnam, the sale and advertising of tiger parts and products is prohibited by law, but tiger bone “glue” — a thick paste made by boiling tiger bones with other ingredients — remains stubbornly popular, marketed as a cure for joint problems and a virility booster.

This too is marketed directly to tourists in Southeast Asia. In a report published last year, EIA reproduced adverts from a tour operator and shipping specialist promoting tiger bone glue on its website to Vietnamese visitors to Thailand, making clear the operator could organise delivery for buyers.

Another operator advertised the opportunity to buy tiger bone glue as a reason to visit a “butterfly garden” near Bangkok. In a 2019 investigation, EIA documented how tourists visiting a retail park in Thailand were presented with sales pitches marketing tiger bone glue. Salespersons told coachloads of tourists, mostly from China and Vietnam, that “Going to Thailand without buying tiger bone glue is like you haven’t gone [to Thailand]”. This ignores the CITES (Convention on International Trade in Endangered Species of Flora and Fauna) ban on all international commercial trade in tigers and tiger parts.

According to Banks, appetite for tiger products is increasingly endangering other cat species too: “African lion bone, teeth and claws are being sold as tiger; likewise jaguar teeth and claws.”

Southeast Asia’s special economic zones, such as the Golden Triangle where the borders of Laos, Myanmar and Thailand meet, and which are popular with tourists, remain “key hotspots for the illegal wildlife trade”, according to a survey by NGO TRAFFIC.

Certain restaurants have long been known to cater to tourists in search of exotic wild meat, according to Nguyen Van Thai, founding director of Save Vietnam’s Wildlife and recipient of this year’s Goldman Environmental Prize for his work to protect pangolins. “When people are travelling to remote places, near forests, they want to eat something special from that region, and that often involves bushmeat,” Nguyen told China Dialogue.

Hong agrees. “Bushmeat is a huge issue we are dealing with, with tourists,” she says. “From government officials travelling to [rural] provinces on business, to tourists eating civets, pangolins and porcupines, people don’t understand that they are supporting the illegal wildlife trade by consuming these protected species.”

Even well-meaning travel guides and websites contribute to the problem by writing about animal-infused wines and other “exotic” local delicacies as a “must-try” experience for any seasoned world traveller. In many cases, they make no mention of the steep cost to locally endangered wildlife of such experiences.

Could ongoing public health concerns related to the link between zoonotic diseases and wildlife trade offer a chance to change consumer behaviour? Nguyen isn’t convinced: “People have been concerned about the health issues regarding eating wild meat since Covid, but people were also concerned before. Sars, HIV, avian influenza — it’s all related to wildlife consumption.”

Signs for the future

There were some promising developments last year. Twenty-one Chinese entities signed a pledge with WWF and the Global Sustainable Tourism Council to tackle the interconnected issues of wildlife trafficking, plastic waste and food waste.

Then, in December, 30 representatives from Vietnam’s travel industry committed to supporting responsible tourism, including by protecting wildlife. They had been brought together by People and Nature Reconciliation, a Vietnamese NGO, and Vietnam’s Responsible Travel Club.

Vietnam has also “made great strides in the way it deals with wildlife crime,” says Hendrie. “Younger generations are less inclined to consume wildlife or use wildlife traditional medicine. Ivory is the exception to the rule, however.” At the lower end of the market, the sale of jewellery and carvings is increasing across all age groups, particularly online, he adds. Tiger and bear claws are also popular.

Research from China reveals a slightly different picture on ivory. In April, WWF revealed in its fourth annual ivory survey that Chinese consumer demand was at its lowest level since the ivory ban came into force, with the proportion of the population defined as “diehard buyers” dropping to 8 per cent in 2020 — less than half of the 2017 pre-ban level. Yet demand among those who travel regularly abroad has not waned; individuals who travelled just before the pandemic closed borders purchased ivory in larger quantities than in 2017.

When the chance to travel opens up the evidence suggests there will be ample opportunities, often revealed by tour operators, to buy wildlife illegally once again.