John Hume, owner of the world’s largest private rhino population, has run out of finances to maintain his herd. Mauricedale Nature Estate, just outside of Malalane and only 15 kilometres south of the Kruger National Park, will go under the hammer on Wednesday.

Hume, who allegedly sits on a stockpile of five tonnes of rhino horn from his dehorned rhinos, said it costs millions a year to safeguard and maintain the animals. He now claims bankruptcy. The rhino horn was harvested from his herd over the years during dehorning operations.

Hume confirmed that the sale is an effort to raise funds to save his 1,732 white rhinos and also to secure the future of this near-threatened species for generations to come.

“The buyer of Mauricedale Nature Estate will play a key role in securing the future of the iconic white rhino – a legacy that any nature lover can be proud of,” read a statement issued by Claremart Auction Group on behalf of Hume. 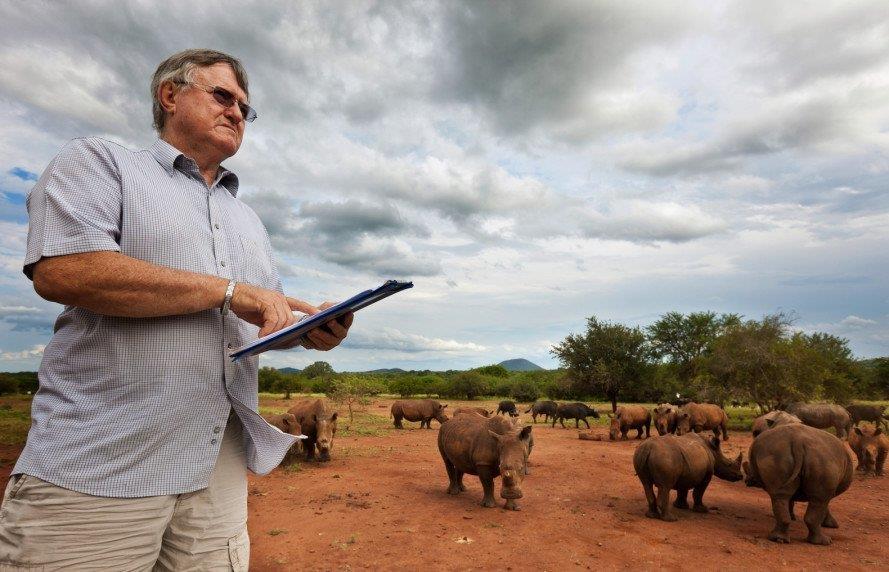 It is no secret that Hume’s rhino project on Buffalo Dream Ranch has been in dire financial straits for some time. This 6,600 hectare estate is Hume’s last remaining asset. Claremont Auction group confirmed that previous attempts to sell the property for R400 million to raise money to support the rhino project were unsuccessful.

Hume allegedly spends approximately R5 million a month in security costs alone to look after his rhinos. This along with paying for feed, veterinary care and staff, has seemingly made it impossible to continue with de facto situation.

Hume has repeatedly said that being able to sell off his stockpile would allow him to pay for the costs of keeping rhinos. He confirmed that his current situation is not sustainable and added that if he doesn’t get money to protect his rhino that they will be dead.

“I am using my life savings and it can’t last.”

Hume is probably best known for challenging the government’s 2009 moratorium on the domestic trade in rhino horn, an extended legal case that he eventually won in 2017. He also appeared in the 2017 documentary, Trophy, in which he shared his views on legalising the trade in rhino horn.

Hume on several occasions stated that he believes a legal trade is the only way to stop the poaching crisis, claiming that the escalating security costs for rhino owners and managers of wild rhino populations are unsustainable.

He said that sourced rhino horn could one day meet demand from Asia, and that better law enforcement is unlikely to end the trade alone.

In August 2017 Hume held an online auction to sell an advertised 264 rhino horns. This was widely publicized and was even translated into Mandarin and Vietnamese.

Although the details of the auction were never made public, Hume stated he was disappointed with the sales. His lawyer, Izak du Toit, issued a statement that read: “The auction yielded fewer sales and fewer bidders than anticipated.” Hume blamed the government and adverse publicity for this.

In January 2019 Hume issued an urgent appeal through the Rhinos of Buffalo Dream Ranch Facebook page for assistance, as his rhino faced starvation due to the drought that has gripped the North West province during that time. Hume said that funds reached ‘Day Zero’ and called the situation “really dire”.

In January 2019 Hume send out a plea for assistance:

My name is John Hume and I own and operate a White Rhino Captive Breeding Operation in the North West Province of South Africa.

It has been no secret since April last year that I have been running out of the vital financial resources necessary to continue operations at Buffalo Dream Ranch. At the time my financial predicament became public knowledge, we only had reserves to carry us through to August of last year. Through the very timeous and fortunate sale of some of our rhinos to Swaziland, we managed to extend our ‘Day 0’, and have kept our rhinos safe, fed and properly protected, until now. However, the North West Province has been suffering a most severe drought, with little to no rain, and this has had a terrible impact on the natural feed available in our camps. This has forced us to buy in supplementary feed way beyond normal volumes to keep our rhinos properly fed and healthy which has exhausted the lifeline received from the Swaziland sale much faster than we anticipated. We have now reached the inevitable Day 0 on our finances and we quite simply have no financial resources left to continue caring for our herd. We have 1 642 Southern White Rhino, of which 300 are currently pregnant and due to birth over the next 16 months. This equates to nearly 10% of the world’s remaining white rhinos. No more money means no more feed deliveries from suppliers, and pressure on salaries for our nearly 100 staff, so vital for the care and protection of our rhinos. The catastrophic impact of this scenario will be slow, but sadly steady starvation of these beautiful African animals, and them all being left at the mercy of poachers. So, this is an urgent appeal for help. We are heartbroken at the situation, and desperate to save our rhinos. I am now 77 years of age and need to start thinking about handing over this vital heritage project to the next generation of great rhino custodians and I am thus totally open to any suggestions or proposals that might offer a solution to our current financial predicament.

These solutions could include a sale of the project in its entirety, sale of a share in this project, rhino ownership schemes, ownership in only the rhino population growth, funding of security only, or even just donations for feed. Whatever the solution, it needs to happen quickly to avoid the inevitable disaster described.