By NewsroomNovember 21, 2019Anti-poaching, Conservation
No Comments

CAPE TOWN: Which is more difficult to save – the rhino or the failing Proteas cricket team? This question at a press conference provided a moment of comic relief during a rather serious conversation about the plight of one of the world’s most endangered species – the rhino. 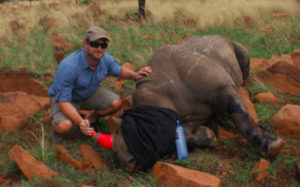 Original photo as published by EWN: Once former cricketer Mark Boucher had recovered and realised he couldn’t play cricket anymore, he devoted his life to another passion – rhino conservation – by founding the Boucher Legacy. (Picture: Boucherlegacy.co.za)

When former Proteas cricketer Mark Boucher’s career ended abruptly in 2012, his life changed in an instant. A national sporting hero had suddenly become a former cricketer; one who could no longer play the game he loved.

A devastating injury from a freak incident on the cricket field left Boucher blind in his left eye. Once he had recovered and realised he couldn’t play cricket anymore, he devoted his life to another passion – rhino conservation, by founding the Boucher Legacy.

For the past few years, Boucher has used his star power to attract big personalities and companies to support the cause that he sees as everyone’s cause.

One of those companies is Cunard Line, which operates the MS Queen Elizabeth cruise ship. Addressing the media on the ship in Cape Town on Tuesday, Boucher and the ship’s captain Inger Klein Thorhauge explain the collaboration with The Boucher Legacy.

“I’m very excited about the relationship, not only because of the funding but having 50 nations on board here we get to get the message across that this is a worldwide problem. I think this is a great opportunity to speak to people and find out why, particularly in Asia, people continue to use rhino horn,” Boucher said.

It’s estimated that three rhinos are killed every day in South Africa. A shocking statistic that may seal the fate of the iconic animal – extinction. But Boucher is determined to prevent this from happening. For years, through his project, he raised awareness and fund to help the fight against rhino poaching and horn trading with tentacles throughout the world.

“It feels hopeless at times, but then I go out into the bush and actually see the animals, and my blood starts to boil again. Once you’ve seen an animal down, you realise you can’t just sit back and do nothing. So, every time I do feel fatigued, I go back to the bush again, I see a live animal, and it gets me going again,” Boucher said. “We can’t sit back and say we’ve done enough.”

Several former sports personalities have supported Boucher’s effort by lending their names and audience reach to get the message across. “My sport has made me a popular person, and now I use that to fight for conservation. Kevin Pietersen has been supportive, and so has Jacques (Kallis). Hard to get Jacques into the bush. He didn’t want to be chased by a kitty cat, that’s what he said to me. But once he spent a bit of time, he started enjoying it. Graeme Smith, Butch James, AB de Villiers and Albie Morkel have all come in when needed and that’s important.”

Boucher is currently coaching the Tshwane Spartans in the Mzansi Super League and balancing the two worlds has been challenging for the former cricketer who played 147 Test matches and 295 one day internationals for the Proteas. “It is quite difficult. Thankfully, cricket only really gets played in the summer, so wintertime is when I try to take off to do a lot of work in the conservation side of things. If it’s your passion, you find the time,” Boucher said.

The Queen Elizabeth cruise ship played host to a fundraising dinner for The Boucher Legacy and will continue to raise awareness of the plight of the rhino poaching among its passengers and at the various destinations it plans to visit like Australia, New Zealand and Japan.

The ship carries over 2,000 passengers and over 900 staff on board, and while cruising has been criticised for having a negative impact on the environment, the ship’s captain said this vessel was doing a lot to minimise the impact by recycling waste, desalinating seawater and ensuring that food waste was minimised with the help of “food digesters”, which is a trial using micro bacteria that ingest food waste and excrete a watery substance.

“We’re proud to say that Queen Elizabeth was named as the best behaving ships in Alaska when it comes to environmental conduct. Because we’re putting a lot already into the marine environment, we’d like to raise funds for something else that we believe is worth supporting. With our connection to South Africa and the wildlife, we believe it’s a very important cause and we’d like to highlight this. This is our chance to influence a lot of people,” said captain Thorhauge.

Shaun McCarthy, MD of Whitestar Cruise and Travel and the agents for Cunard added: “Not only are the fines enormous if ships are in breach of regulations but from a Cunard point of view, it’s the right thing to do.“