By NewsroomDecember 12, 2019Anti-poaching
No Comments

The Chinese penchant for the rhino horn is driving the illegal trade in this prehistoric animal up again. With their newfound wealth, the Chinese are on a spending spree buying the horn coveted for its perceived value, ranging from trinkets to medicine that can supposedly cure anything.

The tragedy is that the rhino is from an ancient lineage dating some 60 million years ago, far longer than that of the elephant. Yet today because of our greed, the rhino is on its last leg. In the past its territory spread across much of Africa for the black rhino and white rhino. It was the same for the three Asian species — Javan, Sumatran and the Greater one-horned rhino.

Lucy Vigne has been studying the illegal trade in rhino horn since the 1980s with the late Dr Esmond Bradley Martin, who pioneered research in the business in the 1970s when he saw smuggled cargo leaving the then far-flung ancient port of Lamu. She continues with the research working towards her PhD. 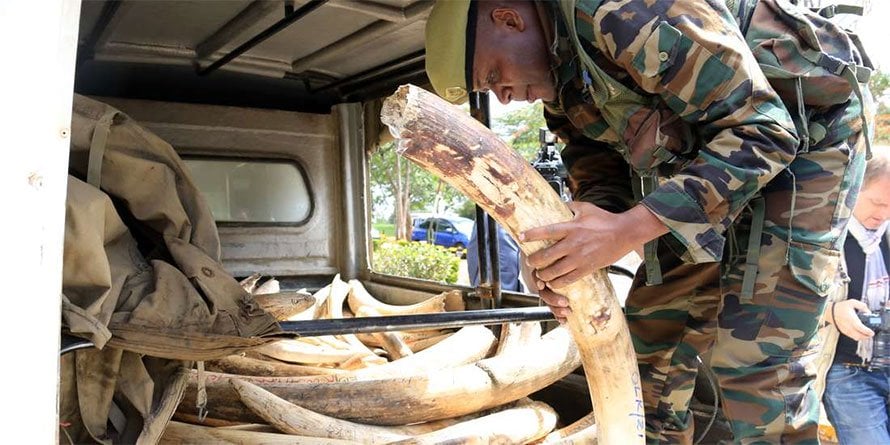 Original photo as published by Business Daily: Kenya Wildlife Service (KWS) officer offloads part of 105 tonnes of ivory and 1.5 tonnes of rhino horns stockpile worth billions of shillings at KWS headquarters in Nairobi on April 15, 16 ahead of a planned destruction on April 30. (FILE PHOTO | NMG )

She points to a map enlarged on a screen showing a few red dots against a sweeping swathe of green that was the range of the rhino historically. The red dots are spots on the globe where the rhino is today.

Vigne was an invited speaker for the Friends of Nairobi National Park monthly meeting held beside the national park that is a stronghold for the indigenous black rhino and the imported white from South Africa. The park is an important breeding sanctuary for this iconic animal.

“It’s history repeating itself,” says the petite rhino woman, referring to the rhino crisis in the 1970s fuelled by the Yemenis’ penchant for the traditional daggers topped with rhino horn handles after the oil boom in Saudi Arabia. Yemenis flocked to Saudi Arabia for jobs returning with dollars to buy the dagger with the rhino horn handle that was once the preserve of the rich. It’s only after the political unrest in Yemen and the economic crash that the trade went down.

“This time it’s the Chinese and Vietnamese,” she says.

Demand for rhino horn in Asia has been growing since the early 2000s, with the economic boom in China and Vietnam. It increased especially in 2008 and peaked between 2012 and 2013. The horn is still in demand, with poaching mainly in in South Africa where most rhinos are today, the majority being the white rhino.

In Kenya rhino poaching is under control because of increased conservation and anti-poaching efforts but East Africa is still a conduit for the continent’s illegal wildlife trade flowing to Asia.

The Chinese population has increased in Kenya, Tanzania, Mozambique and South Africa building the infrastructure. The economies of China, Vietnam and Laos are the fastest growing in the world today, expanding by some six per cent per annum.

During the 1970s crisis, black rhino numbers crashed from an estimated 65,000 in 1970 to about 2,400 by 1995. Kenya’s black rhino population collapsed from 20,000 in 1970 to 400 over this time — a drastic 98 percent drop. A combination of a devastating drought in Tsavo in the 1970s, the civil wars in Sudan, Zaire (today’s DRC) and Uganda, with firearms easily available to the poachers to hunt elephants for their tusks and rhinos for their horns, caused this catastrophe on the continent.

It shocked governments into action, banning the international trade in rhino products by 1977 through CITES (Convention on International Trade in Endangered Species). By the late 1990s, rhino numbers began to increase. “But overall the rhino range had shrunk,” states Vigne, pointing to the red dots.

With the current demand for horn, it’s the southern white rhino which has been hardest hit in South Africa’s vast Kruger National Park with Mozambique on its long eastern border. There have not been enough rangers to protect this huge area from the onslaught of poaching. About 400 patrollers at any one time cover an area of 19,500 square kilometres, which equates to one patroller for 49 square kilometres. “Ideally,” states Vigne, “a large area requires a ranger per 10 square kilometres and double that for small areas.”

Inadequate manpower to protect the mega-herbivore in South Africa is a challenge.

Ironically, the world’s greatest success story in conservation was the revival of the white rhino that was on the brink of extinction in the early 1900s in South Africa. Shot for sport by the great white hunters and for clearance to a couple of hundred, South Africa built her population of the white rhino up to 19,000 by 2012.

Then the poaching suddenly soared to over a 1,000 rhinos killed a year for its horn. In 2015, an estimated 1,215 rhinos were poached in South Africa. And poaching continues with hundreds killed each year.

This all coincides with the disposable income of the Chinese. Between 2012 and 2013, the price of rhino horn on the wholesale market in China and Vietnam peaked at $65,000 per kilogramme. Two years late it had declined by half because of a glut in the market making it affordable for the average Chinese, and prices have continued to fall, making it available to many.

China shares borders with Vietnam, Laos and Myanmar. Vietnam has a long coastline, making it easy for smuggled goods to enter. Goods are then easily sailed along the Mekong River which flows through China, Myanmar, Thailand, Laos, Cambodia and Vietnam.

The price of rhino horn items for retail sale halved to about $53 per gram in Vietnam in 2015. It has made the horn even more available to the Chinese who hop over the border for a shopping spree around Hanoi, the capital of Vietnam, despite rhino horn being illegal in Vietnam and China. In neighbouring Laos the Chinese as in Africa are building infrastructure. With this insurgence, shops in exclusive hotel boutiques selling rhino horn trinkets and ivory items have escalated and are sold to Chinese (or any buyer).

In addition, gilded casinos attract the Chinese holiday makers to gamble, after which the winners usually head to buy the coveted rhino horn trinket in the boutiques.

The criminal trade in rhino horn is big money, controlled by kingpins who are protected by people in high places. Although there are international organisations like CITES to protect trade in endangered species, they prove to be inadequate.

“It’s down to the political will,” states Vigne. An example is Chitwan National Park in Nepal.

“The policy is no trade and there is one ranger per square kilometre to protect the animals with income shared fairly amongst the local communities in the buffer zones who receive 50 percent of the park tourist revenue. They are thus motivated to help protect the rhinos and be the eyes and ears of the Park. This is similar in India”.

It’s something we can emulate – the recovery of a species.