By NewsroomApril 16, 2020Uncategorized
No Comments

A social media account in Vietnam may seem a world away from the UK’s daily death toll from coronavirus. But it shows there is no let-up in the £16billion illegal wildlife trade which caused the pandemic that has killed 100,000 and brought the world to a halt.

The website, run by a Vietnamese trader, offers glue made from tiger bones as a way to stay healthy during the crisis, says London’s Environmental Investigation Agency (EIA). Yet coronavirus is just the latest disease thought to have jumped from wildlife to man, joining the ranks of other killers such as ebola, zika and HIV.

The social media account comes complete with a gruesome video of the trader’s team butchering a tiger and squatting on the blood-soaked floor as they hack off its meat. 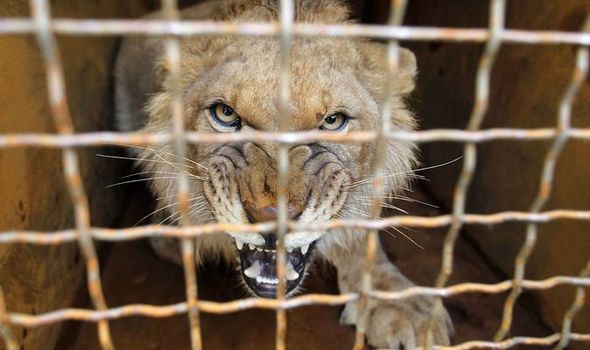 Original image as posted by The Express: Tiger cubs are trafficked from captive breeding facilities in Thailand and Laos (Image: Getty)

He is one of about 100 men in Vietnam who raise tiger cubs trafficked from captive breeding facilities in Thailand and Laos. They let them mature, fatten them up, then slaughter them to order for wealthy buyers from Vietnam and China.

The tiger’s bones are boiled down into a glue like substance with other ingredients, to be taken in tea or wine as a tonic. The trader’s website proclaims: “From the haunting pandemic, we recognise the two most important things in life, family and health.

“Invest in health while you can! Money will not buy health, but with money, health will certainly improve.”

But the EIA says this is far from confined to Vietnam.

In terms of value, the trade in illegal wildlife is up there alongside drugs and arms trading.

China has banned eating wildlife and shut down many “wet markets” where creatures from pangolins to leopards, or their body parts, are sold.

But trade in farmed wildlife like tigers can still go on.

And the ban does not include wildlife ingredients in traditional Chinese medicine.

The EIA says that 24 firms in China list bones of endangered leopards among their medicinal ingredients. And as the Daily Express revealed last month, Beijing is promoting a coronavirus treatment made from bear bile.

The medicine is listed as a treatment for “severe” and “critical” cases in the Covid-19 Diagnosis and Treatment Plan (7th trial version), says the EIA.

Coronavirus is thought to have leapt to humans from a wildlife market in Wuhan city, the pandemic’s original epicentre.

Medical studies suggest the virus originated in wildlife, with bats the likeliest source. But the world’s most heavily trafficked wild animal, the armadillo-like pangolin, has also been linked to the disease.

A study in the journal Nature has said coronaviruses closely related to the pandemic were detected in a small number of pangolins smuggled into China.

China’s press says much of the illegal wildlife trade has gone underground or online following Covid-19 crackdowns. One report says illegal traders are advertising wildlife through videos sent over mobile phones – one was caught trying to sell 13 ornamental pheasants.

Some are using social media to advertise their wares while others turn to websites that appear briefly, before being taken down.

A Chinese newspaper report said: “Since early February this year the online black market is becoming a convenient trading channel for illegal wildlife.

“Online wildlife trafficking is being used by some criminals because of its ‘high profit and low risk’ characteristics and it is becoming more and more rampant.”

As long as the buyer knows the exact location and method – whether it is ivory, polar bear fur, pangolin, rhino horn, or live tiger – you can buy it online.”

Pet shops are also an outlet.

One in Changchun was caught illegally selling eight lizards, a turtle and seven spiders.

Traders are also sending wildlife via express delivery parcel services, as the volume of nationwide shipments means the risk of getting caught is low.

Debbie Banks, who leads the EIA’s tiger and wildlife crime campaign, said: “Fear of the virus or its potential source has not stopped people offering wildlife illegally online. The reason is money.”

Miss Banks believes that the problem stems from our relationship with wildlife. She says destroying nature and its habitats has created “interfaces” between humanity and wildlife.

Some experts say we could potentially contract more than one million diseases from wildlife. Miss Banks says: “This is a chaos of our own making.

“We need to end the commercial wildlife trade where it is harmful to biodiversity and human health.”

Miss Banks’s colleague Chris Hamley said: “Since the start of 2020 and the onset of Covid-19, EIA has recorded a total of 17 tons of pangolin scales seized by law enforcement authorities.

“We are also aware that wildlife traffickers operating in Africa and Asia continue to source pangolin scales, albeit at lower quantities than before the pandemic.”

Other campaigners highlight the risks from farmed wild animals such as bears which are kept in tiny cages and “milked” for their gall bladder bile to produce traditional medicines. Jill Robinson, the British founder of Hong Kong-based Animals Asia, said 12,000 bears were suffering in cruel farms across the Far East.