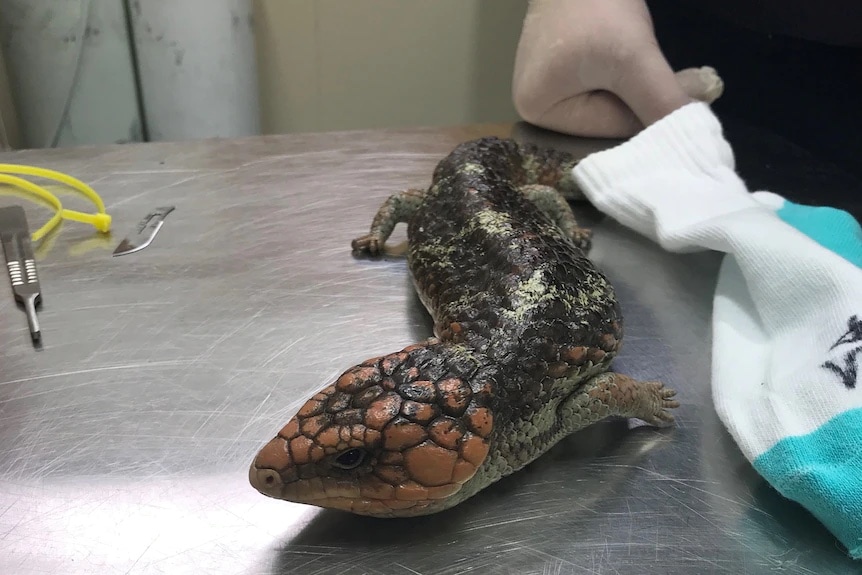 This shingleback lizard was found in a sock by the Australia Border Force. Image: Australian Department for Agriculture, Water and the Environment.

In Victoria, there has been a 59 per cent increase in wildlife crime-related tips to Crime Stoppers in the past year.

CEO Stella Smith says more people are at home, online, and are seeing illegal trafficking and trading of wildlife.

“They’re keen to report it and see something done about it,” she said.

Ms Smith said criminals often targeted native reptiles and parrots, as the animals were worth large amounts of money on the international market as exotic pets.

“Lizards are very popular and they can carry significant prices,” she said.

Many animals that are captured for trade die in the transportation process, Ms Smith says, as they can be placed in boxes, tins and luggage for long periods of time and, in some cases, taped to smugglers’ bodies.

“There is a total disregard for animals dying, so you’ve gotta be a [cruel] person to think this type of crime is okay,” she said.

Ms Smith said there were legitimate reasons for some people to possess and sell native wildlife, but these carers would have licences and be registered.

Some species of animals that are targeted by smugglers are already endangered, Chief Conservation Regulator Kate Gavens says.

“One of the animals of concern for us is the red-tailed black cockatoos. There are only about 1,000 left in the wild,” she told ABC Radio Melbourne.

“Criminals will target nest sites to then sell their eggs into the international market.”

Debbie Saunders, a conservation ecologist at the Australian National University, said the cumulative situation of habitat loss and the wildlife trade could have devastating outcomes for some species.

“We have so much unique wildlife here so it makes us particularly vulnerable,” Dr Saunders said.

“The swift parrot, for example, has gone from endangered to critically endangered now and there’s a whole range of things impacting that but illegal trade is known to be part of that.

“I think it is a bigger problem than we’re aware of, given when things are reported there is usually a much bigger scaled operation that originally thought.”

The effect of smuggling wildlife for the black market has been more devastating overseas in countries such as Vietnam, Ms Saunders said, particularly for animals such as the pangolin.

“The crime is rife across the world.”

Community awareness of the illegal wildlife trade and the accompanying biosecurity threats had increased due to the pandemic, Ms Saunders said.

“The scale of these operations is just mind boggling.”

“There were major changes in illegal trading in China and other countries as well after the pandemic outbreak.”

Ms Smith said the increase in reporting reflected the community’s anger towards the crime.

“The feedback we get from the public is their disgust at those who perpetrate these types of crimes,” she said.

“At the moment if there is a report that illegal activity is occurring, there are very little resources for people to go and do something about it,” she said.

“Not only to go and collect the evidence, but also in order to actually take it through to prosecution, that could be more supported.

“In line with international treaties and things that we’re signed up to, I think it’s really important that we continue to invest in that.”

“There are fines in the tens of thousands of dollars for possessing illegally imported animals or their offspring. You can be subject to up to 10 years’ jail or a fine of up to $210,000,” she said.

A spokesperson for the Department of Agriculture, Water and the Environment said domestically, the department was doing everything it could to detect illegal wildlife trade.

“Our international collaboration and intelligence sharing with Commonwealth and international partners is critical to achieving lasting disruptive effects against wildlife trafficking syndicates operating within Australia and overseas.”

“This is about protecting our wildlife from criminals,” she said.

“Anyone with information can contact us anonymously. All information is kept confidential.

“To help stop native and exotic animals being trafficked in and out of Australia, the Victorian government launched the Break the Chain campaign this week.