By NewsroomNovember 23, 2019Conservation
No Comments

KOTA KINABALU: There is a hiccup in a plan to harvest eggs from terminally-ill Sumatran rhinoceros for in-vitro fertilisation to save the species from extinction.

Sabah Wildlife Department director Augustine Tuuga said although the female rhino, Iman, is still producing eggs, her condition could be deteriorating further due to harvesting process. 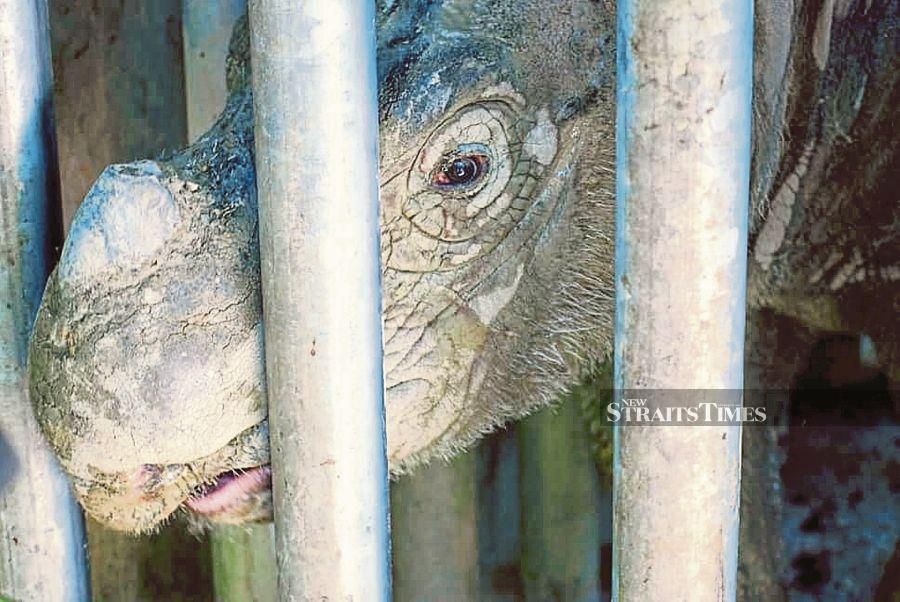 Original photo as published by New Straits Times: The rhino has been having cancer since she was found in March 2014. Although the tumour is not malignant, it has spread to the urinary bladder. (NSTP/file pic)

The rhino has been having cancer since she was found in March 2014. Although the tumour is not malignant, it has spread to the urinary bladder.

No surgery was made to remove it as it is deemed as dangerous with inevitable major blood loss that would result in her quick demise.

Iman is reported to have lost 44kg and under supplements as she is not eating her normal amount of food now.

“Looking at her worsening state, it is difficult for us to harvest the egg as we fear the procedure will inflict more pain on her.

“As of now, her chance to undergo the process is slim. However, we pray that she will get better under current treatment,” he said when contacted.

Augustine added that it would have to wait for next cycle next month, and hormone therapy will be administered for 25-year-old Iman to produce eggs.

He explained that the hormone meant for egg production would have effects on the tumour.

“Therefore, the team has to find balance in the reproductive and cancer treatment,” he said, adding that the last rhino in the country is now being cared for at Tabin Wildlife reserve in Lahad Datu.

Augustine added that a German expert is ready to be called for the egg harvesting process should Iman’s condition shows any improvement.

There was an attempt to fertilise Iman’s egg two months ago in Sandakan but the sperm quality was poor.

The team had used frozen semen from male rhino Tam, who had died due to old age and organs failure in May this year.