By NewsroomAugust 2, 2021Education
No Comments 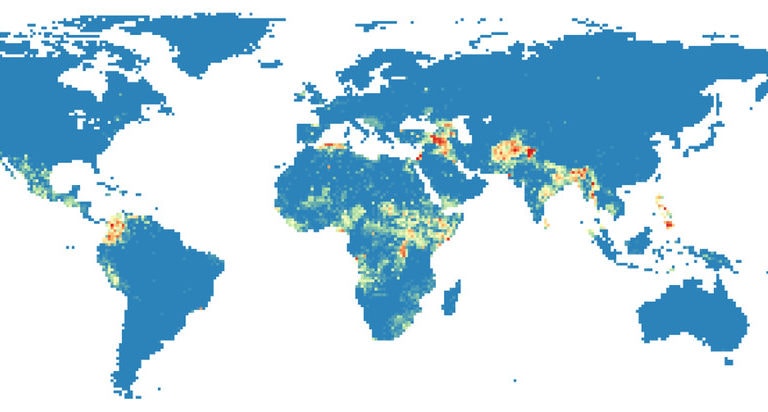 Global patterns of armed conflicts between 1989 and 2018 depicted by the number of years of conflicts. Image: As originally published by Mongabay India

The impacts of armed conflicts on wildlife globally are underestimated, according to recent research which calls for urgent attention to conflict resiliency in conservation plans for a wide suite of species.

About one-fifth of these species showed widespread overlap with conflict, meaning that conflicts extended over at least half of their geographic ranges. For around 225 mammal and 390 bird species (615 species), conflicts were widespread and persisted over 15 years or more.

But global species assessments such as the IUCN Red List recognise only 107 species (87 mammals, 20 birds) as threatened by “war, civil unrest and military exercises” as against the 615 species that the study highlights as exposed to both widespread and frequent conflicts.

“In India and globally, studies highlight that areas that have experienced conflict tend to also have a recurrence of conflicts. So, places like the disputed India-Pakistan border, conflict in Jharkhand and ethnopolitical conflict in western Assam, Manas are all places which are vulnerable in the future as well,” study co-author Abishek Harihar told Mongabay-India.

Conflicts were more widespread and frequent among species classified by the International Union for Conservation of Nature as threatened with extinction, the study found. “Most of the world’s mammals and birds are already threatened by habitat loss, overexploitation and human disturbances, and we show that for conflict-affected species these threats occur more often than for species not affected by conflict, highlighting that conflicts act as threat multipliers,” Harihar explained.

To enhance the recognition of armed conflict as a threat to species, the authors suggest ensuring that future species reassessments (for example under IUCN RedList), explicitly mention “war, civil unrest and military exercises” for the identified species.

“Second, planning for conflict resiliency could encompass several approaches depending on circumstances and focus both within and beyond active conflict zones. For example, captive breeding and reintroduction programs may need to be considered for highly endangered species that experience conflicts throughout their ranges,” added Harihar, affiliated with Nature Conservation Foundation, India and Panthera, New York.

For species whose ranges extend beyond active conflict zones, proactive conservation measures in non-conflict areas could play a role in facilitating post-conflict recovery, he said.

One example is the recurring ethno-political violence that rocked Assam’s Manas National Park (MNP), in the Bhutan-Himalayan foothills, from the late 1980s till 2003 changing the spread and abundance of wildlife, including royal Bengal tigers. But the protected area’s continuity with Bhutan’s Royal Manas National Park (RMNP) helped shelter and preserve the overall animal diversity, according to a 2018 study.

Clashes broke out over “space and identity involving Bodos, local Muslims and other ethnic groups” with the demand for a separate state of Bodoland in 1987.

During this period of recurring violence, the population of Indian rhino (Rhinoceros unicornis) was poached, prompting a reintroduction program to repopulate the park. The park falls under the Bodoland Territorial Administration Districts (BTAD) that was carved out in western Assam following the resolution of the conflict in 2003 with the formation of the Bodoland Territorial Council (BTC), which provides a certain degree of autonomy to the Bodo people in this area.

“In Manas, the long conflict impacted the tranquility in the forest to a great extent but things turned around well with peace as we have a productive transboundary ecosystem with Royal Manas in Bhutan that helped animals to take refuge and with increasing improvement in habitats and law enforcement,” M Firoz Ahmed, a wildlife biologist at Assam-based NGO Aaranyak and co-author of the 2018 paper told Mongabay-India. The park in its latest assessment has recorded an increase in tiger population from 30 last year to 48 this year (2021).

Political ecologist Anwesha Dutta at the Norway-based Chr. Michelsen Institute, who was not associated with the global research, said that proper planning for risk mitigation is crucial for conflict resiliency. Dutta who has extensively researched in the BTAD in Assam told Mongabay-India: “Every time a conflict breaks out people are temporarily resettled by the state inside reserve forests. Army also goes in. No one has mapped the environmental impacts of the human settlements when the Army bases are operating in Assam forests or northeast India. That is a grey area. You need to plan to build infrastructure for resettled people, among other things.”

“Once you put them inside a Reserve Forest, where technically no one is supposed to be, you are exposing them to risks; you are exposing them to different species so you are increasing the risk of human-wildlife interaction, and there is a vulnerability in living in that environment which leads to resource extraction and they also get involved in the timber trade,” she adds.

Direct and indirect impacts of armed conflicts on wildlife

Direct threats are those that arise from the act of war itself, e.g. direct killing of animals and deforestation from explosions, gunfire, etc. Examples include African elephants (Loxodonta africana) being hunted for meat and ivory (potentially to fund terror groups) in Mali and the Democratic Republic of Congo or Eastern gorillas (Gorilla beringei) being killed inadvertently due to landmines in Rwanda.

“Indirect pathways are those that arise from the effects of conflict, e.g. the weakening of protection or state administration, clearing of wildlife habitats to settle displaced people, etc. Often the short term threats such as the killing of individual animals, clearing of habitat occur during the conflict period, however, these can have long-lasting implications on populations and habitats,” Harihar said.

Armed conflicts also trigger wide-ranging socio-economic and institutional changes that underlie indirect and often non-tactical pathways, such as the weakening of regulatory institutions leading to overexploitation of natural resources.

Dutta says that bringing different stakeholders together (communities, NGOs, local government) and building stronger local institutions (such as strengthening the Village Council Development Committee in BTAD) is necessary for conflict resiliency. In some cases, presence of structured conservation systems such as the Ecological Task Force (ETF) of the Indian Army can potentially mitigate adverse effects of the conservation counter insurgency nexus by working with local communities.

In Assam, the Bodo movement for a separate state saw militants operating from within the forest, leading to the departure of the forest department. Rebels and locals exploited the forest through rampant resource extraction. In response, the ETF was constituted in 2007, explains Dutta in her 2020 paper that builds on the more general literature on the blend of militarisation and conservation or ‘green militarisation’ which refers to the use of military and paramilitary actors in conservation.

Drawing from her interviews with ETF officers and local populations in BTAD, Dutta said: “Even with the ETF’s role in conservation actions in BTAD, counter-insurgency prevails over forest protection and despite their efforts to shield themselves from local politics, incidents associated with local politics does influence its operations – for example, being ambushed by militants during conservation activities.”