In conservation parks, money matters if species are to survive: study

By NewsroomFebruary 23, 2021Education
No Comments 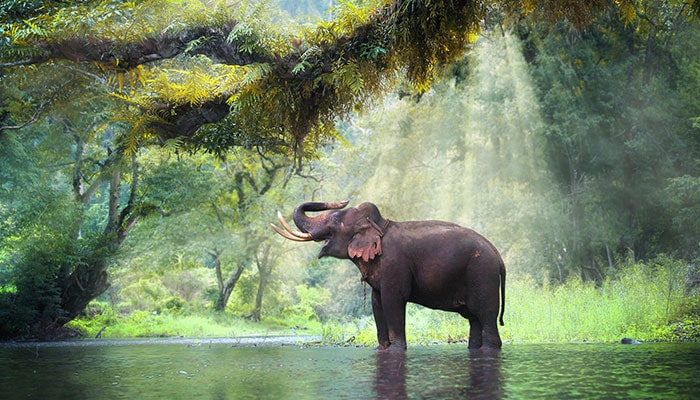 In danger: Elephants are among the big animals at risk of continuing to disappear unless conservation parks are better resourced, research shows. Image: As originally published by The Lighthouse / Macquire University.

Macquarie University conservation scientist Victoria Graham and her colleagues have looked at what factors are linked to successes and failures, to understand how more parks can function successfully. Their findings have just been published in Biological Conservation, and expose the key role of adequate funding and staffing in protecting animals.

“This is urgent work. The area of land set aside to conserve nature over the past 40 years has tripled, but biodiversity continues to decline,” Graham says.

“Our study shows that until funding increases for Southeast Asian parks, rhinos, along with tigers, elephants and orangutans will continue to disappear.”

In 2010, the body of a 20-year-old Javan rhinoceros was found inside Vietnam’s Cat Tien National Park. It was the last of its kind in the country. With little natural habitat left to hide in, it had a very slim chance of survival. It had probably been stalked for months by poachers, who left it with a bullet in its leg and took its horn.

The local extinction of this species was tied to insufficient patrol staff for the area, exacerbated by a poorly regulated market in Vietnam, one of the world’s largest consumers of rhino horn.

Yet nearby in Thailand, tiger populations in Huai Kha Khaeng Wildlife Sanctuary are showing some signs of recovery following intensified patrolling efforts. What separates dysfunctional ‘parks on paper’ from safe havens for threatened species?

To understand what is going wrong (or right), the researchers examined the relationship between management effectiveness and conservation success using the Management Effectiveness Tracking Tool (METT) and trends of 79 populations of mammals and birds in 12 Southeast Asian protected areas from Cambodia, Indonesia, Thailand and Vietnam. They built a predictive model that links population trends to management resourcing.

“Obviously, the problems are multifactorial,” Graham says. “The size and age of the park can influence whether populations have the space and time to recover. Larger animals are more likely to be declining as poachers are more interested in them for their economic and medicinal value.”

But another factor can affect park success. Corruption can undermine law enforcement and lead to doubt about whether conservation spending will have any real, lasting impact, Graham says.

Rhino horns are valued at $66,000 a kilo, creating a strong incentive for government and law enforcement officers to work with poachers. The horns are used in a variety of ways, from cancer treatments to gifts to terminally ill relatives – as an assurance that no attempt to help them was spared. Rhino horn is also used as a hangover cure.

With the financial incentive as yet undiminished, Graham and her colleagues accounted for corruption and other drivers of animal population trends in their model.

They found that despite the negative influence of corruption, there is evidence that providing adequate financial and human resourcing is an important determinant in whether good biodiversity outcomes can be achieved.

“Management resourcing, government transparency and body mass of animals explain 29 per cent of the variation in animal population trends in our model,” Graham says.

“The level of funding for protection is key to park safety. Protection from habitat loss, poaching and other threats, is not guaranteed without adequate investment in their management.”

In the case of the Javan rhinoceros, management staff from Cat Tien National Park had earlier flagged that inadequate capacity and resources were limiting their ability to protect the park’s flagship species.

The example from Vietnam is sadly not isolated. Staff from Bukit Barisan Selatan National Park in Indonesia reported in a 2003 survey that they lacked the human and financial resources to patrol what was intended as a safe haven for the Sumatran rhinoceros. Since then, the species has suffered rapid declines to the point of probable functional extinction.

Studies show that only six per cent of global expenditure in conservation goes to low- and middle-income countries. There is clear and unequivocal evidence that Southeast Asian parks are chronically under-funded.

Graham is explicit, saying: “Our work aims to provide evidence of inadequate funding leading to poor conservation outcomes for parks.

“Our key findings are relevant to international funding agencies, governments and NGOs, to aid decision making around the allocation of limited conservation resources.”

Graham explains that building this evidence is crucial.

“Building a stronger evidence base fosters investor confidence and may ultimately lead to greater financial support for conservation in regions where support is urgently needed. “