By NewsroomOctober 8, 2021Wildlife Crime
No Comments 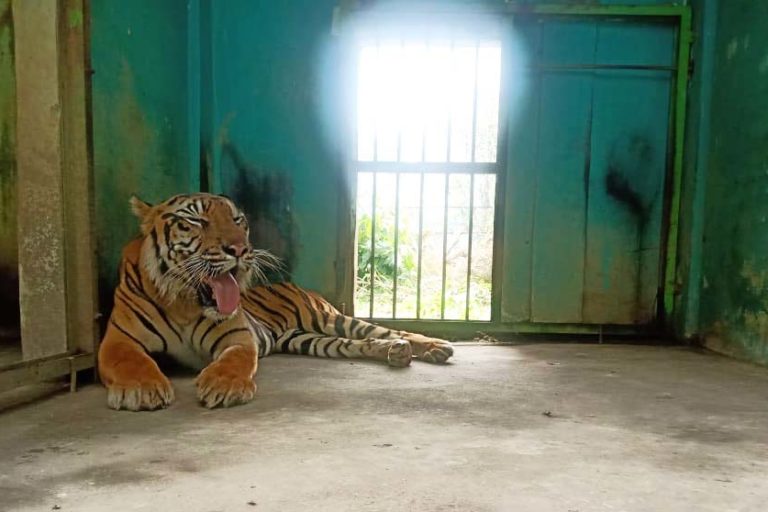 An emaciated-looking Sumatran tiger at Medan Zoo in North Sumatra. Image: As originally published by Mongabay.

Conservation authorities in Indonesia have launched an investigation into alleged animal abuse by a public zoo where Sumatran tigers have been found emaciated and apparently eating grass.

The incident came to light in late September in the form of an online video that quickly went viral. The video showed a Sumatran tiger (Panthera tigris sumatrae), a critically endangered species, at the municipal zoo in Medan, the capital of North Sumatra province. The video showed the animal looking emaciated, with its bones protruding prominently, walking around in its enclosure and seemingly eating grass.

The zoo management said the tiger in the video had been sick for about two weeks and that it was common for tigers to eat grass as a way to discharge fur that they’ve ingested. The provincial conservation department says it has deployed a team to investigate the zoo and will publish its findings soon.

Mongabay Indonesia visited the zoo on Sept. 24 to confirm the reports and find out more about the tiger. There were few visitors at the zoo that day, as COVID-19 restrictions are still in place. Mongabay Indonesia saw three other tigers that appeared to be in a similar physical condition as the tiger in the viral video.

Yona, a veterinarian at the zoo, told Mongabay Indonesia that only the tiger in the video was sick while the others were healthy. She added the tigers were regularly given nutritious food and vitamins.

Wildlife experts, however, have expressed skepticism at the zoo’s explanation, and accuse the it of underfeeding its tigers amid a drop in income as a result of fewer visitors amid pandemic restrictions. Forum Investigator Zoo Indonesia, an NGO, said the city-run zoo had cut the tigers’ daily meat rations in recent months to 2-3 kilograms (4.4-6.6 pounds), from 6 kg (13.2 lb) previously.

Medan Zoo is one of many across Indonesia that has been hit hard by a loss of revenue during the COVID-19 pandemic while still having to cover the costs of feeding and caring for the animals.

The results of a survey published in April 2020 by the Indonesian Zoo Association (PKBSI) showed that only a tenth of zoos nationwide would be able to feed their animals for longer than a month, and only up to four months, in the absence of revenue from visitor fees. There are about 60 zoos throughout Indonesia, holding more than 4,900 animals.

All zoo animals in Indonesia, including those at private zoos, are considered the property of the state. Many are notorious for the egregious conditions in which they keep their animals, failing to meet minimum standards imposed by the government. Negligence, mismanagement and corruption have long plagued the country’s zoos, with animals dying of malnutrition or ill treatment, or sold off into the illegal wildlife trade, prompting calls from conservationists to either shut down or reform the facilities.

Some zoos have launched online donation appeals directly to the public to help buy food for the animals since the start of the pandemic, while others are harvesting vegetation growing in their area to feed their herbivores. Some zoos have sent vegetables and grass to others in need.

Fewer than 600 Sumatran tigers are thought to remain in the wild in Indonesia, with the species considered critically endangered. The big cat’s population has plunged in line with widespread destruction of its forest habitat, primarily due to logging and expanding oil palm and pulpwood plantations. Today, only two populations in Sumatra maintain long-term viability, with more than 30 breeding females each. But both of these tiger communities are under serious threat from planned road projects.