By NewsroomAugust 20, 2021Global conservation
No Comments 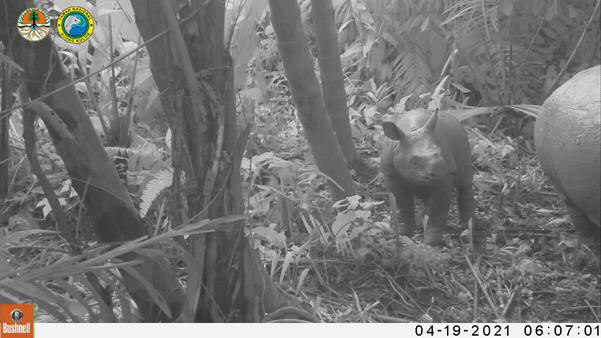 The calves, a male and a female, were spotted on April 12 and June 9, respectively, by camera traps in Ujung Kulon National Park on the western tip of Indonesia’s Java Island, the species’ last holdout on Earth.

The addition of the two Javan rhinos (Rhinoceros sondaicus) brings the species’ total population to 75 individuals. There has been at least one newborn Javan rhino calf recorded every year since 2012, according to the International Rhino Foundation (IRF).

“I’d like to express my gratitude and appreciation toward every stakeholder that has helped with the conservation of Javan rhinos in Ujung Kulon National Park which is also the pride of the world,” Wiratno, the director-general of conservation at the Indonesian environment ministry, said in statement published Aug. 16.

The Javan rhino is one of 25 species targeted by Indonesia as a conservation priority. Poaching and human encroachment into its habitat have hammered the species that once ranged north through mainland Southeast Asia, as far as eastern India. A decade ago, the Javan rhino population was estimated at fewer than 50 individuals. The last of the species outside Java were believed to occur in Vietnam, but was declared extinct there in 2010.

Ujung Kulon is now the last habitat of the species, and the Indonesian government has implemented strict protection and deployed patrol teams known as rhino protection units across the park. Thanks to these measures, there have been no reported poaching attempts in the park in more than 20 years.

Still, the rhinos aren’t necessarily free from peril. Conservationists note that the park is threatened by nature-based disasters that could almost instantaneously wipe out the remaining population; an outbreak of a deadly contagious disease from livestock herds outside the park; and, most recently, the resumed catching of lobster larvae from the wild for aquaculture that has effectively opened up the shores of Ujung Kulon to local fishers.

These threats have led to calls for finding another suitable habitat in which to establish a new Javan rhino population. While these plans have been discussed for years, no alternative site has been chosen, with the Indonesian government instead opting to expand the usable habitat within Ujung Kulon.