By NewsroomFebruary 6, 2020Conservation
No Comments

JAKARTA: The acrimonious end to a partnership between WWF and Indonesia’s environment ministry threatens to derail a crucial program to breed Sumatran rhinos in captivity, widely seen as the only viable way to save the species from extinction, in eastern Borneo.

Conservationists had been scheduled to capture a wild Sumatran rhino (Dicerorhinus sumatrensis) from East Kalimantan, a province in Indonesian Borneo, last November and deliver it to a sanctuary staffed by experts from WWF Indonesia. But that plan was scrapped after the environment ministry effectively cut ties with the conservation NGO in October. The split was formally announced in January this year.

WWF Indonesia had been involved in the capture of two wild rhinos in 2016 and 2018 in the province. The first one, a female named Najaq, died from injuries sustained during her capture. The second rhino, Pahu, also a female, was successfully relocated to the Sumatran Rhino Sanctuary (SRS) in the Kelian protected forest in East Kalimantan. WWF Indonesia staff have been heavily involved in attending to Pahu since her rescue. 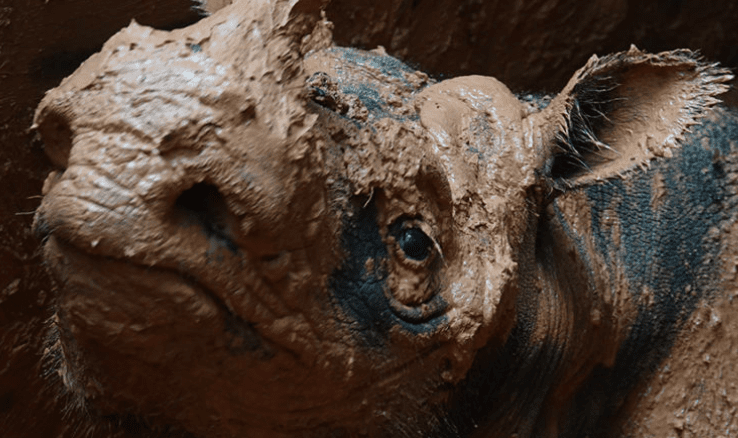 Suhandri, a director at the wildlife group, told Mongabay that WWF Indonesia decided to delay carrying out the plan after receiving letters from the environment ministry on Oct. 7 announcing the ministry’s unilateral termination of their memorandum of understanding.

“We knew the routes [the rhino] would frequently pass,” Suhandri said in Jakarta on Jan. 28. “We had picked the locations for the pit traps.”

The partnership had been scheduled to end in 2023, but the ministry cited alleged violations of the agreement by WWF Indonesia as justification for the early termination.

The ministry’s decision affects 30 out of 130 projects that WWF Indonesia administers across the country, one of them being the rhino conservation program in East Kalimantan.

Conservation groups and government officials agree that bringing isolated, wild rhinos into captivity is critical for ensuring the survival of this critically endangered species. Most of the remaining wild Sumatran rhinos live in fragmented groups too small to reproduce naturally at sustainable rates, leading to fears the species will decline into extinction without human intervention.

Capturing a rhino in Indonesian Borneo is seen as particularly critical to the conservation cause. The Sumatran and Bornean populations of the species have been separated for thousands of years and have grown genetically distinct during that time. Breeding between the two populations will therefore give a much-needed genetic diversity boost to the captive-breeding program, which has so far relied only on rhinos from the Sumatran population.

While Malaysian Borneo no longer has any rhinos in the wild or in captivity, there is at least one, Pahu, on the Indonesian part of the island, and likely a second that WWF Indonesia had targeted for capture last year. (Indonesia’s other SRS, at Way Kambas National Park in Sumatra, has seven rhinos, two of which were born there under the captive-breeding program.)

Suhandri said he couldn’t confirm the sex of the wild rhino targeted for capture, but a male rhino would mean a potential mate for Pahu.

In 2013, WWF Indonesia confirmed a wild population of the Sumatran rhinos in East Kalimantan that was thought to have vanished. Since then, it has worked with the government and other conservation groups — Aliansi Lestari Rimba Terpadu (ALeRT) and Komunitas Pecinta Alam Damai (KOMPAD) — on conserving the species there.

WWF Indonesia has been involved in field surveys to track wild rhinos, beefing up protection of their habitats, setting up the high-security sanctuary at Kelian for the captive-breeding program, and locating and capturing rhinos from the wild. Suhandri said WWF Indonesia had spent more than $1 million on the collaborative rhino conservation program in East Kalimantan.

Indra Eksploitasia, the director of biodiversity conservation director at the environment ministry, told Mongabay that her office would take over the program.

Sunandar Trigunajasa Nurochmadi, the head of the East Kalimantan government’s conservation agency, declined to comment to Mongabay on WWF Indonesia’s exit from the rhino program. However, he said his office was committed to finding rhinos in the wild there and trapping them for the breeding program. He added that they had spotted three wild rhinos in the province.

Suhandri said his team would meet with the provincial conservation agency and other groups to find ways in which WWF Indonesia’s rhino experts could continue to be involved in the program.

“To this day our keepers and vets are still taking care of Pahu. This is such a specific task, you can’t just swap it out,” he said.

News of the end of the partnership between WWF Indonesia and the environment ministry came as a surprise to other conservation groups, according to Kuntoro Mangkusubroto, the head of WWF Indonesia’s steering committee.

“Everyone was asking us ‘What’s going on?’” Kuntoro said. “We’re shattered because we are a reputable organization.”

“WWF-Indonesia has played a critical role in supporting on-the-ground work to save the Sumatran rhino,” Jon Paul Rodriguez, chair of the IUCN Species Survival Commission, wrote in an email to Mongabay.

Rodriguez said the Sumatran Rhino Rescue program would continue to support efforts to save the species and allocate resources accordingly in light of the new development. He said some of the initiative’s key objectives this year include conducting search-and-rescue operations to capture isolated rhinos from the wild, building new facilities to bolster capacity to care for and breed rhinos, and coordinating with other partners across Indonesia to collaborate on a single, countrywide breeding program.

“We defer to the Government of Indonesia and WWF-Indonesia to determine the next steps for their relationship,” Rodriguez added.

Following the death of Malaysia’s last Sumatran rhino last November, Indonesia is now the last refuge for the global population of the species. There are fewer than 80 individuals believed to be left in Sumatra and Indonesian Borneo. Habitat loss and poaching had depleted the population that once roamed as far as mainland Southeast Asia, but experts now say the low birthrate is the main threat to the species. Breeding efforts in captivity have been hailed as the priority for ensuring the rhinos’ survival.

Lukas Adhyakso, WWF Indonesia’s acting CEO, said that while the organization respects the ministry’s decision to cut ties, the focus of all parties should be on ensuring the continued protection and care of the rhinos, whether inside or outside the sanctuary in East Kalimantan.

“We must not let this animal perish,” he said. “We have the expertise. Others may have it, too, but we’re the ones that have been involved [in the rhino program] for so long.

“If the government wants us, we’re ready to support them,” Lukas added.