EAST LAMPUNG, INDONESIA: The government of the Indonesian province of Aceh, notorious for public canings carried out under sharia law, plans to put that same strict Islamic jurisprudence to work protecting what’s thought to be the last viable population of wild Sumatran rhinos on Earth.

Authorities have submitted to the provincial legislature a draft Islamic bylaw, known as a Qanun Jinayat, that prescribes penalties — in addition to those provided for in national law — for anyone convicted of hunting, killing or trading in protected species, including the critically endangered Sumatran rhino (Dicerorhinus sumatrensis). According to Aceh government officials, the qanun also carries penalties for anyone convicted of damage wildlife habitats in the province. 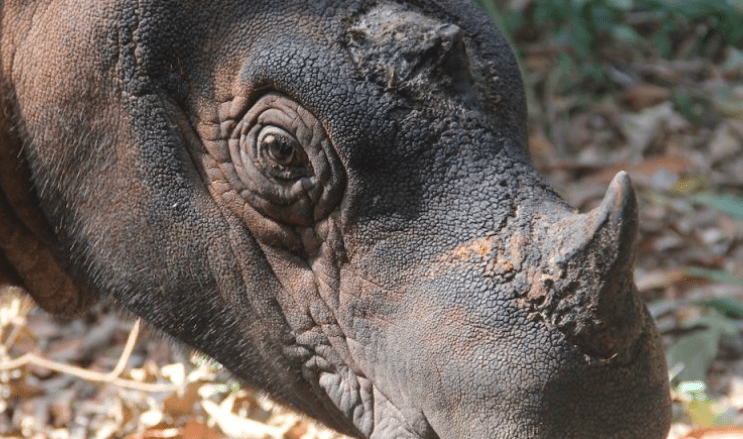 Violators would face not just jail terms of up to five years and fines of up to Rp 100 million ($7,300), as prescribed under national laws, but also up to 100 lashes of the cane if the qanun is implemented.

The draft bylaw is expected to boost protections for rhinos in Aceh’s Leuser Ecosystem, one of the last great intact swaths of tropical rainforest left in Sumatra, and home to the largest population of the near-extinct Sumatran rhinos. It’s also the last place on Earth where critically endangered rhinos, tigers, orangutans and elephants still co-exist.

Conservationists estimate the total population of Sumatran rhinos at between 30 and 80. At least 12 individual rhinos have been identified in the Leuser Ecosystem through recent camera-trap surveys, and official estimates put the area’s total rhino population as high as 50, split up into six subpopulations.

However, the mountainous region has a chronic wildlife poaching problem and remains poorly surveyed by conservationists.

“We’re also having deliberations on another draft qanun that will become a guide for environmental management based on the ecosystem’s carrying capacity for the next 30 years,” Malik Mahmud Al-Haytar, Aceh’s customary leader, told Mongabay Indonesia in a recent interview.

Aceh authorities also plan to establish six zones outside protected forests that will serve as sanctuaries for protected species. “The main purpose is to reduce conflicts between wildlife and humans,” said Muhammad Daud, the head of conservation at Aceh’s environmental department.

The bylaws are being considered just as Aceh prepares to host the national government’s third Sumatran Rhino Sanctuary, aimed at the captive breeding of wild-caught rhinos.

An environment ministry official said the new facility, in East Aceh district, will span about 100 hectares (250 acres), the same size as the country’s first SRS at Way Kambas National Park in southern Sumatra when it opened in 1996. That facility, which was greatly expanded last year, is home to seven rhinos, two of which were conceived and born there; a second SRS, in Indonesian Borneo, is home to a solitary wild-caught female rhino.

Conservationists plan to similarly capture wild rhinos from small population pockets in Aceh and relocate them to the semi-wild habitat of the planned new SRS inside the Leuser landscape. The main threat to the species is the fragmentation of the wild population, which means less opportunity for individual rhinos to encounter each other and mate. That’s led to the natural birth rate dropping well below the replacement level to sustain the species. With the network of SRS facilities, conservationists hope to address this problem through captive breeding.

Dedi Yansyah, coordinator for wildlife protection at the NGO Leuser Conservation Forum (FKL), said each of the small subpopulations in Aceh — comprising five 5 to 10 individuals — was isolated. “In some of the subpopulations in Leuser, there’s been no indication of a rhino calf,” he said.

“Besides protecting them, rescuing the individuals in these small pockets must be done to prevent the species from going extinct,” he said.

Aceh, a semi-autonomous province in Indonesia that’s the only one allowed to implement sharia law in the otherwise secular republic, has drawn criticism for its qanuns regulating private conduct. Hundreds of people have been caned in public for victimless crimes such as gambling and intermingling with a non-related member of the opposite sex. In 2017, authorities for the first time caned two men convicted of having same-sex relations. Homosexuality is not illegal under Indonesian law, but Aceh’s special autonomy allows it to implement qanuns that may conflict with national laws.