Into the wild : The contrasting stories of Africa’s wildlife

By NewsroomJanuary 28, 2020Anti-poaching, Conservation
No Comments

CAMPFIRE drinks in the fading light of dusk, after a long, full day in the African bush is the order of the night, followed by animated chatter about the day’s activities and diverse wildlife sightings, about conservation and the state of the world.

Later, a superb three-course meal in the dining tent, including a perfectly grilled game fillet takes centre stage. This is the good life. The wild life.

This is not a scene from a luxury tourist camp in a national park, or some pristine last wilderness. This is the setting at the small and stylish Ondjou Safaris hunting camp in Dzoti Conservancy.

The international media is filled with news of rapidly declining wildlife populations. Calls to save the last elephants, rhinos and lions are more urgent than ever. Yet the story of ‘the last’ should not be applied everywhere, as the country is not part of this story.

Namibia has a different tale to tell. Through pragmatic conservation approaches, wildlife in this country has recovered from historic lows over the past five decades.

Notwithstanding fluctuations caused by droughts, most of the country’s game populations are healthier today than at any time over the past 150 years. This is not a wild claim. It is a fact illustrated by a wealth of scientific data. Elephant numbers have tripled since the mid-nineties.

Namibia has one of the healthiest black rhino populations on earth. After local extinction over a century ago, the white rhino was reintroduced and occurs again in many places and in good numbers. The famous ‘desert lions’ of the north-west are not ‘the last’, but have increased from about two dozen in 1995 to well over a 100 today.

Yet, internationally, Namibia’s conservation approaches are controversial – because they include the persona non grata of environmental activism – the hunter. 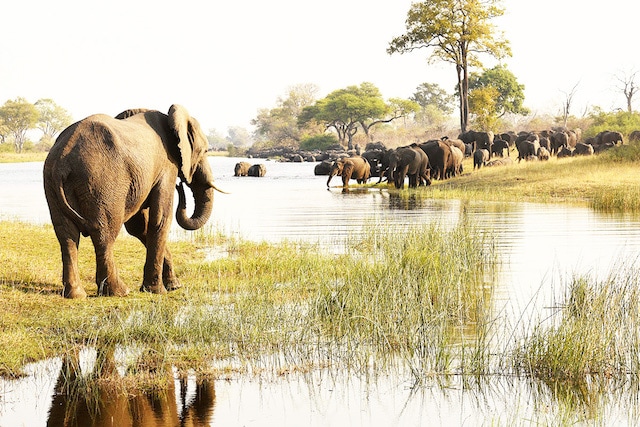 Original photo as published by The Namibian: Over half of Namibia’s elephant population of around 22 000 animals occurs in the extreme north-east of the country – an important tourist attraction, but also a significant burden for subsistence farmers. (Photo: Helge Denker)

Dzoti Conservancy (registered in 2009) is a little-known communal conservancy in the Zambezi region. In an area of 287 square kilometres, just over 2 000 residents live on a mix of traditional livelihoods – and a vital boost provided by diverse returns from legal hunting and wildlife harvesting.

In Namibia, hunting of free-roaming, indigenous wildlife in an open system, which generates direct income for conservation activities and rural communities, is called conservation hunting. It is clearly different from trophy shooting, which is usually carried out in fenced areas where introduced species offer easy targets – and the trophy is everything. For conservation hunting, a passion for intact wildlands is everything – wildlands that are maintained through hunting inputs.

Just as the diverging status of wildlife in differently managed countries is often overlooked, the differences between trophy shooting and conservation hunting are not widely appreciated – all hunters are the bad boys, no matter what. Yet, in Namibia’s communal hunting concessions, conservation hunters are the good bad boys – for local communities and for the health of wildlife.

Importantly, the community decides how to use the land and its resources; whether to form a conservancy, and whether to create a hunting concession. Most communities welcome conservation hunting because it generates significant returns – and because hunting, and meat to eat, are a traditional part of rural lives.

Hunting revenue is the only significant income for Dzoti Conservancy. Without hunting, this conservation structure would not exist here.

Without hunting, there would be no conservancy, that is, no game guards, no patrols, no human-wildlife conflict mitigation, no anti-poaching efforts, no core wildlife area – and certainly a lot less wildlife.

THE HUNTER VS THE POACHER

A couple of months ago at Dzoti, one poacher had been arrested, while another had managed to flee with a rhino horn and elephant tusk. Both the rhino and elephant appear to have been killed in neighbouring Botswana.

For Dzoti, this is the most high-profile wildlife crime case this year because it involved Africa’s primary poaching targets. For Ondjou Safaris co-owner Hentie van Heerden, it was just one of more than a dozen cases over the past decade in which he has provided active support to conservancy game guards and the police, usually with a positive outcome – arresting poachers.

Human-wildlife conflicts had increased. The communities most affected by the ban wanted to have it lifted. An international outcry ensued – with a sad disregard for local realities and the autonomy of democratic African governance.

Namibia has allowed a limited number of elephant hunts each year for several decades, based on a system of population counts and quotas. During this time, the country’s elephant numbers have increased from 7 500 to over 22 000 – and the great pachyderms have expanded their range.

At Dzoti, the elephant quota of Ondjou Safaris has varied between four and five elephants each year. Over the past decade, 35 trophy elephants have been hunted in the conservancy. The average ivory weight has remained consistent, and the heaviest tusk of the last 10 years (65 pounds) was obtained in 2019.

THE PASSION OF THE HUNTER

Late into the evening, with the sounds of the African bush drifting into the dining tent, I sit talking with Hentie and his wife, Denise. Their passion for wildlife and wildlands is manifest. Mention the elusive sitatunga, or ask about the enigmatic serval – and watch Hentie’s eyes light up. Not because he wants to hunt them, but because he has a genuine connection to the wild and all its creatures.

Hunters may decorate their homes with the skulls and skins of their quarry, but these simply serve as tangible, authentic reminders of memorable times spent in wildlands.

Hunters love the dynamics of wildlands, where buffalo and elephant and bushbuck have space to roam, where secretive species like sitatunga can thrive … and where, for brief periods, the hunter can return to the rhythms of nature.

When Dzoti Conservancy was formed, wildlife was scarce and skittish. A decade later, a wondrous transformation has taken place. Warthog and impala are once again common in the area. Bushbuck and waterbuck are thriving. Sitatunga are regularly encountered.

Lion, leopard and serval all hunt here. Buffalo and elephant come and go in large herds. Even giraffe – which had become locally extinct in the Zambezi region in the early 1990s – are back. A series of reintroductions into Mudumu National Park and adjoining conservancies have allowed them to recolonise Dzoti.

The transformation is much bigger than Dzoti, it’s a national recovery – one that is particularly impressive in the Zambezi region. Tourists are enjoying great wildlife sightings in the region’s national parks. But the parks are small, and could not survive as islands within a sea of agriculture.

*Helge Denker is a Namibian writer-naturalist. He has worked in various sectors within the Namibian tourism and environmental spheres for the past three decades, and has published numerous articles on the country’s conservation issues.