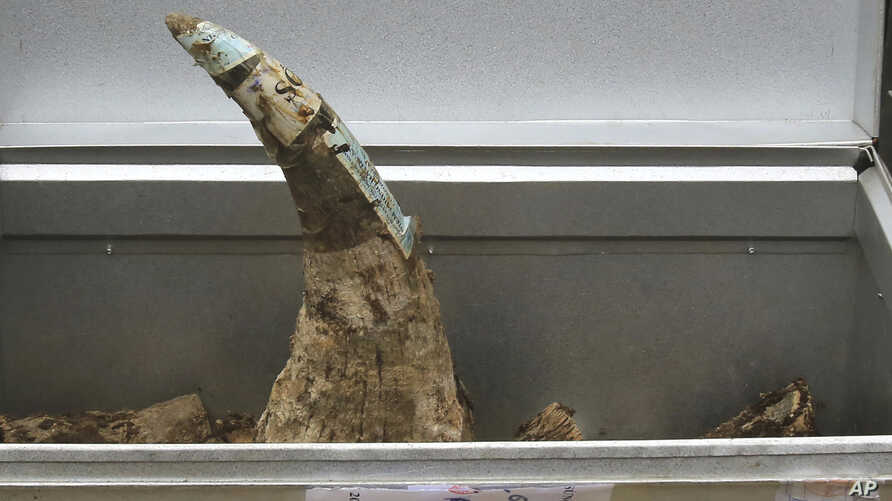 A confiscated rhino horn is placed in a container before being destroyed. Image: As originally published by VOA News.

Four alleged members of an Irish crime gang and five other defendants went on trial Monday in France accused of trafficking rhino horn and ivory to markets in east Asia. French prosecutors started a probe in 2015 after police discovered several elephant tusks and 32,800 euros ($38,900) in cash in a BMW during a random roadway traffic inspection.

Prosecutors say the occupants of the car, who claimed they were antique dealers, were members of the Rathkeale Rovers, an Irish crime gang with roots in the Irish Traveller community.

The nine defendants on trial in the town of Rennes, which include alleged traders of Chinese and Vietnamese origin, face up to 10 years in jail and heavy fines, although two of those charged are on the run.

Nithart, who was in court as an observer, said that the case files and the first day of hearings underlined how Europe, and European auction houses, played a role in supplying east Asia with horns and tusks.

“What you can see in the intercepted telephone records is that the supply comes from lots of different towns in France and around Europe. The networks are well structured,” she added.

Many of the objects are old ornaments and antiques, but the seizures by police of several tusks that are less than 20 years old suggest that recently poached animal parts are also being traded.

As part of their investigation, French police also found that tusks and rhino horns were being turned into powder, flakes, and other objects on French soil before being exported to Vietnam and China.

Vietnamese defendant David Ta, a 51-year-old owner of an export company in the Paris region, denied illegally trafficking protected animals, despite the discovery of 14 tusks on a pallet at his home.

Four suspected members of the Rathkeale Rovers — Tom Greene, Richard O’Riley, Edward Gammel, and Daniel MacCarthy — are accused of supplying horns and tusks to exporters in France with links to China and Vietnam.

An exceptionally large horn weighing nearly 15 kilos seized from the gang during the investigation would have earned around $15 million once processed at Asian market prices at the time, according to the Robin des Bois group.

The organized crime group from the Limerick region of western Ireland “have many activities, but what is of interest to us is their speciality in trading rhino horns,” Nithart said.

They have been linked to thefts from museums and private collections.

There were suspicions they had been involved in the shocking 2017 killing of a white rhino in Thoiry zoo outside Paris. The animal’s horn was hacked off in a grisly overnight raid.

The Rathkeale Rovers were the target of a joint investigation by European police in 2010 that led to 31 people being arrested, including for the theft of rhino horns, according to the Europol police agency’s website.

Two members were arrested in the United States in 2010 after paying undercover investigators in Colorado about $17,000 for four black rhino horns.