An Irish man has pleaded guilty and been sentenced to more than a year in prison for smuggling a libation cup made from the horn of a protected rhinoceros out of the U.S.

Richard Sheridan, 50, an Irish national from Cambridge, U.K., was extradited to the U.S. in August to face charges for his role in the trafficking, the Justice Department said.

After Sheridan entered a guilty plea on Tuesday, U.S. District Judge Jose EE. Martinez sentenced him to 14 months in prison and two years of supervised release.

He was arraigned in federal court in Miami on August 29 on a May 15, 2014, indictment that charged Sheridan—as well as Michael Hegarty, another Irish national—with conspiracy to traffic in a libation cup made from the horn of a protected rhinoceros. The indictment also charged Sheridan with smuggling the libation cup out of the U.S.

Sheridan and Hegarty bought a rhinoceros horn libation cup from an auction house in Rockingham, North Carolina, and smuggled it out of the country, according to the indictment and a Joint Factual Statement signed by them both in 2012.

The libation cup made from a protected rhinoceros horn. 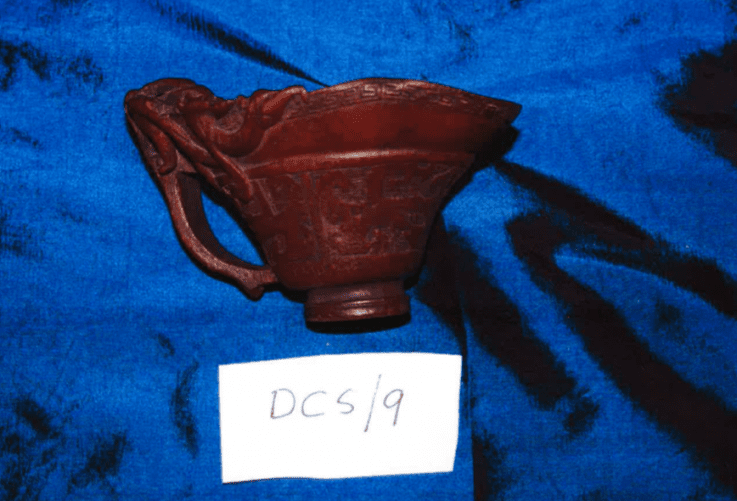 Original photo as published by Newsweek: The libation cup made from a protected rhinoceros horn. JUSTICE DEPARTMENT

Hegarty was extradited to the U.S. from Belgium and pleaded guilty to conspiring with Sheridan to traffic in the libation cup. He was sentenced in federal court in Miami to 18 months in prison to be followed by three years of supervised release.

“Sheridan conspired to profit from the demise of one of the world’s most endangered species,” said Assistant Attorney General Jeffrey Bossert Clark of the Justice Department’s Environment and Natural Resources Division.

“We will continue to work with our international partners to fight the trade in protected and endangered species, and organized criminal enterprises associated with it.”

U.S. Attorney Ariana Fajardo Orshan, of the Southern District of Florida, added: “For our critically endangered wildlife, every case that serves to deter their illegal poaching and trafficking in their artifacts is important to the global effort to preserve these iconic specimens for our children and the generations to come.

“Only through the continued, collective efforts of the international community will the goal of preserving species under threat of extinction be realized.

“The U.S. Attorney’s Office for the Southern District of Florida commends the agencies and investigators on both sides of the Atlantic who worked together to make this result a reality.”

Edward Grace, Assistant Director of the U.S. Fish and Wildlife Service, Office of Law Enforcement, added: “Combating transnational organized crime that involves the trafficking of some of the world’s most endangered species continues to be of the highest priority.

“This investigation is one more example of the accomplishments that can be achieved when investigators around the globe share information and collectively pursue those who attempt to profit from the illegal trade of wildlife.

“It was that type of cooperation between Service special agents and London Metropolitan Police that resulted in today’s sentencing.”