It’s a jungle out there: SA wildlife pet trade industry is a ‘total free-for-all’

By NewsroomOctober 12, 2021Wildlife Trade
No Comments 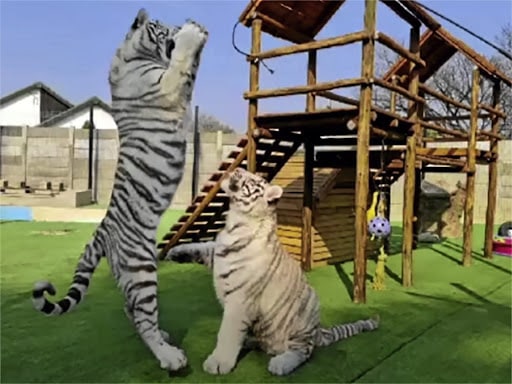 An image of the two white tigers shared by their owner on her social media pages. Image: As originally published by Sunday Times Daily.

SA’s online wildlife trade is a booming business, with hundreds of animals bought and sold each month. The trade is, however, drawing flak from environmentalists, who say it is a “total free-for-all”.

Images and a video of tigers peering over the wall of a crèche in Boksburg on the East Rand last month have thrown the spotlight on the trade of wildlife in SA.

Wendy Brodie of the Gauteng Friends of Free Wildlife, which rescues indigenous wildlife, said what was happening in SA in terms of the trade of wild animals was shocking.

“It is a total free-for-all. You can buy whatever you like online. No wild animal seems to be off limits. You just need to know where to look,” she said.

She said that they were increasingly receiving stranger and stranger animal rescue calls.

“Recently we rescued an aardwolf pup. Someone hunted a pregnant aardwolf, sliced it open and took out the babies for pets. They were kept on the West Rand by a housewife, who tried to hand rear them.

“We have just helped rescue two black-backed jackals, which were pets, and a crocodile which was kept in a bathtub in Johannesburg,” said Brodie.

She said laws governing what wildlife could be kept as pets were controversial.

“It’s controversial because it’s bad for wildlife and the environment. Lots of exotic animals are released into the wild when people get tired of them or they get too big. The wildlife pet trade is driven by ego.”

She said they averaged about 5,000 rescues annually, which included both wildlife pets and animals that had been orphaned.

“Wildlife pets are obtained by people from captive breeders and hunters.”

Marco Claassens, owner of Wildlife4sale.co.za, which is SA’s largest wildlife trading portal, said in the “off season” they averaged about five adverts a day and 50 a month.

“Currently we have 380 active ads on our site. These include ads for the sale of wildlife and the services of game capturers and breeders.

“In the high season, which is during the hunting season, we get far more adverts. Sometimes we average well over 2,500 a month.

“Those who use our service are mainly breeders, who are mostly involved in the export of wildlife. That’s where the big money lies.”

Claassens said they were just a portal and conduit for people to advertise.

“We are like a Gumtree, except just for wildlife. As with Gumtree it’s up to the buyers and sellers to check that they have permits in place so that the sales are legal.

“We cannot be held liable if people do not have permits as our service is a public platform and not classified or locked.”

When asked about his advert on Wildlife4Sale, Sean, who had advertised that he was from Centurion and was looking to buy a three-month-old tiger cub, said he had posted the advert as a joke.

“I thought I had deleted it. I definitely tried to just after I put it up. I am surprised it is still up.”

Asked why he placed the ad, he said he became curious “by watching stuff on TV. It was stupid I guess. I am definitely not still looking for tigers. It’s too crazy man. These are live animals. I would rather go for a snake.”

He said he had never collected wildlife before.

“The East Rand is particularly abnormal. There are lots of carnivores being kept there as pets.

“In other parts of the country lots of primates and tortoises are kept as pets.”

He said the laws were divisive on what could and could not be kept.

“In terms of permits, if you are bringing the exotic species across some provincial borders like Gauteng you need import permits, but if you are buying them within the province, you do not.

“It is a bit like going to the shop and buying groceries. There are often no limitations on what you can buy in terms of exotic wildlife.

“The little creatures are suffering far more than big predators. That’s because they are so easy to move.”

He said there needed to be uniformity with legislation around keeping wildlife as pets in SA.

“There needs to be more enforcement officials, effective policing of existing laws and the strengthening of bylaws.”

He said this week they would meet Ekurhuleni metro officials and Gauteng department of agriculture and rural development.

“We are meeting because the towns of Springs, Boksburg and Brakpan are where we are having most of our problems with wildlife being kept as pets.