Ivory and rhino horn sale ban could be undermined by exemptions for antiques, conservationist warns (Australia)

By NewsroomSeptember 19, 2019Law & legislation
No Comments

After the Federal Government last month announced plans to outlaw such products in a bid to promote animal welfare, attention has turned to what exceptions might be allowed for antiques and artworks.

Internationally, the sale of ivory and rhino horn has been illegal for decades — but sales continue within countries.

State and territory environment ministers will discuss how to impose the ban at their next meeting in November, including how governments could continue to allow the sale of items considered genuine antiques.

But International Fund for Animal Welfare chief executive Azzedine Downes, who was in Australia last week to lobby for an outright ban, said resources for policing any ban would be spread even thinner by exemptions.

“When you talk to law enforcement, they say ‘listen, we have so many problems to deal with, whether its drugs or human trafficking — how can we devote resources to ensure that ivory is in fact an antique’,” Mr Downes said.

“The rule, if you will, in some countries is that ivory can still be traded if it comes from an elephant prior to 1920. How are you going to know that?

“Only 8 per cent of the products being sold had a certificate of provenance. So you don’t really know how that ivory entered Australia, who brought it there, who paid for it.” 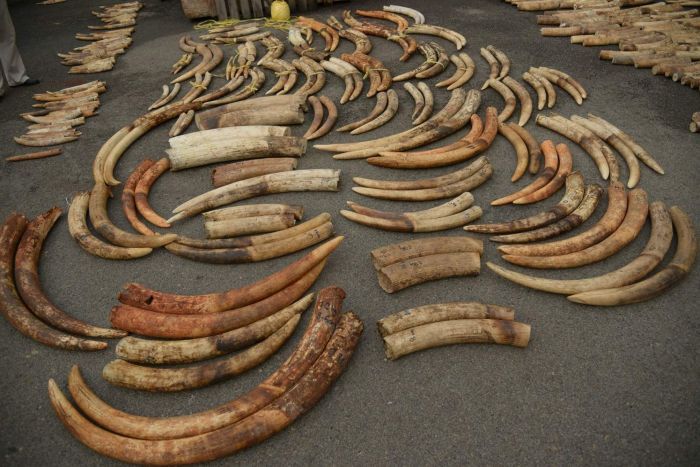 Original photo as published by www.abc.net.au: There are concerns any exemptions would make a ban harder to enforce. (Supplied: Art Wolfe)

Environment Minister Sussan Ley suggested it was appropriate to consider some carveouts to the ban, and argued the matter did not need to be dealt with through “the heavy hand of regulation”.

“It was a different world, the world has changed.”

The Minister would not commit to a timeframe for the ban to be put in place, but said all of Australian jurisdictions would be on board with the basic principles of the changes. “I don’t like to corral my state colleagues before I’ve sat down and talked this through with them,” she said. “But we will talk it through, and they will tell me what’s feasible.

“While the volume of trade in Australia will be small compared to the UK, compared to China, compared to others who have signed on to an ivory ban, we’re making a very strong point.”

‘The Sky Won’t Fall In’ By Ditching Ivory: Auctioneer

John Albrecht, from auction house Leonard Joel, took the decision to stop selling products made of ivory or rhino horn a few years ago.

While the Australian market is much smaller than countries such as the United Kingdom, sales through his business were in the range of $200,000 to $250,000 a year. “It began as a very personal decision which became a corporate decision that we decided on pursuing,” he said.

“It was very confronting when we realised how significant we were in this material, and decided we didn’t want to do it anymore.

“As once the biggest trader in the country, we’ve proven that the sky won’t fall in.”

He argued there had been limited reaction locally to Leonard Joel’s unilateral decision, and said he hoped others would get on board. “Ultimately, it will be terrific if nothing with ivory or rhino horn was ever sold, but I think there can be somewhat of a commercial balance struck without it opening the floodgates.”