KOLKATA: Jaldapara National Park, which has the highest number of rhinos in West Bengal, lost one of its foot soldiers on Sunday. Madhubala, the oldest guard elephant of the park, died in Moiradanga area in the morning due to old age. She was 90. 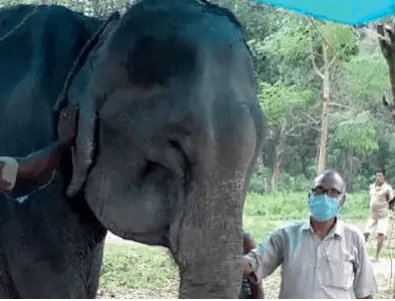 Original photo as published by The Times of India. Madhubala served Jaldapara National Park for 50 years.

Talking to TOI, state’s chief wildlife warden Ravi Kant Sinha said Madhubala had lost the last set of molar teeth recently. “She was born in 1930 and was purchased by the forest department some time in 1969-70. She served the park for 50 years, patrolled different beat areas during its career, and gave birth to eight calves in the park. The park pays tribute to its oldest guard of 50 long years for outstanding, untiring service,” he added.

Talking about some of Madhubala’s greatest achievements, Sinha said her role was commendable during the rhino vaccination drive in 1992, when a wild elephant had died of anthrax in the park. “The park had only 33 rhinos at that time. Since an elephant had died of anthrax, we didn’t want to take any chances and decided to vaccinate the rhinos. Madhubala played a key role as our foresters went on vaccinating (through darts) at least 23 rhinos in the park,” the chief wildlife warden said. The park, he added, is now home to more than 230 rhinos.

Usually, an elephant is not put to work by the department once it turns 65. “But Madhubala had to be roped in recently following the mysterious deaths of five rhinos. We had to vaccinate a few rhinos after the recent deaths,” the officer said. According to Sinha, an elephant has six sets of molar teeth. “After losing her last set recently, Madhubala couldn’t even eat,” he said.

Madhubala, a source said, was also occasionally used for tourism activities. Jaldapara now has 93 guard elephants while Gorumara and Buxa have 18 and 2 jumbos respectively.

Meanwhile, a male rhino, about 30 years old, was sedated, treated and revived successfully in Jaldapara on Sunday. The rhino was injured while fighting with another; it had deep gash wounds, a senior official said.