The coronavirus pandemic may have grounded Dr Jane Goodall but she is putting her time in lockdown to good use – by calling for a global ban on wildlife markets linked to the outbreak.

The renowned conservationist, 86, who typically travels 300 days a year, has pivoted to making calls, recording podcasts and videos around the clock, relentlessly pushing her lifelong message of protecting the natural world.

She told The Independent: “I have never been busier in my entire life, except perhaps the last days of trying to get my PhD thesis written.”

In the 1960s, Dr Goodall’s research on the behaviour of chimpanzees in Tanzania discovered that our closest living relatives were a lot more like us than previously believed – they have their own personalities, can use tools, mimic each other and grieve for the loss of friends. 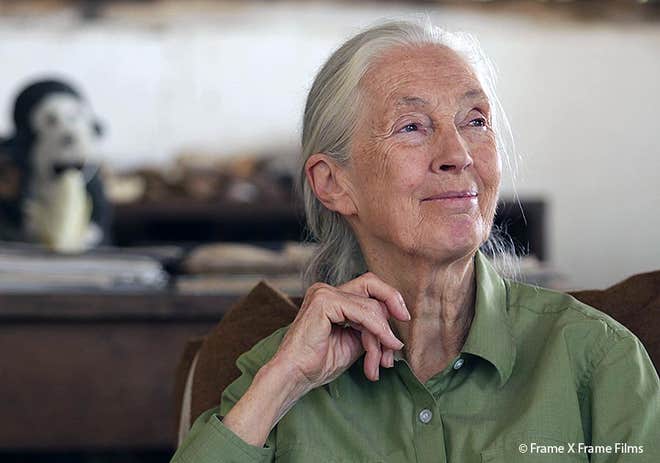 Original image as posted by The Independent

For decades, she has urged the world to respect nature, a message that has never been more acute in the face of the coronavirus that had led to more than 98,000 deaths and 1.6 million confirmed cases around the world, also decimating the global economy.

Environmentalists told The Independent last month that the coronavirus would not be the last pandemic to wreak havoc on humanity if we continue to ignore links between infectious diseases and destruction of the natural world.

Zoonotic diseases – those transmitted from animals to humans – cause 2.5 billion cases of human illness and 2.7 million deaths each year around the world, according to the National Institutes of Health. The spread of diseases such as HIV, Ebola, Sars, Mers and Zika are also believed to have originated in animals.

Dr Goodall, along with fellow activists and the UN’s acting executive secretary on biological diversity, Elizabeth Maruma Mrema, are calling for restrictions on wildlife trafficking and the sale of live animals at “wet markets”. The coronavirus outbreak is believed to have originated at such a market in Wuhan, China, where wild animals were sold, and made the jump to humans from animals kept in close proximity.

“As we destroy the environment, animals are living in smaller and smaller spaces, and viruses are transferring from one animal to another,” Dr Goodall says.

“Then there’s wildlife trafficking and the handling of wild animals. They are kept crowded together with people in the meat markets. Not just in China, but across many parts of Asia and also with the bushmeat trade in Africa.

“This is where a virus gets the opportunity to jump from animals into people, and that’s what happened with Covid-19.

“The awful thing is that this has been predicted. People knew it was coming, they talked about it but nobody did anything.”

She adds: “We have moved into this destructive and greedy period of human history where we are destroying the environment and putting economic growth ahead of environmental protections, even though we are thus destroying the future for our own children.

“Now we see this resulting in this current pandemic, which is having a horrific effect on the planet.”

“I’m hoping that governments around the world will cooperate with the facts and that there will be a global ban on all of these markets, trafficking and eating of wildlife.

“But we also have to remember that some of these epidemics have started with viruses jumping from domestic animals in awful intensive farms, where the conditions are horrendous, with crowding and poor hygiene.

“It’s not just wildlife, it’s the way that we treat our domestic animals, too.

“Science has now admitted what as a little girl I learned from my dog. Animals, like us, are sentient. They can feel fear and despair. They have personalities and are amazingly intelligent.

“When we talk about wildlife trafficking, we just think, ‘Oh, that’s wildlife’. But it’s millions of individuals who can suffer, feel pain and despair.

“If we go on treating animals the way that we are, that is going to hit back on us, as it has.”

In an op-ed this week, Dr Goodall wrote: “This is a global trade, and every country and individual must do its part to create more comprehensive legislation to protect wildlife, end illegal trafficking, ban trafficking across national borders, and ban sales (especially online). And we must fight corruption that allows these activities to continue even when they are banned or illegal.”

Dr Goodall, who was created Dame Commander of the Order of the British Empire (DBE) in 2003, says individuals, too, can play a role.

“Some people are raising moneys to help NGOs keep going. We are trying to protect chimpanzees in Africa because they can catch [Covid-19] from us and they are endangered.

“Our Jane Goodall Institute (JGI) people are wonderful – they’re rising to the challenge. Many people giving even small donations makes a big difference to our teams in the field to get the proper testing kits.”

It is crucial that any bans on markets and trafficking take into account the people in different parts of the world whose livelihoods and diets currently depend on wildlife, Dr Goodall says.

“If we suddenly close everything down, as there has been a demand to the United Nations, we have got to think of how these people rely on wildlife and find alternative ways for them to make a living.”

“There’s a microcredit program where groups, mostly women, can take out tiny loans to buy a few chickens and sell the eggs or have a tree nursery and sell the saplings, for example.

“It’s what people want, not what we impose upon them. The only criteria is that it’s got to be environmentally sustainable.”

The coronavirus pandemic has amplified the devastating consequences that can unfold when we don’t respect boundaries with nature.

In the US, Donald Trump has rolled back environmental protections, withdrawn the country from the Paris Agreement on climate change and overhauled the Endangered Species Act, which environmentalists say puts more wildlife at greater risk of extinction.

Dr Goodall is not optimistic that Mr Trump will change his views on protecting the environment, even in the wake of the coronavirus.

“I kind of doubt it. I don’t know, it should do,” she says. “But our prime minister in the UK is also pushing economic development ahead of environmental protections. The same is true in Brazil and Tanzania.

“It’s not just President Trump, but he sort of hits the media because he sometimes says some very strange things.”

But there are some leaders that give cause for optimism, Dr Goodall says.

“Leaders of countries like Costa Rica and Colombia and a couple of African countries are taking very firm steps to protect the environment. More and more European and US NGOs are doing what they can to help.”

She adds: “What I’m hoping is because of the shutdown worldwide, many places are now seeing unpolluted air.  I think a lot of people living in the cities have never known what it’s like and now they’ve got experience.

“I’m hoping that there will be a groundswell of people who are so horrified at the thought of going back to polluted skies that the sheer numbers will force governments to change their policies.”

Since 1991, she has encouraged young people to protect the natural world through her youth scheme, Roots & Shoots.

“Roots & Shoots is now in 65 countries, and my vision is to have the programme everywhere. That’s just a dream, but on the other hand, it began with 12 high school students, and since then hundreds of thousands of young people have been through the programme. Each group of Roots & Shoots chooses three projects to make the world better: One to help people, one to help animals and one to help the environment.

“Many of them are now in influential positions, and they hang on to the values that they acquired. Their message is every one of us makes an impact every single day and we can choose what sort of impact, unless we are living in desperate poverty – in which case we just do what it takes to stay alive.”

At a time when there is so much despair and anger from young people about the future because of climate change and environmental destruction, Dr Goodall tries to offer hope from her own experiences.

“I lived through the second world war when I was a little girl. It was very grim. We were then fighting a physical enemy, and this is an invisible enemy but the results are sort of the same. We never knew where the bombs were going to fall, which houses would be destroyed, which of our friends would be killed, and that’s a little bit the same now. But we came through it.

“I was in New York at the time of the fall of the Twin Towers, the 9/11 terrorist attack. It seemed like the end of the world but we got through that.

“There’s this indomitable human spirit you can see all around the world in communities helping each other.

“I’ve seen so many wonderful stories of people helping each other, taking food around and making themselves available for telephone calls from lonely, frightened people.”

She adds: “I myself have started reading children books so that they can get these stories while they’re forced to be at home and sending out video messages of encouragement that we will get through this – we must not give up, and let’s do our bit.”

The coronavirus, Dr Goodall says, may alter how she spreads her message.

“It may force change. I imagine when the airlines start flying again they may have to put their fares up so it may not be possible to do as much flying as I did.

“I look on it as practice for the time when my body says, ‘No Jane, enough, we‘re not going to allow you carry on like this’. Because it’s very exhausting, all the travelling I was doing.

“However, we have to get the message out that we’ve got to change but let’s have hope that we’re going to come out of this better people.

“We have to push our politicians in the right direction that we want.”