By NewsroomNovember 2, 2021Conservation personalities
No Comments 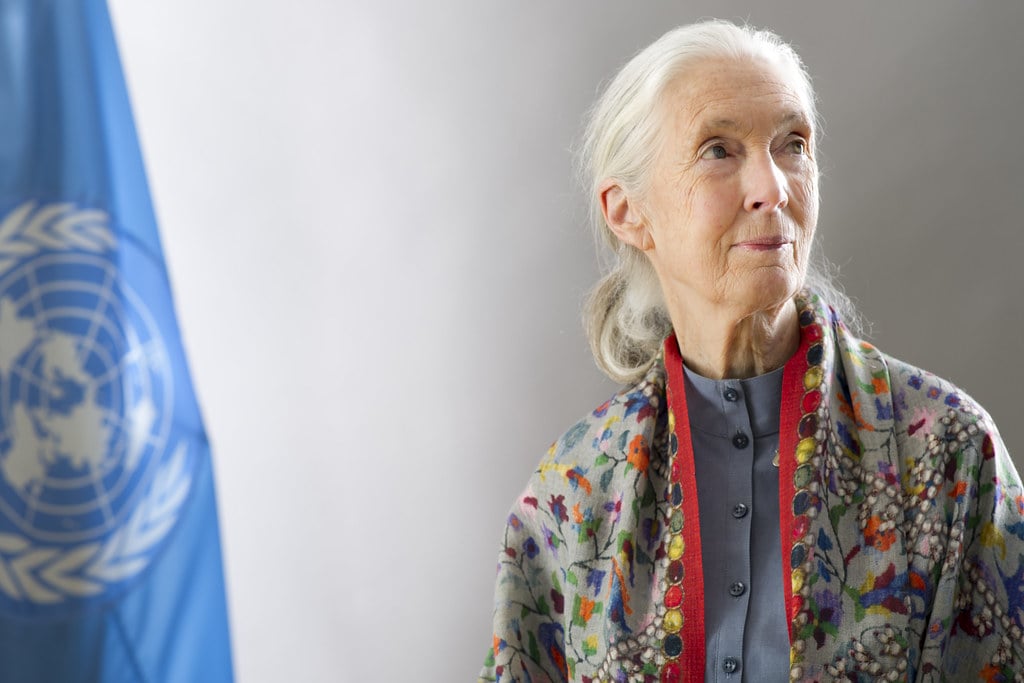 Half a century ago, Jane Goodall was spending months at a time sitting in the Gombe forest in what is now Tanzania waiting for wild chimps to approach her so that she could observe their behaviour. Her superhuman patience paid off. The young researcher discovered that chimps are more like us than we had imagined – lavishing affection on their young, forming social hierarchies, making tools and even warring with rival bands.

But Goodall says that her most vital work began when she left the forest and started travelling across the globe to talk about climate change and the tragic loss of biodiversity.

The pandemic has kept the 87-year-old naturalist at home in Bournemouth, where she continues to speak out online, especially with the young people participating in “Roots & Shoots”, a volunteer programme she organised that empowers young people in 60 countries to work in their communities to improve the lives of humans, animals and the environment.

She’s also been working on The Book of Hope: A Survival Guide for Trying Times, which is published by Viking. In a series of dialogues with co-author Douglas Abrams, she spells out her four reasons for hope: the amazing human intellect; the resilience of nature; the power of young people; and the indomitable human spirit.

In a recent interview with The Washington Post, Goodall spoke on climate change, the state of the planet and why she has not yet given up hope on the human species. The following has been edited for length and clarity.

Q: Isn’t it a bit audacious to come out with a book about hope at this moment when so many are feeling anxious and fearful? What makes you hopeful?

A: I was five years old when the Second World War began. There was a time when Britain stood alone in Europe against the might of Nazi Germany. The rest of Europe was overrun and defeated, or they capitulated. Actually there was no good reason for hope. We didn’t have the defences. We hadn’t built up an adequate army, navy or air force. But we did have some very brave young men, and we had [Winston] Churchill saying “We’ll fight on the beaches, we’ll fight in the cities, we’ll fight in the lanes and we will not be defeated.”

Q: Some people would have a darker view of human nature. They might think that humans are basically selfish and incapable of acting for their own long-term good, or for the long-term good of the planet.

A: I think it’s true that a vast number of people feel just as you said. But on the other side of the coin, there is a growing awareness of the problems and also of the incredible progress that is being made in all sorts of technologies that can work against climate change. The media deluges us with doom and gloom, everywhere you look in the papers, on television. And yes, they need to tell us these things. But they also need to tell us about all the great projects around the world, the amazing resilience of nature, the incredible people that are making change in the most miraculous ways.

Q: Some people say that we need to go through a period of real destruction before humans are moved to actually change the way we operate.

A: Well yes, when I say “good news” don’t get me wrong, but the good news for climate change is that no longer is it mainly in the news about countries like Bangladesh, but it’s hitting the western world. Think of the recent Hurricane Ida in the US, think of the flooding in Europe. It’s when people get personally hit by these things that they start to realise – “Wow, this is really terrible. We need to do something about it.”

Q: Much of the land around the Gombe forest has been deforested. You speak in the book about how you’ve been inspired by young people and others are helping to restore it.

A: Years ago I flew over this bleak landscape, the Gombe Forest surrounded by bare hills because there were more people than the land could support struggling to survive, cutting down the trees on the slopes in a desperate effort to get more land for crops and to make charcoal. That’s when it hit me: if we don’t help these people to find ways of making a living without destroying the environment, we can’t save chimps, forests or anything else. Now we don’t have bare hills around Gombe thanks to our TACARE [or “Take Care”] programme, which has been planting trees and working with the villagers to help improve their lot.

Alleviating poverty is a major task. But we need to do it if we are going to save the environment. And we have to think about population growth. Right now there are over 7.5 billion people. Estimates for 2050 are closer to 10 billion people, and we still continue with business as usual. Already we are using up finite resources faster than nature can replenish them. It’s supposed to be politically incorrect to talk about the population. But we have to think about it.

Q: You discovered that chimps make tools, solve problems and experience many of the same emotions that we do. We are now finding out that other creatures who are not close to us in an evolutionary sense are highly intelligent in their own ways.

A: Absolutely, whales, dolphins, elephants and lions, all these amazing birds, many of whom perform better than chimps… When I started my work, I was told that I should have numbered the chimps, that was scientific, that I couldn’t give them names, as I did, I couldn’t talk about intelligence, personality or emotions because those things were unique to us humans. But I’d already been taught by my dog as a child that this was rubbish. You can’t share your life with an animal, can you, and not know that we are not the only beings with these things.

Q: We’ve sent probes to the planets looking for life elsewhere in the solar system. But we haven’t figured out how to communicate with other species on the planet. Do you see this happening in the future?

A: Yes, there are people working on animal language. But the main thing is to understand that we’re trying to look for other life before we have discovered everything that is on this planet. Every time people go down into the deep oceans, they find new species.

Q: You say in the new book that humans are intellectual but not necessarily intelligent. What’s the difference?

A: The intellect solves problems and it can do intricate mathematics and work out what’s out there in the universe, galaxies and solar systems and so on. But if you are intelligent, you don’t destroy your only home, that isn’t intelligent. We seem to have lost wisdom.

Q: Wisdom implies the head and heart working together.

A: That’s right. With the head and heart together we achieve our true human potential. Recently I was talking to the CEO of a big corporation in Singapore, and he said, “Jane there are three reasons why I changed my company,” which had previously been destructive, into a green and carbon neutral operation. One was seeing the writing on the wall, seeing that natural resources were diminishing and realising that if he kept on with business as usual, that was the end of his business. The second was consumer pressure, people demanding ethically produced products. But he said that the last thing that convinced him was his little girl when she was 10. She came back from school one day and said, “Daddy, somebody told me that what you are doing is hurting the environment. And that’s the world I’m growing up in.” That went straight to his heart.

A: If we cut down a forest that we are relying on for clean air and clean water, that’s stealing the future, it’s not borrowing. Because when you borrow, you pay back. How are we going to pay back a destroyed forest or a polluted ocean?

A: We’ve already got the solutions to all these problems. There are amazing ways to restore fertility to overused farmland, we know what to do to minimise future pandemics by closing wildlife markets and banning the factory farming of animals. We know how to improve biodiversity and the health of the soil by changing from monocultures and industrial farming to regenerative agriculture, permaculture and so on. We’ve got a window of time to do these things. But it’s not a big window and it’s closing.

Q: Are you heartened by the fact that young people like Greta Thunberg are becoming activists?

A: Children are getting environmental education at schools. We never got that. They are being told that we are hurting their future and they are angry. Greta’s movement has raised a lot of awareness. I also feel anger, but my way is different. I don’t tackle things in that way.

Q: You write in the book that you feel that you have been personally guided by a higher intelligence.

A: I don’t know what to call this higher being, but I feel it very much in the forest, this deep spiritual connection. I love it that so many top scientific brains have also come to this conclusion that there is an intelligence behind the universe. Einstein was one. Francis Collins, the director of National Institutes of Health in the US, who unravelled the human genome, started as an agnostic and ended up being convinced that there is a higher being.

Q: It’s customary to end interviews like this by asking what you would like your legacy to be. But you are someone who is more concerned with the planet than with Jane Goodall. So my question for you is: what kind of future would you like to see?

A: If we respect nature, if we respect animals, if we respect one another, things would be very different. I want a future where we’ve learned to live in harmony with the natural world, where we develop new ways of living, ways of growing food, ways of making money. You know we’ve got to lose this arrogance that just because we’ve got a brain that can design a rocket to go to Mars it doesn’t mean that we have any more right to be on this planet than an octopus. We need to realise that we’re part of this natural world and our lives depend on it.