By NewsroomJuly 27, 2021Interview
No Comments 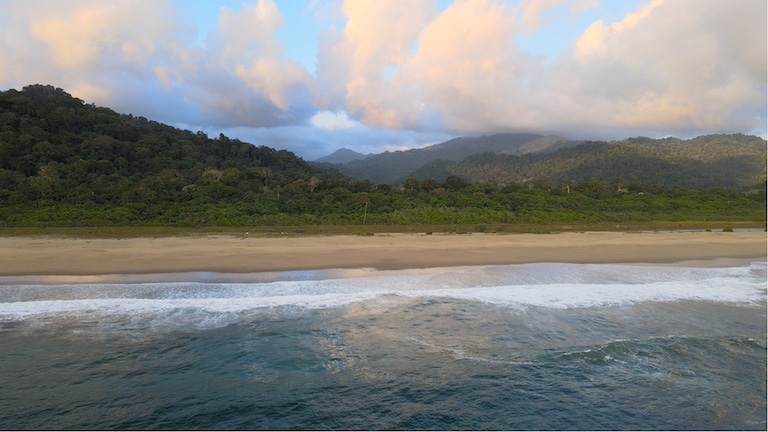 One of the remaining prime habitats of the Javan leopard on the east coast of East Java province. Image: Sintas Indonesia/As originally published by Mongabay.

Hariyo “Beebach” Wibisono studies Javan leopards, the last remaining apex predator on Indonesia’s island of Java, which, with a land area about the size of Alabama, is also home to 147 million people, including in the country’s massive capital city, Jakarta, plus other metro areas.

Despite these dense urban landscapes, pockets of natural forest persist around the island, and some of these are still patrolled by Panthera pardus melas: with the extinction of the Javan tiger — last glimpsed in Meru Betiri National Park in 1976 — the critically endangered Javan leopard is the only big cat left on the island.

To get an update on this iconic species, Mongabay interviewed Wibisono via email, who shares what is currently known and makes the case for leopard conservation: “People living in Java should preserve the leopard to assure that the remaining forest ecosystems are healthy for human living. Traditionally, some Javan tribes believe that Javan leopard is a symbol of prosperity and guardian of the forests, which provide them with healthy water and fresh air.”

His responses were edited lightly for brevity and clarity.

Mongabay: What is the current population estimate for wild Javan leopards?

Hariyo Wibisono: Our most recent estimate was 320 (between 120 and 570) adult individuals based on the best available, site-specific density estimates extrapolated to the available forest habitats.

Mongabay: What kind of habitat do they need and how much habitat is left on Java?

Hariyo Wibisono: Although it depends primarily on primary and secondary forests, the Javan leopard is also highly adaptable to various types of human-modified land uses, including mixed agricultural land, production forests, and plantations.

Prior to 2000, Java had lost the largest portion of its natural forest, with only 23% of the island forested. Further, between 2000 and 2017, Java had lost nearly 70% of its forest. The highest deforestation occurred between 2000 and 2013 with 65% forest loss or nearly 5% per year, mainly due to agriculture and infrastructure developments. After such period, forest cover in Java is relatively stable with only 1% forest loss per year.

Mongabay: What are their main prey and are those populations rising or falling?

Mongabay: What are the causes of conflict between Javan leopards and humans?

Hariyo Wibisono: Small and isolated habitats, and hard edges between the habitats and humans (settlements, plantations, agriculture). As a habitat generalist, Javan leopard is highly resilient to human modified land uses, which provide productive habitats for the leopard prey. As a result, the leopard often forages beyond the forest for prey. This creates overlapped areas for human and leopard activities.

When foraging for wild prey, the leopards often encounter and raid livestock raised by the forest-edge communities. Compared to tigers, Javan leopard is more cryptic, thus rarely attack humans. The most common conflict is, therefore, the fear of local communities when witnessing leopards crossing their gardens looking for prey. In that situation, the local communities often set up traps to capture the leopard.

Mongabay: How many leopards are removed from their habitat each year, whether for the illegal wildlife trade, or otherwise?

Mongabay: This seems like an unsustainable rate of removal given their already low population numbers. Though most are sold as stuffed mounts, many are used in rituals: are these traditional kinds of rituals, and do you think the people know the poor population status of the animals?

Hariyo Wibisono: I believe most people living in Java are not aware of the critical status of Javan leopards, except for conservation practitioners and some scholars. In fact, more people still believe that Javan tigers still exist, thus overlooking the Javan leopard.

I know only one ritual in Java named Reog Ponorogo which uses a tiger head and pelt for the ritual, but nowadays it also uses Javan leopard as a substitute, since tiger parts are becoming more difficult to obtain.

Mongabay: What should authorities do to help the Javan leopard, and what can citizens do?

Hariyo Wibisono: First of all, intensifying public awareness (e.g. social media campaigns) to mainstream Javan leopards’ critical status, strengthening inter-sectoral partnerships, and resource mobilization (e.g. funding) both from national and international sources should be the most critical strategies for the government.

Implementation of these three strategies is critical to support the following key objectives: a) strengthen the management of small and isolated habitats; b) implement a human-leopard conflict protocol; c) assessment of Javan leopard status in unknown habitats, identification of empty forests (forests without leopards or with few leopards) and repopulate these empty forests; d) update the existing Javan leopard action plan to adopt key findings of the most recent population and viability assessment.

Mongabay: About how many areas are left that can support them, and how many of those are able to support populations in the long-term?

Hariyo Wibisono: I and my colleagues identified 29 heavily isolated landscapes suitable for Javan leopard, covering less than 9% of the island of Java. Direct evidence of Javan leopard was confirmed from 22 of these 29 landscapes. Only three national parks could support the long-term survival of the leopard by themselves, with an additional two national parks if the adjacent suitable landscapes are included. The core area index and median patch sizes of Javan leopard habitats are the lowest among all other leopard habitats across their geographical ranges, indicating not much space for the Javan leopard to live and sustain for the long run.

Mongabay: Are these areas connected at all, or is more action needed to create corridors between them?

Hariyo Wibisono: Most habitats are disconnected and heavily isolated. Establishing physical corridors is very unlikely between these habitats as they are too far from one another, and mostly separated by well-established human settlements and infrastructure. The management of Javan leopard should follow meta-population management approaches which include repopulation of empty forests, exchange of breeding individuals between subpopulations (especially breeding females) and enhancing the existing physical connectivity wherever possible.

Mongabay: Besides their rarity, what makes this animal special and worthy of pride among the citizens of Java?

Hariyo Wibisono: After the extinction of Javan tiger, Javan leopard became the only apex predator on the island, whose role is particularly important in balancing the ecosystem. Thus, from the ecological point of view, people living in Java should preserve the leopard to assure that the remaining forest ecosystems are healthy for human living. Traditionally, some Javan tribes believe that Javan leopard is a symbol of prosperity and guardian of the forests which provide them with healthy water and fresh air.