By NewsroomMarch 11, 2020Anti-poaching
No Comments

Police reservists at Karibib intercepted a group of poachers, who had killed two oryx at Farm Albrechtshohe, but were only able to apprehend one of the four suspects.

The incident was reported in both the weekly wildlife crime statistics report – which is jointly prepared by the ministry of environment’s intelligence and investigation unit and the Namibian Police’s protected resources division – and the weekend serious incident report issued by the police.

In the incident report, the police head of public relations, deputy commissioner Kauna Shikwambi, said the four suspects entered the farm with dogs and spears at 03h00 and killed two oryx. 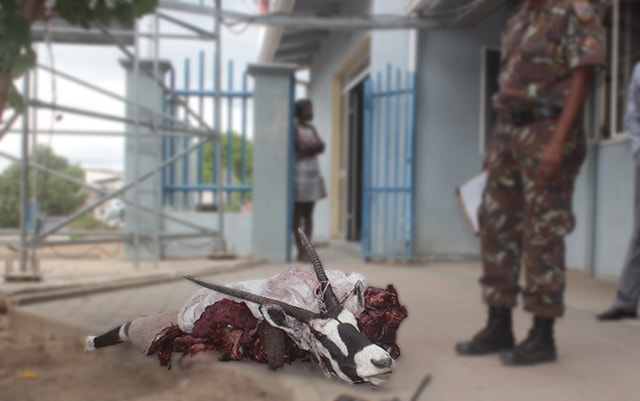 Original photo as published by The Namibian: The two dogs that were shot by members of the Otjiwarongo Neighbourhood watch organisation dispayed as well as the Oryx carcass, a spear and knives suspected to have been used in the illegal hunting activity on Farm Bernadette in the Otjozondjupa Region on Wednesday afternoon. (Photo by: Mulisa Simiyasa) NAMPA

She said the suspects were intercepted by police reservists and the K9 anti-poaching security members from Karibib while they were busy loading the carcasses onto a motor vehicle.

“Three of the suspects managed to escape but one of them, the owner of the vehicle, drove off from the scene but was later arrested and his vehicle was impounded,” she said.

Shikwambi stated the two oryx carcasses that were recovered are valued at N$20,000.

The wildlife crime statistics report indicated that in this past week, the police arrested and charged six suspects and registered four new cases.

Two Namibian suspects were arrested on Friday in Windhoek on elephant poaching/trafficking charges when they were found in possession of two pieces of elephant tusk.

Furthermore, two suspects were arrested on rhino poaching/trafficking charges, including cases of conspiracy to poach rhinos.

A Namibian was arrested at Okahao in the Omusati region last Wednesday for conspiracy to hunt protected game, specifically the rhino.

In a separate incident, an Angolan national was arrested at Omungwelume in the Ohangwena region for possessing rhino horns.

The charges laid against him also indicate that he might have entered the country illegally, as he did not possess a passport with an entry stamp into the country. Furthermore, he did not have documentation from an immigration official permitting his entry into Namibia.

In this arrest, the police seized a vehicle from the suspect.

The police also seized four live tortoises from a suspect at Omahenene in the Omusati region on Saturday.