By NewsroomOctober 8, 2019Conservation
No Comments

The Ministry of Environment and Tourism inaugurated the Kapinga Kamwalye Conservancy at Macuva village in the Kavango East region on Thursday. The conservancy borders the Shambyu and Gciriku traditional authorities.

Located in the Rundu Rural and Mashare constituencies and covering close to 1,698 kilometres, the conservancy stretches from the Okavango River, and about 3,000 people living in the surrounding villages are expected to benefit from its establishment. 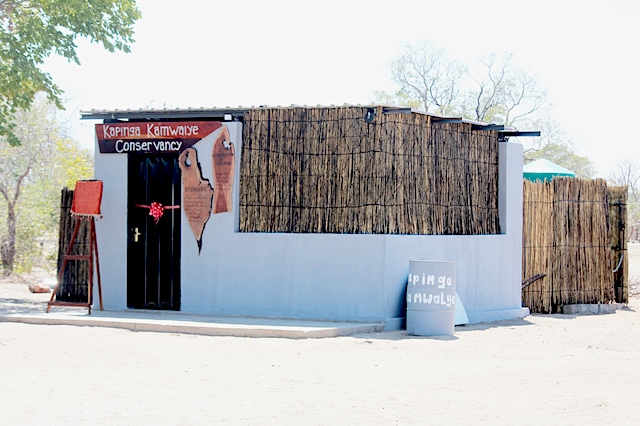 Original photo as published by The Namibian: ADMINISTRATION … The office of the newly inaugurated Kapinga Kamalye Conservancy in the Mashare Constituency of the Kavango East region. Photo: Nampa

Speaking at the inauguration, deputy environment minister Bernadette Jagger said Namibia has adopted a number of innovative strategies to achieve biodiversity conservation within the framework of national development plans and poverty reduction.

She said one of the strategies is the Community-based Natural Resources Management (CBNRM) programme, which allows the formation of communal conservancies through which rural communities have gained rights over the management of wildlife and tourism. CBNRM is a programme that provides a number of incentives to rural communities that are managing natural resources and generating income from the sustainable utilisation of wildlife and tourism.

Jagger said due to the commitment shown by rural communities, there has been a remarkable recovery and increase of wildlife populations, including key predator species and endangered groups such as elephants and the black rhino.

She added that CBNRM approaches are also being developed in sectors such as community forests, focusing more on woodland resources with the aim to promote the prudent use and management of plant resources available to rural communities. Senior council member of the Shambyu Traditional Authority, Edward Shikerete, said the Kapinga Kamwalye Conservancy would be an important step for rural dwellers to become more confident, pro-active and capable and in all aspects of their lives.

He said the income security of rural families could significantly improve through revenue and cash flow from the conservancy, adding that CBNRM activities can also provide employment to a few residents in the area.

Thomas Muronga, chairperson of the conservancy, applauded the ministry for its unreserved support, as well as the traditional authorities for engaging each other with regards to the borders of the conservancy.