Like Ali Baba who helped catch 40 thieves, Jorba, a police dog, helped catch 40 poachers at Kaziranga National Park in Assam during his seven years of service before he retired on Friday.

The skilled dog was accorded warm felicitation at Kaziranga by the authority and well-wishers of the park.

The Belgium Malinois, owned by Aaranyak, an NGO working for environment conservation, was taken to Kaziranga in February 2013 after a series of rhino-poaching cases there. The male dog, bought by the NGO in August 2011 and engaged first in Pobitora wildlife sanctuary in 2012, was trained in Guwahati by a foreign expert in tracking poachers.

The in-charge of sniffer dogs at Aaranyak, Anil Das, said Jorba is a dedicated dog and never created problems during his service period. “Though he was a bit scared of rhinos in the beginning, he later got accustomed to the animals of Kaziranga and helped the authority catch a poacher on the very first day in Kaziranga,” he said.

The expenditure for the dog was borne by Aaranyak, Das said.

Aaranyak secretary general Bibhab Talukdar said Jorba helped the forest department to catch as many as 40 poachers. “He was taken to Kaziranga from Pobitora because he was needed there,” he added. 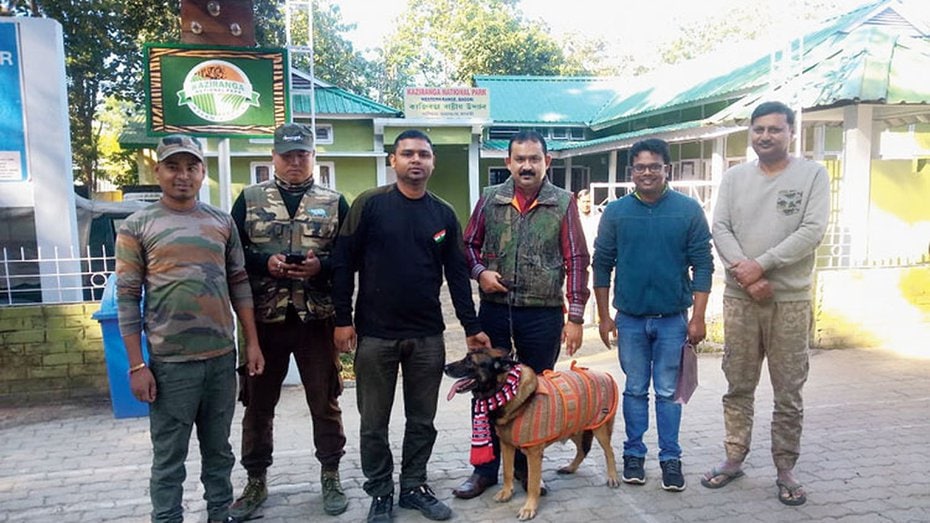 “We use this particular breed because of their extreme prey-drive capability. They are very helpful in arresting suspects. Once they pick up a scent and get a lead, they are capable of outrunning and bringing the suspect down if he tries to escape. This breed has been successfully used as military working dog by the US and European forces,” Talukdar said.

Former divisional forest officer of Kaziranga, Pradipta Baruah, said Jorba is very skilled. “He helped us track a dreaded gang of poachers in Lohore sapori and recover arms and ammunition used by them,” he added.

Outgoing Kaziranga DFO Rohini Ballav Saikia said the dog also helped to prevent poaching. “Jorba is a dedicated dog. He served us whenever we needed him,” he added.