By NewsroomNovember 7, 2019Anti-poaching, Conservation
No Comments

“Kaziranga is not for the faint-hearted,” Dimbeshwar Das says. He would know, because for 30 years now, Das has been working in the remotest, most forested corners of the Kaziranga National Park (KNP) in Assam. The decades have been eventful for the frontline forest guard, who has handled both man and beast with courage not many can boast of.

On Tuesday, his service was recognised in the form of the ‘Green Warrior award’, part of the Royal Bank of Scotland (RBS) Earth Heroes award, at a ceremony hosted in New Delhi.

“I joined the Park in January 1987, as a boatman. I was 23 then,” says Das. The subsequent years saw him promoted to the post of a forest guard, skilled at a number of things, but especially at catching poachers and hunters. 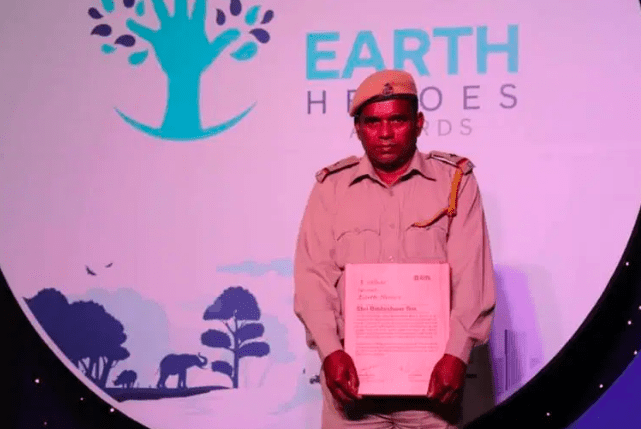 Original photo as published by Indian Express: Das’s commitment to his work in Kaziranga has earned himself the nickname ‘The Wall’.

“He’s been part of several operations that have led to the catching of a number of poachers,” says Rohini B Saikia, former DFO, Kaziranga. So much so that in 2013, Das had to change base from one range to another (within the Park), because of the number of threats he received. “I have been deputed to the interiors of the Park, densely forested and out of bounds for tourists. But it was only then, when the poachers threatened me, that I felt that my — and my family’s — life was in danger,” he says.

The 430-square-km Park, famous for the one-horned-rhino, is known to have very challenging terrain. “It has a high density of animals, but also of poachers, armed with the most advanced guns. So, a guard typically has to save himself both from wild animals and poachers,” says Saikia, who is now based in Guwahati as Deputy Conservator of Forests. In fact, Das’s commitment to his work in Kaziranga has earned himself the nickname ‘The Wall’.

“It is only in Kaziranga where guards have to camp inside the Park for months and months, without contacting their families. In the past, network was a problem, though things have become better now. In many other parts of India, guards don’t camp all night. In fact, a Supreme Court judgment had once referenced the unique ‘Kaziranga Model of Protection’, citing it as the best way to protect wildlife,” says Rathin Barman, joint director of the Wildlife Trust of India (WTI) and head of Centre for Wildlife Rehabilitation Conservation (CWRC) in Kaziranga.

Das says that while the facilities for the staff are much better now (earlier, they had to “walk for hours even to get ration”), there is still a severe staff crunch at the Park. In July, the first batch of a “Special Rhino Protection Force” (SRPF) was deployed in various parts of KNP, to specifically work towards rhino protection. Currently, the UNESCO World Heritage Site has 206 forest guards.

The RBS instituted the Earth Heroes Award in 2011 to honour those who work for the protection of the environment. Das, who has received Rs 2 lakh as cash prize, has been commended by the institute for his “outstanding efforts towards the conservation of the Great Indian One Horned Rhinoceros.”

The plaque also refers to his 29 years of service as a frontline staff, his work to catch “notorious poachers” and the threats to his family that made him “move houses several times”.

The 54-year-old Das insists that this achievement is not his alone, but of the entire KNP staff, who put their lives on the line to save animals. “Trust me, no one works as hard as the Kaziranga guards — if we didn’t work, the rhinos wouldn’t be alive,” he says, “You need to be alert 24/7 — during the annual floods, ever more so. I remember how last year we had to rescue a number of rhinos stuck in the river banks,” he says.

Das recalls another incident from 1994, when they had to tranquillise a tiger. “We were on elephants. Suddenly, the tiger caught one of the mahouts. It was then that I jumped down from my own elephant and blank fired. The tiger ran away. In this kind of job, you can’t afford to be scared — ever,” he says.