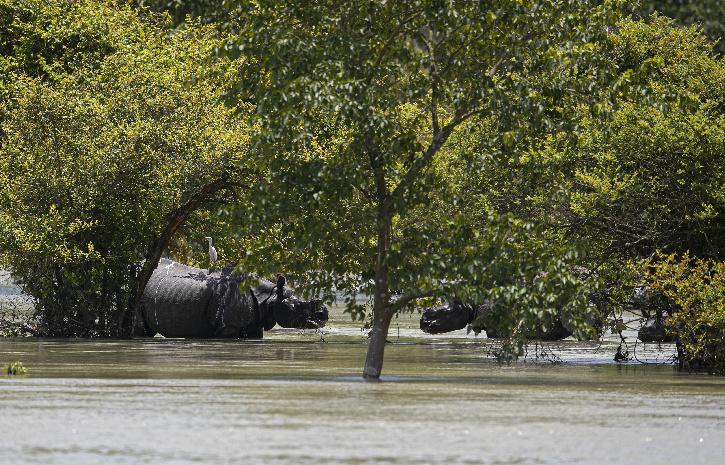 Original photo as published by IT News. Authorities said of the four carcasses have been recovered from the park’s central forest range and western and Burapahar forest range on Thursday, while two had died earlier.

The ongoing floods in Assam have not just affected humans, but animals too. And the Kaziranga National Park, the home of the endangered one-horned Rhinos, is also battling the deluge.

Authorities in Kaziranga have confirmed that six rhinos have been killed in the floods so far.

Authorities said of the four carcasses have been recovered from the park’s central forest range and western and Burapahar forest range on Thursday, while two had died earlier.

The national park has also lost 61 hog deer, while 121 animals were rescued.

While a lot of animals have managed to make it to safer grounds, there is a growing fear that the death toll could go up further if the rains continue like this.

90 per cent of the total park area is still reeling under water.

Out of the total 223 anti-poaching camps, 99 have been submerged by floods so far. Six camps have been vacated due to the floods.

All rivers of the state, including the Brahmaputra are flowing above the danger-level mark, which has breached a large number of aging earthen embankments across the state.

Meanwhile, the human death toll in the floods that began last month has risen to 71 on after four more people lost their lives on Thursday.

An ASDMA official said that over the past more than a month, 71 deaths due to the floods were reported from Sonitpur, Biswanath, Tinsukia, Lakhimpur, Bongaigaon, Kamrup, Golaghat, Sivasagar, Morigaon, Tinsukia, Dhubri, Nagaon, Nalbari, Barpeta, Dhemaji, Udalguri, Goalpara and Dibrugarh districts, while 26 others have been killed in separate landslides since May 22.

While the floods are an annual occurrence in Assam every monsoon, this year it has been unusually long and it comes amid the COVID-19 pandemic, which is making rescue and relief a challenge.

Stressing on the relief measures taken by his administration, the chief minister highlighted that relief camps have been set up for affected people, where enough groceries have been stocked. People are being provided with masks, regular health check-ups being conducted and medicines are also being stocked for the affected people. Apart from these, domestic animals are also provided fodder, he added.

“Apart from the flood, the state is also fighting COVID-19. I thank the people of Assam for their courage,” the chief minister said.