Kaziranga National Park in Assam gets bigger by 3,053 hectares (India)

By NewsroomSeptember 6, 2020Land conservation
No Comments 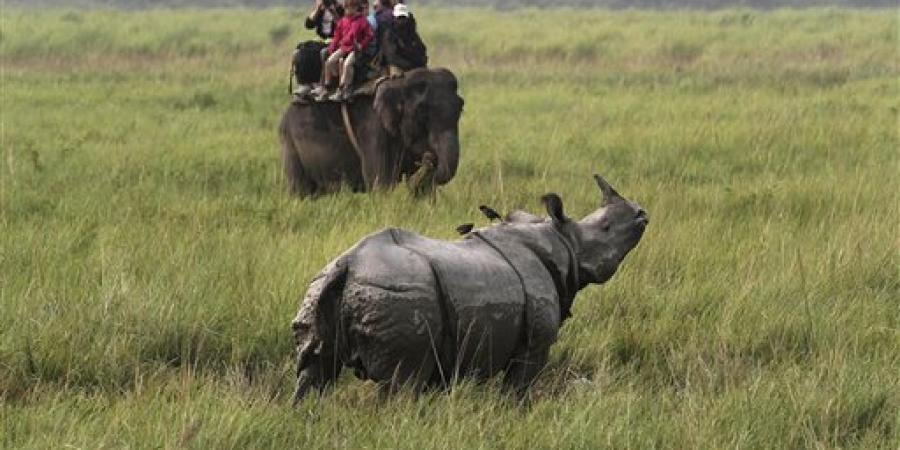 Tourists on an elephant watch a one-horned rhinos in the Kaziranga national park. (Photo | AP; as originally published by The New Indian Express.)

GUWAHATI: Home to the Asiatic one-horned rhinos, the Kaziranga National Park in Assam has got bigger by 3,053 hectares.

The government issued a notification approving the seventh, eighth, and ninth additions to the World Heritage Site. These include encroachment-evicted areas and wildlife habitat at riverine islands that were vulnerable to encroachment.

The seventh, eighth, and ninth additions have 176 hectares, 307 hectares, and 2,570 hectares respectively. However, in effect, the present 1,000 sq km-park will straddle 2,500 sq km through the linkage of habitats. The seventh and eighth additions will connect the park with Karbi Anglong hills while the ninth addition will stretch to the Nameri National Park in Sonitpur district.

“Areas are being added to the park after 35 years. We had six additions and we proposed three more. CM sir (Sarbananda Sonowal) had backed the park’s expansion. He is playing a major role in controlling poaching,” the park’s Director P Sivakumar said. He further said the advantages vis-à-vis increase in the park’s size would be far too many compared to the challenges.

“This will give adequate space to the increasing animal population. These are habitats-cum-corridors. So, the surplus population can migrate to the neighbouring habitats using these areas. The additions will ensure better corridor connectivity with Orang National Park, Nameri National Park, and Karbi Anglong and reduce the fragmentation of habitat. Major issues like the inbreeding of tigers could be controlled,” Sivakumar said.

The park will now be required to add some more forest camps to fine-tune patrolling, he added.

As part of the ecosystem, animals, particularly elephants and deer, stray out of the park during flood and move to the Karbi Anglong hills. This is the time when the poachers increase their activities. The addition of new areas to the park is expected to ensure the better protection of animals.