A special committee has recommended the delineation (laying down the exact boundaries) of nine animal corridors in Kaziranga National Park (KNP).

Wildlife or animal corridors are meant to ensure safe passage for animals between two isolated habitats. At KNP, famous for the one-horned rhino, animals are known to regularly move (especially during the annual floods) from the park area to the nearby Karbi Anglong hills through these corridors. Once the rains clear, they make their way back to the grasslands.

The recommendations, if enacted, will help put a spanner on construction activities in these sensitive ecological zones, which have been proving an impediment to the free movement of wildlife. 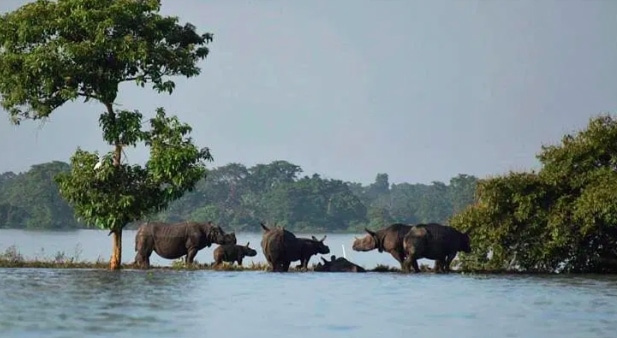 Original photo as published by Indian Express: The report says “Kaziranga is like nature’s gift and a unique combination of floodplains, river, and hills — a mosaic of habitat.” (File/PTI)

The committee — comprising members of the forest department — was constituted after a report by the Central Empowered Committee (CEC) and a Supreme Court Order of April 12, 2019, which banned mining and related activities along KNP.

The report has been submitted to the state government, a member of the committee confirmed on condition of anonymity.

The report is in public circulation after Bokakhat-based environmental activist Rohit Choudhry filed an RTI query regarding it. It was Choudhry’s application that led to the crucial CEC report and the SC banning mining in the UNESCO World Heritage Site.

To define the nine corridors, the committee considered human-wildlife conflict data over the past three years, animal mortality rate on the NH-37 highway, camera trap images, and also conducted a number of field visits and interactions with local communities. The corridors are: Panbari, Haldibari, Bagori, Harmoti, Kanchanjuri, Hatidandi, Deosur, Chirang, and Amguri.

“The committee has done its best in keeping the interest of wildlife and views of local administration while making recommendations for these nine corridors” states the report.

“Kaziranga is like nature’s gift and a unique combination of floodplains, river, and hills — a mosaic of habitat. If there is some catastrophe during floods, animals can go to the hills. When there are no floods, they can graze on the grasslands,” says DP Bankhwal, who retired earlier this year as the Principal Chief Conservator of Forests (Wildlife) (PCCF) and Assam Chief Wildlife Warden (CWLW).

However, the National Highway-37 (NH-37), that cuts across the Park, “fragments the once contiguous Kaziranga landscape into two discrete regions” according to the report. “This restricts movement especially during the floods when the NH-37 works as a link /temporary high ground,” says Bankhwal.

The report further goes on to state: “Human habitations and activities, tea plantations, truck parking lots and commercial establishments on either side of the highway are augmenting the fragmentation of the landscape. Despite the fragmentation, animals negotiate the NH-37 to seek refuge at the risk of getting killed in accidents.”

The report also points at commercial land use such as opening of resorts and dhabas, stone quarrying and industrial land use (stone crushers etc) as other important reasons to recommend new boundaries of these animal corridors.

“Many corridors pass through government areas as well as private land,” says P Sivakumar, Director, KNP, “That is why an independent committee was formed to make recommendations fairly.”

Bankhwal says that the only way these recommendations can have an impact is if corridors are notified. “A corridor should not be considered as just a passage but function as proper areas with proper resources for protection where animals can stop over and rest for a while,” he says.

Additional PCCF wildlife and CWLW Assam, MK Yadava, said while the report has been received, the matter is sub-judice and he could not comment further on the future action of the government.