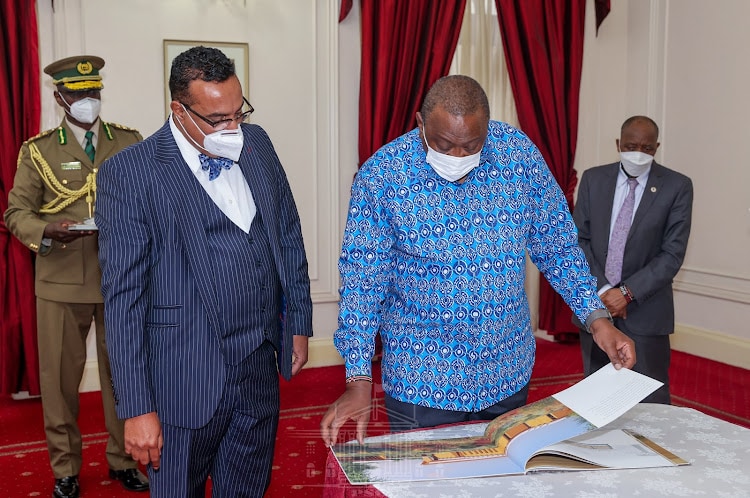 President Uhuru Kenyatta and the Tourism CS Najib Balala at the State House, Nairobi when he received the Animal Census Report. Image: As originally published by The Star.

President Uhuru Kenyatta has received the 2021 National Wildlife Census Report which was fully funded by the government, and conducted by the local experts.

The report was handed over to the president on Monday at the State House Nairobi by the Tourism CS Najib Balala, an event attended by the Head of Public Service Dr. Joseph Kinyua.

According to the census report, Kenya has a total of 36,280 savanna elephants, becoming the fourth largest population in the world after Zimbabwe, Botswana, and Tanzania.

The groundbreaking census established that the country is home to 1,739 rhinos among them two northern white rhino species, 897 black rhinos, and 840 southern white rhinos.

The president applauded Kenya’s wildlife conservation agencies led by the Ministry of Tourism and Wildlife and the Kenya Wildlife Service (KWS) for successful anti-poaching efforts.

“The reduction in losses in terms of elephants, rhinos and other endangered species is because of the great work that KWS, its officers, and men are doing to ensure that the (wildlife) heritage is protected,” Uhuru said.

He stated that wildlife is an important national heritage that needs to be protected and conserved for posterity and for the benefit of all Kenyans.

“Wildlife is our heritage; this is our children’s legacy and it is important for us to be able to know what we have in order to be better informed on policy and also on actions needed as we move forward. And it being a national heritage, it is something we should carry with pride,” Uhuru said.

The president said that with the comprehensive census findings, the government was better equipped to plan its wildlife conservation interventions, and tasked the Ministry of Tourism and Wildlife to transform recommendations in the report into policies and programs.

“Equally, we need to sit down together to see how we can bring on board the issues that you have raised (in the census report) which are now becoming of great concern,” the President advised, and called for the adoption of the proposal to carry out the wildlife census every three years.”

Regarding human-wildlife conflict, the president assured Kenyans that the government will continue seeking sustainable solutions to the challenge, and urged sector stakeholders to continue educating host communities on the importance of wildlife conservation

Balala thanked the president for the government’s facilitation of the historic exercise and assured the Head of State of his ministry’s commitment to the full implementation of the report’s recommendations.

Balala said the government had made tremendous progress on the issue of poaching and was now moving towards resolving the human-wildlife conflict challenge which he said was not getting adequate global attention.

“I am trying to raise this agenda internationally because there is enough funding in anti-poaching but there is no funding for communities. There’s no funding for people’s livelihoods. So, people have been forgotten in this sector,” Balala told the president.