By NewsroomApril 24, 2020Conservation
No Comments

A black rhino has given birth to a calf at the Meru National Park in central Kenya, a government official confirmed on Tuesday.

Black rhino is classified as critically endangered by the International Union for Conservation of Nature (IUCN) Red List. 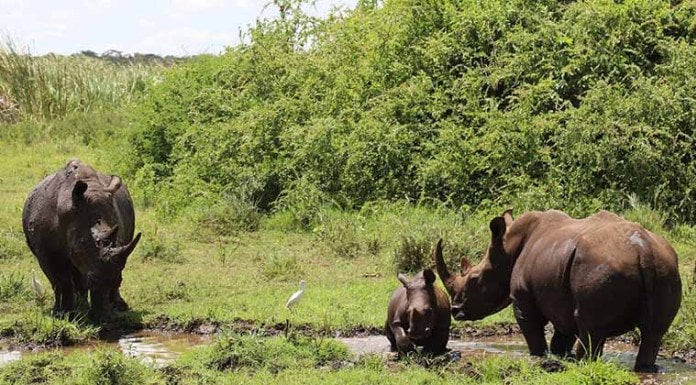 Original photo as published by News Ghana. A black rhino has given birth to a calf at the Meru National Park in central Kenya, a government official confirmed on Tuesday.

“We are happy to report a newborn black rhino in Meru National Park. Mother’s name — Akinyi. Akinyi has had four calves including the new birth,” Balala said.

He said Akinyi’s first three are males and her latest newborn has not been sexed yet. “The age of her newborn calf is estimated to be five days old,” Balala said.

The conservationists say the Meru Rhino Sanctuary has become a bastion of Kenya’s rhinos and a beacon of hope for the species as each new birth will be confirmed.

Sheldrick Wildlife Trust says March was a month for great celebration within Meru Rhino Sanctuary, as its population grew by three perfect babies. Kenya is now home to just over 760 black rhinos and 620 southern white rhinos, according to conservationists.