By NewsroomMarch 7, 2020Conservation
No Comments

The cricketer and nature lover who reached Kaziranga on Wednesday was busy round the clock for his documentary on wild animals of Kaziranga with special emphasis on rhinos.

In a tweet, the nature activist, who is involved in rhino conservation in Africa, said rhino population in India is booming as proper conservation measures have been taken here. 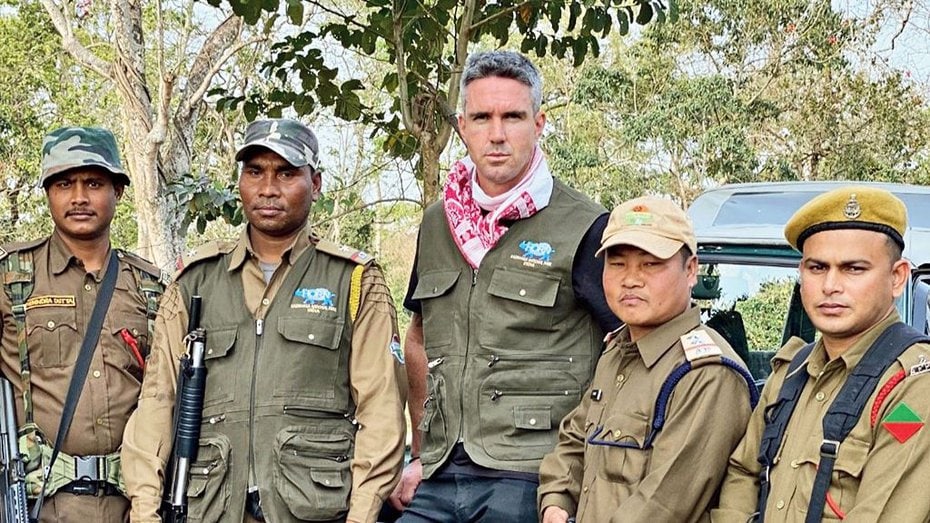 Original photo as published by Telegraph India: Kevin Pietersen with the forest guards in Kaziranga. (Picture by Sanjoy Hazarika)

He tweeted: “The rhino population in India is BOOMING! Africa should take note! Saving these iconic species CAN be done and IS being done here! Bravo, India!”

In another tweet, the cricketer said, “Kaziranga is full of elephants on the right and rhinos on the left.”

The cricketer encouraged the forest guards to carry out their duty properly. “Safeguarding India’s wildlife. It’s duty first then family. Duty looks after his family. A GREAT man who serves Indian wildlife with great PRIDE,” Pietersen said in another tweet. “He is much sensitive to the sound of nature and a good observer,” divisional forest officer (DFO) of Upper Assam wildlife division, Ramesh Ch. Gogoi, said.

On March 12, Pietersen will be the guest of honour in the opening ceremony of the four-day Kaziranga Festival, 2020. The festival will resume after a gap of 11 years.

Throughout the festival several workshops on conservation of wildlife along with sightseeing will be held where several experts and students will take part.

There will be different traditional games, a photography competition, an open session on conservation of flora and fauna of Kaziranga besides quiz, drama and a cultural programme. Chief minister Sarbananda Sonowal and finance minister Himanta Biswa Sarma will also take part in the open session.