Khama responds to insinuations of his involvement in poaching (Botswana) 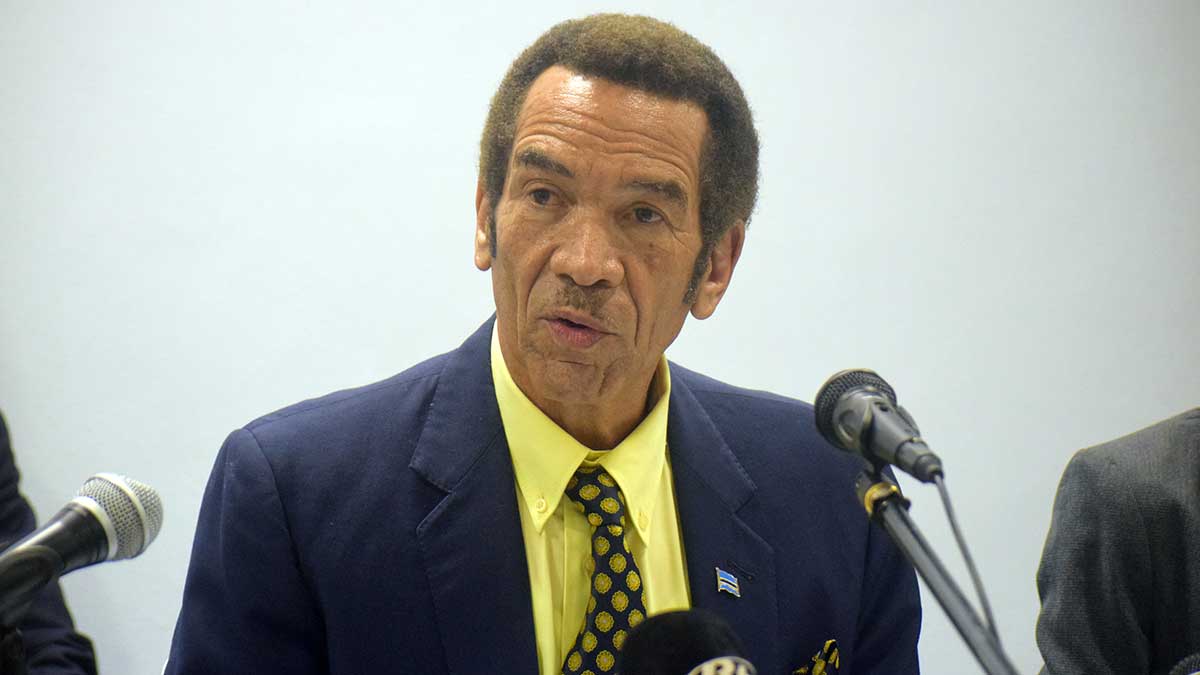 Ian Khama: “I can state with confidence that it is actually their incompetence in antipoaching which is politically motivated.” Original photo as published by The Voice.

Rhino poaching in the Okavango Delta reached unprecedented levels since 2018 with over 78 of the protected animals killed from then to date. The government has cried foul and blamed unnamed suspects that have been killing the animals for political motives.

One of the people being suspected in the killings of these animals is former president Ian Khama who has said that he was very aware of the slanderous suspicions.

“I am aware of the insinuations aimed at me. My response is that those making such comments have absolutely no experience or knowledge or even plan to tackle the poaching pandemic,” said Khama in response to recent comments made in Parliament about suspected rhino poachers who are allegedly working in cahoots with some foreigners to kill the endangered species.

For the past two years, the government has been trying without success to crackdown on rhino poaching but the numbers of poached animals continue to rise every year. According to Parliament, in 2013, two rhinos were killed, followed by one killing in 2014, none in 2015, 2016 and 2017.

However in 2018 the numbers went up with 12 killed that year, 29 in 2019 and, 37 rhinos in the first half of this year, 2020. Khama who stepped down from presidency at the end of his ten-year term to give way to the current president, Mokgweetsi Masisi says those who suspect him for the rhino killings were not only wrong but also clueless in conservation and anti poaching matters.

During his term, Khama, an internationally acclaimed conservationist, banned hunting in 2014, but when Masisi took over the reigns of power, he lifted the hunting ban, a move that was criticized by international conservation groups, but supported by local communities.

Explaining why poaching was low during his tenure Khama said he “took a direct interest in the matter to the point where he had weekly briefings to ensure we stayed ahead of poaching. We provided resources, which have now largely ceased to function or are withdrawn.”

When Masisi became the President, he withdrew military ammunition from wildlife department.

It was during the debate of a motion calling for the re-arming of this department those insinuations of political motive for poaching resurfaced in parliament, without mentioning names.

The minister of Defence, Justice and Security, Kagiso Mmusi remarked that, “Some people were quoted in newspapers that they can end this problem (poaching) within a month. We were shocked that how, when we have been battling this for so long, how will one person achieve it within a month.”

However Khama dismissed Mmusi’s comment as a show of desperation on the part of government, which is failing to combat the poaching, “If they choose to interpret what I said to mean I am responsible for the poaching, that just goes to show how desperate they are to lay blame elsewhere for their failings.”

Khama added that, “I have had many years experience dealing successfully with the challenge. The huge amount of knowledge and experience I have gained in the process, equals the amount of ignorance he has on the matter. It is that knowledge of mine I was referring to when I said I could make a difference towards the decline in poaching as I have done in the past.”

When debating the motion to re-arm wildlife department, the minister of Health and Wellness, Sethomo Lelatisitswe said, “I hear you (Mmusi) saying some people said they can end this thing within a short space of time. So I want to ask you, since fire arms are very expensive is there fear that probably this kind of motion is sponsored by firearm dealers who wants to get these arms into the country through this window?”

Agriculture and Food resources minister, Beauty Manake also expressed fears that dealers in arms and ammunition could have sponsored the motion.