By Peter BorchertNovember 18, 2020Editorial
No Comments 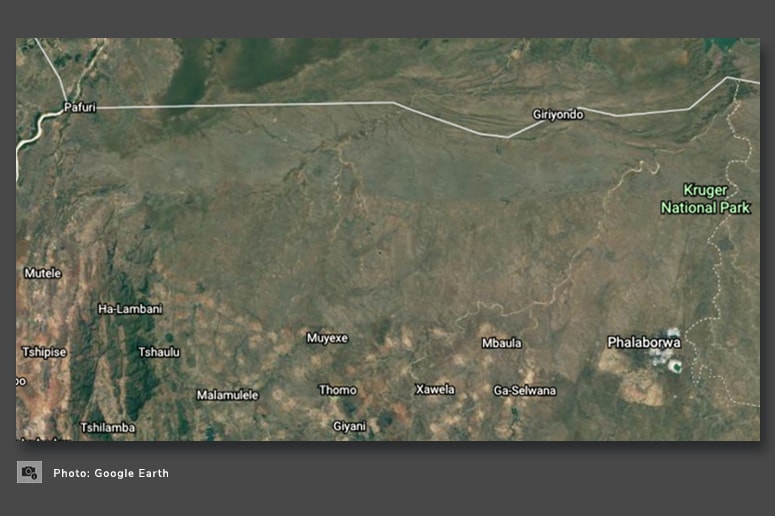 The stark contrast between the “emptiness” of the Kruger National Park and (bottom left) the rural sprawl of South Africa’s Limpopo Province. The thin white line running across the top of the image is the border between South Africa and Mozambique. The watercourse meandering through the far left is the Limpopo River, the boundary between South Africa and Zimbabwe to the north. Source: Google Earth.

When one talks about the biological wealth of South Africa’s Kruger National Park, it is impossible not to reflect that this undoubted jewel in Africa’s conservation crown is surrounded by some of the poorest people in the world.

This noose of extreme poverty is, without doubt, the greatest threat to its survival. And it is fundamental to understanding why the continuing slaughter of rhinos for their horns is such a hard problem to solve. When chatting about this to friends living in rich countries, I am often left with a sense that, although they clearly see the issues in broad brush strokes, I fail to convey the real depth of the problem. Perhaps this has something to do with skewed perceptions of the colossal, maybe unbreachable gulf between real wealth and real poverty?

The world is a very unequal place in wealth terms. Take Jeff Bezos, Bill Gates, and Mark Zuckerberg, for example. This trio has a combined treasure approaching half a trillion U.S. dollars. To put this into a local perspective, this sum exceeds the GDP of South Africa, Mozambique, Zimbabwe, Namibia, Botswana, Zimbabwe, and Malawi—about $382 billion in total. At some $280–290 billion dollars, South Africa heads this lowly bunch by a country mile.

When you delve a bit deeper into South Africa’s wealth, you find that, despite being more than a quarter of a century into its democracy, this fair land is quite possibly the least equal nation in the world. Here just one percent of the populace controls 55 percent of the country’s total wealth, while 10 percent control 86 percent. And when you consider that South Africa is far from the most impoverished nation in Africa—it is second only to Nigeria in wealth—you begin to appreciate the chasm between the world’s richest people and the depth of developing world poverty.

So, to return to Kruger National Park. The Park lies within the boundaries of two South African provinces: Limpopo and Mpumalanga. If you zoom in on the map, you see that just seven municipalities in these provinces embrace the Park and the land adjacent to it. Together they make up a patch of African real estate of some 23,000 square miles—for convenience I call this “The Greater Kruger”. It is home to about 3.8 million people. That’s about the land size of the U.S. state of West Virginia (Pop. 1,8 million) or the Baltic country of Latvia (also Pop. 1.8 million).

The size of this region and the availability of land for people and their activities is deceptive. The Park sprawls across some 7,500 square miles, or about a third of “The Greater Kruger’s” 23,000 square miles. This means that those 3.8 million people have to make a living in the remaining 15,000 or so square miles immediately adjacent to the Park’s western fence line.

Who are these people? Consider the following demographics. The under 20s make up 41–50 percent of all communities. Only 23–40 percent of the total population have finished high school, and 9-18 percent have no education at all. On average, except for “wealthier” areas around Mpumalanga’s capital of Mbombela, household income is no more than $1,000 a year. That means entire households have to come out on less than $3 a day. If you feel inclined to peel back the onion layers of this society further, explore the interactive Wazimap site where I’ve gleaned most of these data.

In Kruger, in all of its 7,500 square miles, only 2,500 people, the Park’s employees, live there permanently. Of them, a mere 600 or so are the rangers, the men and women charged with the care and protection of this great conservation area. The only other living things in this vastness are the animals and plants—mammals, birds, reptiles, trees, and shrubs, down to the tiniest of the uncountable millions of insects and microscopic life. A forbidden resource, only temporarily accessible to about a million lucky tourists every year.

And it doesn’t end there. All the adjacent private game reserves: Sabi Sand, Manyeleti, Timbavati, Klaserie, Balule, Thornybush, Kapama, and others place a further buffer along much of Kruger’s western border. These are places that only the wealthiest tip of South African society can afford. Almost exclusively, they cater to rich fly-in, fly-out, tick-the-big-five westerners.

I have flown low over Kruger’s western fence line. To the right, endless, uninterrupted African “bush.” To the left, an equally endless rural sprawl—a dusty red-brown patchwork of postage-stamp-sized homesteads interconnected by a spider-web network of even dustier roads. Schooling, medical care, and access to everyday amenities are scarce and underfunded. Shops and workplaces, such as they are, are distant and expensive to reach.

And this is just on the South African side of Kruger, for the Park lies along the country’s eastern limits. To the north lies Zimbabwe and to the east is Mozambique, where poverty and desperation make South Africa seem like El Dorado. Adding to the dismal picture is nearly a year of Covid-19 and the abrupt cessation of tourist activity, which has ripped the guts out of these struggling economies. Sadly, to this calamitous mix, we have to add endemic corruption at every level of society and the appalling incompetence of municipalities and other local government institutions to deliver even the most basic of services.

Kruger is not alone, for it is a story that repeats itself the length and breadth of Africa. Unless these socio-economic issues are addressed, the continent’s great conservation areas will inevitably become increasingly under siege, and, sadly, it seems inevitable that many will succumb.

NGOs and other charitable institutions do unbelievably important work in the upliftment of people. But with the best will in the world, they can only do so much. Often the only result is making desperately poor people slightly less poor. The answer: education and opportunity on a monumental scale, and an overarching vision, a vision that embraces the aspirations of people and the needs of conservation, a true melding of the two. It can be done, but it requires leadership of the sort that Africa seems incapable of producing.