By NewsroomOctober 1, 2021Rescue and rehab
No Comments 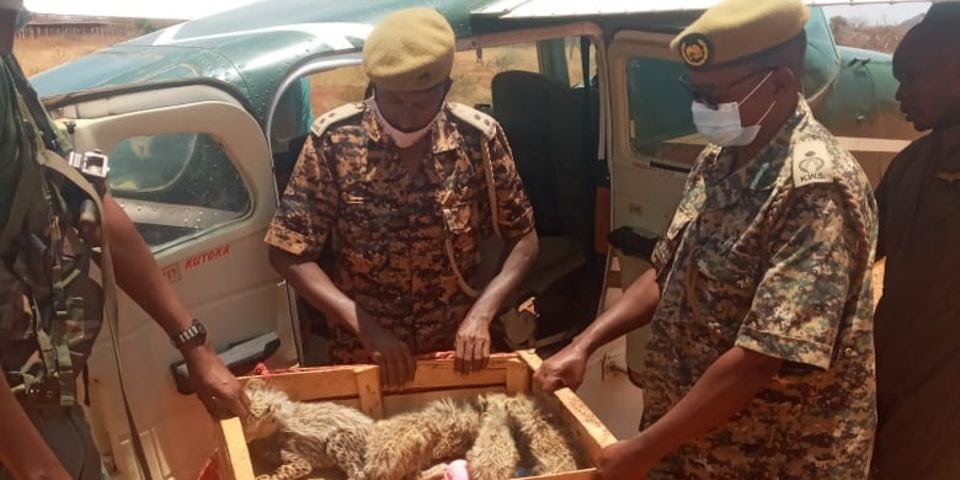 The rescued cubs with KWS officers. Image: As originally published by Nation.

The four cubs were rescued within the Shimbir Fatuma area and taken to Takaba (Mandera West) before being airlifted to Nairobi.

“We received a report on the presence of cheetah cubs within the Mandera South area from a herder and found them abandoned by their mother,” KWS Mandera Warden Abdikadir Adan said.

According to Mr Adan, the mother cheetah could be dead after it failed to show up for its young ones for about three days.

“We were informed that for about three days, there were no signs of the mother checking on her cubs and after we arrived, we stayed in the area for about 24 hours but still we could not trace the mother,” Mr Adan said.

He said it was abnormal for the mother cheetah to wander far away from her cubs.

A cheetah can also abandon its cubs when there is shortage of food supply.

Mr Adan said the cubs are estimated to be less than two months old and that they looked weak when they were found.

Cheetahs are usually solitary animals with males and females only coming together to mate. Females raise the cubs on their own.

A cheetah has a gestation period of 90 to 95 days and gives birth to a litter of approximately three to five cubs weighing about 250 grams each at birth.

Mr Adan lauded the herder for rescuing the cubs.

“We appreciate this good gesture by this herder who found these cubs and called us. We need to take up the responsibility of conserving our wildlife and that is what is happening across Mandera,” he said.

The four cubs were flown to Nairobi by Mr John Wambua, the assistant director of northern conservation area.

In Mandera, there is Malkamari National Park and Chachabole conservancy but the two, despite being gazetted, are yet to start functioning fully.

Malkamari was gazetted in 1989 but no active conservation management activities have taken place in the park.

The park, which is approximately 900 square kilometres, remains probably the least visited national park in the country due to regular clan conflicts around it.

Situated along the Dawa River on the Kenya-Ethiopia border, the park has been cited as the cause for inter-clan clashes pitting the Garre and the Degodia clans in Mandera County.

“We are in the process of establishing three more community conservancies in Mandera in our bid to increase space for wildlife,” Mr Adan said.

The Mandera KWS office is faced with challenges including lack of vehicles for patrols. The only vehicle was reduced to ashes in June after suspected Al-Shabaab militants hit it with an explosive, killing at least two people.