DURBAN: Police have launched a manhunt for a group of poachers who abandoned their vehicle and fled into bushes in the KwaZulu-Natal area of KwaMsane in the early hours on Wednesday morning.

According to police spokesperson, Captain Nqobile Gwala, police were conducting crime prevention duties in the early hours of the morning when they saw a vehicle on the N2 freeway.

“When the suspects spotted the police they abandoned their vehicle and fled the scene on foot into nearby bushes. Police officers searched the vehicle and recovered an unlicensed 303 rifle with ten rounds of ammunition, three knives and rope,” Gwala said.

She said the men were believed to have been rhino poachers. Gwala said police are investigating further and trying to trace the men. 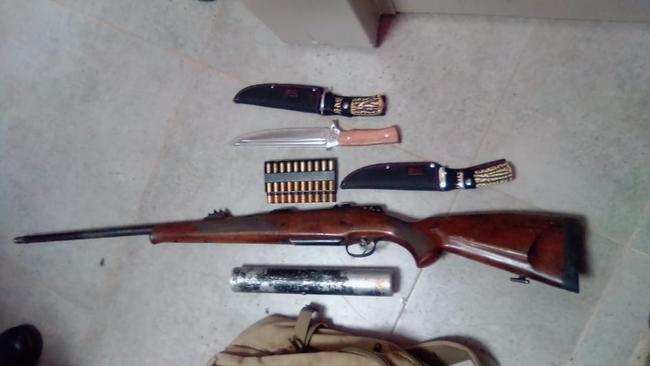 Original image from The Independent Online: A group of men, believed to be rhino poachers, fled in the early hours of Wednesday morning after police intercepted their vehicle on the N2 in KwaMsane. Pictured are the items that police recovered from their abandoned vehicle.

Earlier in the week, it was reported that two suspected rhino poachers were shot dead at the Hluhluwe-Imfolozi Park.

While the two died at the scene, a third person managed to flee. Police recovered a high-calibre hunting rifle and knives which were thought to be used when removing rhino horn. One of the men is believed to be a well-known poacher and had been previously charged for being in possession of rhino horn.

Meanwhile, the DA has called for decisive action to be taken to secure the future of rhinos.

“Ultimately, a strong message must be sent. Poaching gangs must know that force will be met with force, and convictions mean protracted jail sentences. Our rhino do not belong to Ezemvelo KZN Wildlife – they belong to the citizens of our province and country. Decisive action is needed to secure their future,” DA KZN spokesperson on Economic Development, Tourism and Environmental Affairs, Heinz de Boer, said.

He said Ezemvelo rangers and security staff are at the sharp end of this low-key war that plays itself out in the deep bush of our reserves each day and government needed to support their efforts.

“Key to combatting the scourge of poaching is the proper equipping of rangers, a fundamental change in the minimum sentencing criteria for poaching – and the bolstering of support for specialist prosecutors and courts,” he said.