The mention of Lake Nakuru National Park sparks memories of the famous flamingo carpet on the lake’s shores that has provided a phenomenal aerial view for decades.

Although things are different due to the reduced number of the birds owing to migration, the park still has a thousand reasons to be rated as one of Kenya’s major tourist attractions.

As you enter the park, the view of the expansive lake surrounded by tall acacia trees tells a story of how much the lake has expanded over the years.

Along the corridors, you experience the first view of wildlife, the baboons, freely interacting with visitors. As you go round the lake from the right, your first stop is the baboon cliff.

This is where you find baboons and monkeys with their young ones moving around in dozens. 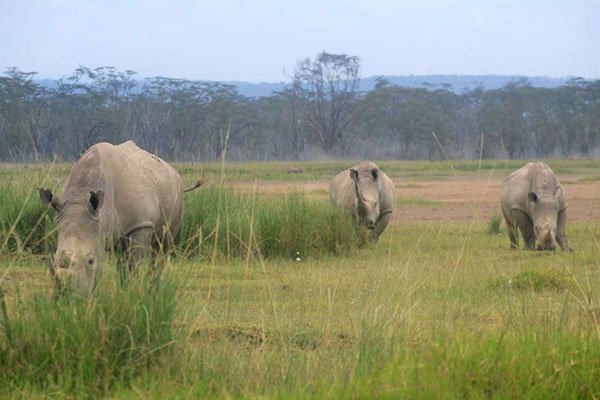 This is the baboon’s main territory because of the elevated nature, and they like it because it offers security from predators as they can see them approaching from a distance.

Here, tourists stop to take pictures with the background of the lake for memories sake.

As you drive further, you approach the rocky ‘Out of Africa’ site. “Before the lake expanded, the shape of the lake used to resemble the map of Africa and thus the name… out of Africa viewing Africa,” says our tour guide.

Driving downhill towards the southern part of the park, you come across Enasoit hill, also nicknamed Migingo, a place you are likely to spot lions.

This is a secluded hilly place in an open plain where lions like to hang out and spot for prey.

As you continue driving round the lake, you come across the airstrip mainly used by Kenya Wildlife Service (KWS) officials for their activities. This is near the camp-site as you approach Makalia water falls.

The water falls are named after Makalia River which originates from Mau Forest.

The serene lake shore is painted with the vast bird species feeding from a variety of vegetation.

The premium park is home to 50 mammal species and more than 450 bird species both in the marine and dry land.

The park is also home to lodges where visitors can reside during their trip. They include Sarova Lion Hill Game Lodge, Lake Nakuru Lodge, Sopa lodge, The Cliff and Flamingo Hill Camp tented camp.

The park is also famous for its rhino sanctuary and a critical breeding ground.

It was extended to its current size of 188km² in 1984; it was established as the first government-managed rhino sanctuary.

In 1987, it was declared a Ramsar site because of its importance as a wetland, and recently, as a World Heritage Site alongside lakes Bogoria and Elementaita under the Rift Valley system.

In August 2005, the park was branded as a ‘Bird Watchers Paradise’ famous for its display of flamingos under the KWS-driven park branding programme.